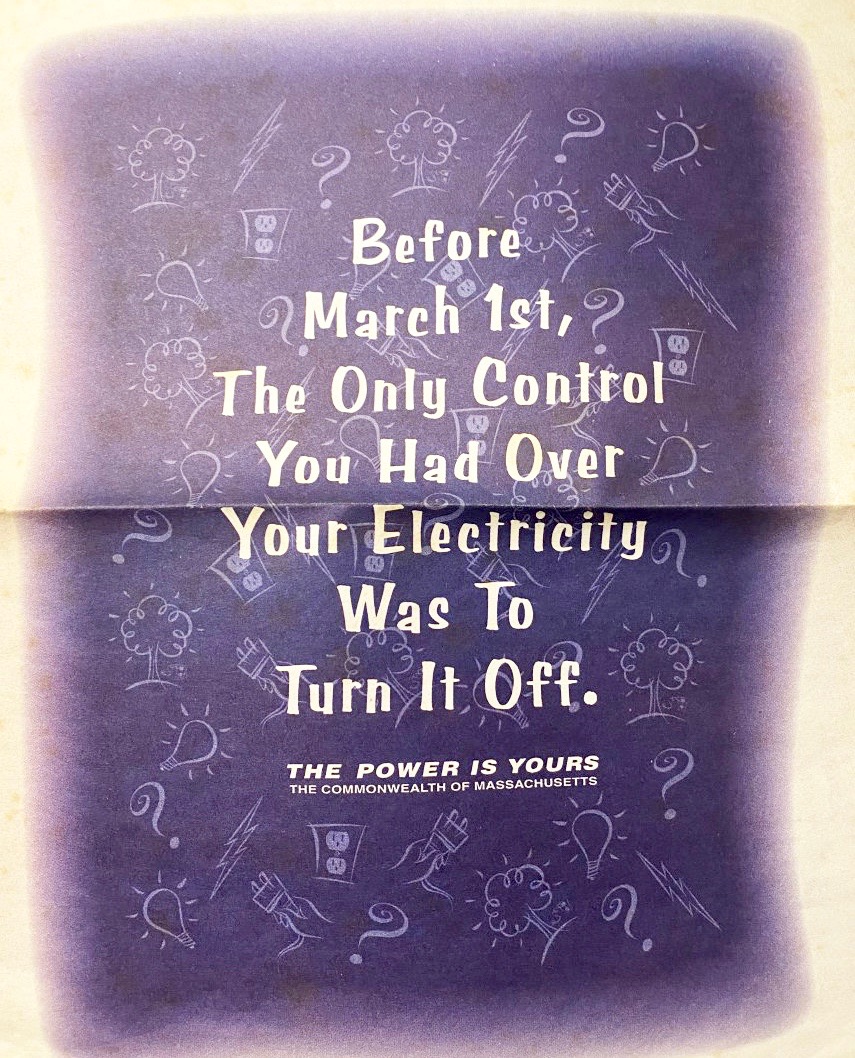 The power is yours – not yet. Richard Asinof

Photo: A brochure promoting the restructuring of the electric utility industry in Mass. in 1998

I have followed the ongoing problems with the power gird in Texas and in California with more than a passing interest, given my experiences in managing the multi-million public information campaign for the Massachusetts Division of Energy Resources in 1997 and 1998, when the Commonwealth joined in a national frenzy to deregulate the electric utility industry and create what was hoped to be a competitive market for buying and selling electricity to consumers.

I then served as the marketing manager for the Massachusetts Renewable Energy Trust, which had been created as part of the “restructuring” legislation enacted by the Massachusetts legislature, with a bankroll of $250 million to invest in furthering the development of renewable energy technologies in the Commonwealth.

I dug through my five-drawer metal filing cabinets, relics of my data storage system that is ancient and efficient, to find a copy of the brochure that was printed and inserted in every daily newspaper and weekly newspaper in Massachusetts, with the headline: “Before March 1st, The Only Control You Had Over Your Electricity Was To Turn It Off,” to be followed by the promise when you turned the page, “Now, The Power is yours.”

The problem was: the power was never going to be the consumer’s, despite the best messaging in the advertising insert supplement, of which more than 1 million copies were printed on a full-color offset press located in the Quonset industrial park in Rhode Island.

[How a printing press in Rhode Island got the contract as a minority business owner for a Massachusetts state job is a story much too complicated to try and explain. But I arrived late one afternoon in mid-May of 1998 to oversee the final press run, proofing to make sure that the colors were accurate. The initial design of the brochure had included nothing but white people as consumers, which I had insisted that the advertising agency change to make the customers in the advertising insert more diverse – one of the few arguments that I won with the advertising agency.]

The art of deception
The roots of restructuring could be found in the problems faced by the electric utility industry and its over-investment in nuclear power, which turned out to be unsafe, uneconomical, and unnecessary, just as Sam Lovejoy, the No Nukes activist, had declared in 1974, when he loosened the guy-wires attached to a weather monitoring tower on the Montague Plains, toppling the structure, and then hitched a ride with a local police cruiser to the police station in Turner Falls, where he announced his intention to put nuclear power on trial – in particular, the twin nuclear reactor power station planned for Montague by what was then known as Northeast Utilities – through his act of civil disobedience. Lovejoy was found “innocent” of the charges against him at a trial  held in the fall of 1974, and documented by the splinter group of the Liberation News Service known as Green Mountain Post Films in film entitled “Sam Lovejoy’s Nuclear War.”

Five years later, Lovejoy would be at the helm of a group known as Musicians United for Safe Energy, or MUSE, that sold out Madison Square for a week, all to promote the end of nuclear power, in the mistaken belief that rock ‘n’ roll could save the world.

The Montague, Mass., nuclear power station was never built, because the economic rationale for building the plant submitted by the utility turned out to be bogus – it had been prepared by a college summer intern. But that is a story for another day.

The bottom line
By the late 1990s, the electric utility industry had worked itself into an economic pickle over its investments in nuclear energy. In order for the power plants created by the massive investments in nuclear energy to meet the standards of regulation and be allowed into the rate base by utility regulators, the electricity had to meet the standard of being “used and useful,” in order to be paid for by consumers.

Quite simply, the dream that nuclear power could provide electricity too cheap to meter had turned into a deadly nightmare of soaring electricity rates, limited storage options for nuclear waste, and meltdowns.

The problem was that the investments in nuclear power would never prove to be economically worthy. The failing finances and huge economic debt burden created the need to absolve the electric utility industry of its massive debts over what was known as stranded costs.

Translated, the effort to “restructure” the electric utility industry in Massachusetts was a scheme to allow the power companies that had unwisely invested in nuclear power not to be held liable for their poor investment strategy.

The carrot to do so was the illusion that there would be a consumer-driven market created in which the debt-laden power plants would be separated from the economic equation, and at the same time, there would be investments in renewable energy and even public power options. Further, the dirtiest power plants – the coal plants operating in Massachusetts known as the “filthy five” – would be eliminated from the grid.

Many of the promises didn’t happen. The coal plants continued to operate for another two decades. For residential consumers, a functioning consumer market was never created. Instead, what occurred was massive consolidation of the electric utility industry, with National Grid, a British-owned conglomerate, seizing control of most the electric and natural gas utilities in the Massachusetts and Rhode Island region. They even developed a catchy advertising campaign: “Always been there; always will be there,” to sell their consolidation plans.

The real money, it turned out, however, was to be made in the charging consumers for the transmission of electricity over the grid’s infrastructure. Which almost gets us to what happened with the failing grid in Texas and California –and earlier on Aquidneck Island, with the freeze out of the natural gas infrastructure. But not quite yet.

The cost equation
Pricing of electricity is determined according to peak market demands – the availability of the constant flow of electric power when peak demand is greatest, which usually happens during the hottest days of summer in New England. But a funny thing began happening during the last few years: the large growth in behind-the-meter rooftop solar in New England sufficiently dropped demand for electricity during the summer’s hottest days, lowering peak demand. [See link below to ConvergenceRI story, “Behind the meter solar is transforming the utility market.”]

It was an unintended consequence of investments in renewable energy, not predicted or expected by ISO New England, the organization that is charged with managing the electricity grid in the region. They were pleasantly surprised to find that peak demand was decreased by some 2,000 megawatts during the summer of 2018.]

[Unlike in Texas, ISO New England takes its job of managing and regulating the flow of electricity on the grid seriously. Among other initiatives, it has sought to develop strategies around energy efficiency to lower peak demand.]

Behind-the-meter solar is far different than the efforts to construct huge,, utility-size solar power plants, including the most recent solar farm approved to be built in East Windsor, Conn., a 120-megawatt power plant from which Rhode Island is scheduled to buy some 50 megawatts of electricity from the 485-acre site.

The other “unintended” consequence of utility restructuring is that the electric power industry placed its investment bets on building natural gas-fired power plants in New England, which initially seemed like a prudent bet, but also floundered. See link below to ConvergenceRI story, “In the shadow of no towers.”]

The proposed gas-fired power plant planned for Burrillville, promoted heavily by outgoing Gov. Gina Raimondo, could not overcome the question of economic need for the plant.

What went wrong in Texas, in California – and in Rhode Island
In Texas, elected officials chose to try to avoid any federal regulation around how it managed its electric utility grid, which meant that it was woefully unprepared for the polar vortex that swept south in February. Despite the big lies told by the Texas governor and by Sen. Ted Cruz, and magnified on the echo chamber that is Fox News, renewable energy had nothing to do with the catastrophic failure of the electricity grid – it was the failure of the state to weatherize its natural gas power stations, despite frequent warnings.

Similarly, in California, problems with the electric grid were closely tied to the lack of infrastructure investments by Pacific Gas & Electric in how it managed its power lines, which have been linked to the sparking incidents that allegedly caused some of the most devastating fires in recent years.

The problems with management of both grids can be traced back to the electric utility restructuring efforts undertaken in the late 1990s, and the efforts by Enron to game the competitive market system. Translated, it was all about greed, not consumer choice.

Here in Rhode Island, problems with the natural gas infrastructure have been tied to ongoing problems with pipeline management issues. The question now before the R.I. General Assembly is whether or not National Grid will be allowed to make fixes to the infrastructure that may prove more costly for customers in the future.

Without the excellent, tenacious reporting by Steve Ahlquist at Uprise RI and Tim Faulkner at ecoRI News, much of the story would not have been told. [Both outlets, along with ConvergenceRI, were inexplicably left out of Dante Bellini’s recent list praising news reporting in Rhode Island.]

Mea culpa
In writing this story, ConvergenceRI must grapple with the fact that his talents and expertise were exploited to the fullest extent to sell consumers a bill of good about electric utility restructuring in Massachusetts.

At some point, I will be comfortable in retelling some of the more lurid details of what went wrong and why. Instead, the focus deserves to be on efforts now underway at the R.I. General Assembly to carve out a different approach to renewable energy, climate change, clean air and clean water, in a comprehensive package of legislation, along with a grassroots campaign to promote the proposed laws in a state where all too often the media does a terrible job of reporting on the progressive forces at work who are attempting to change the status quo. [See link below to ConvergenceRI story, “Warning: Ignore at your own risk.”

At some point, hopefully, consumers will be able to say, correctly, that the power is theirs.