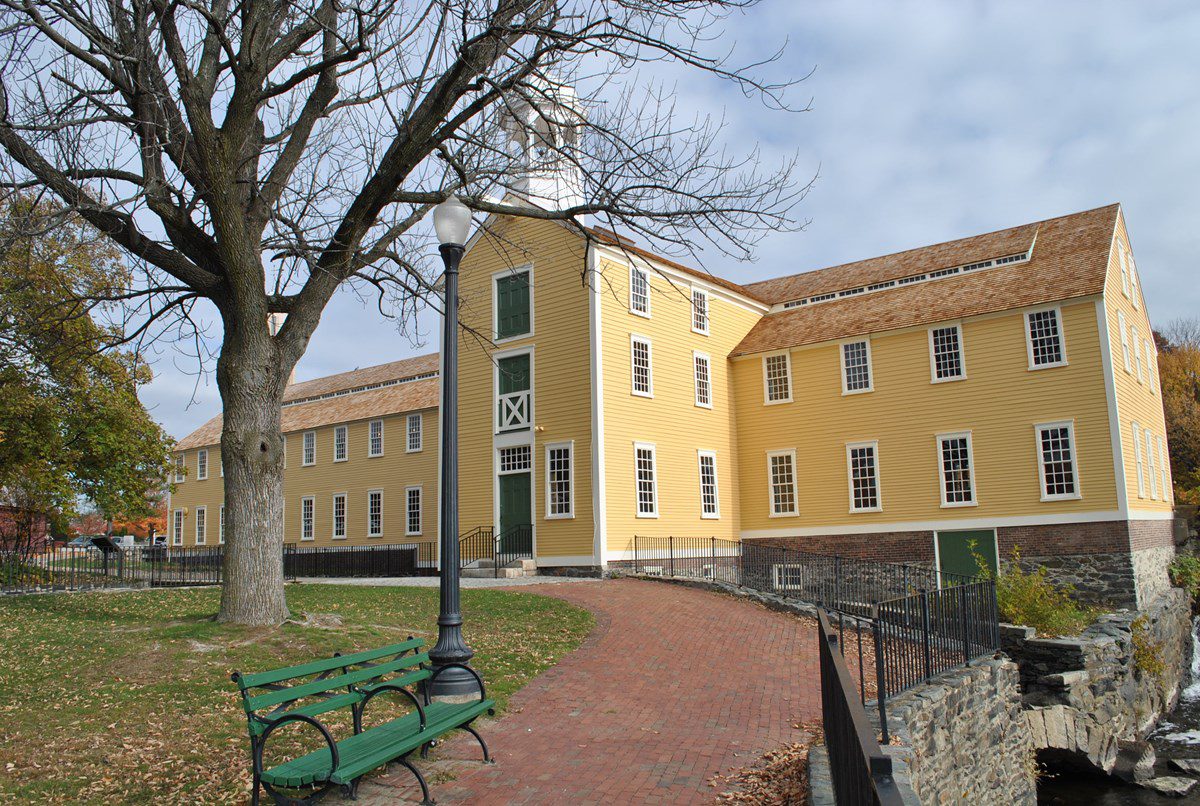 The Slater Mill Field Trip: in the footsteps of Samuel Slater – Herb Weiss

In Pawtucket’s downtown, you will find historic Slater Mill, consisting of the Slater and Wilkinson Mill and the Sylvanus Brown House, sitting on five acres of land on both sides of the Blackstone River, a mill that celebrates America’s Industrial Revolution to generations of visiting students.

Pawtucket resident Patricia S. Zacks fondly recalls her field trip to Slater Mill almost 60 years ago. “We were escorted single file by all the machines. Some were even operational, she said.

Looking back, the former student from Curtis Elementary School says, “it was a rite of passage for every elementary student to pass thru the old mills’ doors,” says Zacks. “We went home with a little piece of cotton. It was a very special day for me,” she says.”

Like Zacks found out, the Slater Mill Field Trip is as iconic as many other Rhode Island institutions. Many Rhode Islanders between the ages of 10 and 75 have experienced this “rite of passage”, of sorts, for elementary school students in the state, particularly 4th graders.

As authentic as you can get

“Slater Mill is authentic as you can get; it’s not recreated like many historical sites scattered throughout the nation,” says President Robert Bllington, of the Blackstone Valley Tourism Council. “When visiting, the young students walk on 200-year-old floors, he says, actually walking on the fir wooden planks that Samuel Slater, the Father of the American Revolution once walked on”.

“It’s hard to find a museum that makes things right in front of your eyes. Slater Mill is that place for the young students,” he notes.

Although, the Older Slater Mill Association’s (OSMA) bylaws recognized the museum’s important role in educating children about future careers in the textile industry, things didn’t happen immediately. In 1921, the non-profit was founded to work on saving the historic mill. Efforts to restore the mill began in 1923, restoring the mill to its 1835 appearance.  During a 1961 Annual Meeting, OSMA President Norm MacColl recalled the mill for “nearly 30 years that stood as a shell, seldom used and sparsely visited.”  He suggested that there was not an education program nor much student visitation prior to this.

Student visitations began in the mid-1950s, when East Avenue School in Pawtucket and schools as far away as South Orange, New Jersey, and New York City, came to the city to visit the mill. Admission fees for the visiting students were kept affordable by the OSMA, with adults being charged 50 cents and 25 cents for children.

In 1962, a new record was set as 28,648 visitors came to Slater Mill, half being students. By 1974, inflation and the energy crisis had an impact on student visits to the mill. During this year, OSMA hired Cynthia Dougherty to be its first dedicated school services staffer, a position that would grow to a full-time Curator of Education. OSM’s education staff brought the “Museum on Wheels” program to bring Slater Mill’s history to schools.

By May 2003, Slater Mill staff were dressed in simple “period” costumes, which were upgraded a few years later, says Rosemary Danforth, former Outreach Program Presenter, and an on-site interpreter who joined the OSMA staff in 2002. “That became a selling point for some of the teachers,” she remembers.

OSMA staff worked closely with visiting teachers, coordinating the onsite experience with their curriculum, says Danforth, with staff fitting the tour to the specific educational level of the visiting students.

Over the years, the number of students would fluctuate, being tied to gas shortages and the economy. Just a few years ago state education policy advised that families should not be approached to support the cost of field trips due to potential inequities that would reduce the number of student visits.

Funding to support the OSMA’s operations and programs would come from the city of Pawtucket, state and federal grants, civic groups including the Rotary Club of Pawtucket and from local businesses. These contributions led to the first free field trip offerings for RI public schools.

Before the pandemic, Lori Urso, Executive Director of Slater Mill, recalls that “we typically had 7000 – 8000 students per year, counting those who came to the site, and those whose schools our staff visited. Some years it even reached 10,000.

According to Urso, the Field Trip has evolved to a more STEAM-based, and place-based objective. In response to educator feedback asking for more hands-on activities at the museum, a fiber arts studio component was introduced, with a participating artist, to compliment the science and tech aspects. It was a highly-praised program that unfortunately came to a halt with the onset of the COVID pandemic, closure of schools, and elimination of field trip programs.”

“The timing of the return of the Slater Mill Field Trip remains unclear at the moment,” says Urso. “The National Park Service is eager to welcome students back to the mill in the future, but much of this depends on the policies of the individual school districts, and priorities for student and teacher safety,” she says.

For more details about OSMA, go to https://www.oldslatermillassociation.org/.

Editor’s Note: About 20 years ago people were given the opportunity to use some of the oldest looms to create handwoven items. Nancy Thomas, editor, attended the one-week camp, creating a scarf after a week of moving warp and weft in a building with chill coming through the windows on long winter mornings. “You could feel history in your hands; it was a profound experience to work for pleasure where others surely toiled”.

For more information about the Old Slater Mill Association and its 100th year anniversary, go to