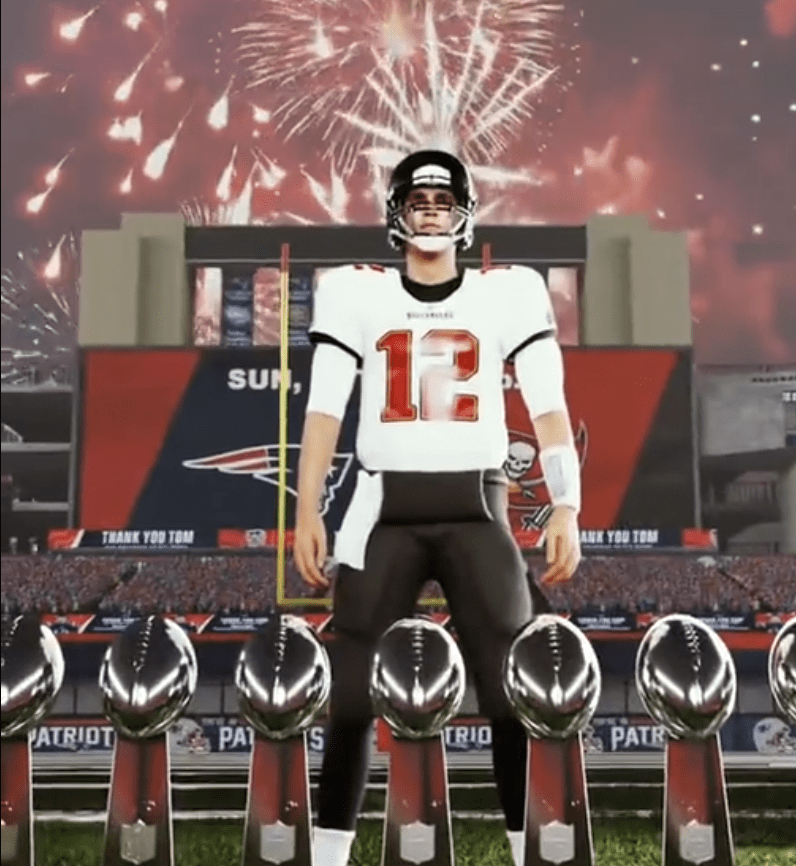 You always know what the importance of a sporting match is when it earns its own unique name or number. The Super Bowl is an example by having the significance of the game noted by using Roman numerals. That cannot be said for the NBA, NHL, or MLB. Other events have risen to the point where they have earned their own title, too. How can you forget the “Thrilla in Manilla”? When Muhammad Ali and Joe Frazier squared off, and now virtually any big boxing rematch in the world for that matter.

So, is it any surprise to anyone that the game between the Tampa Bay Buccaneers and the New England Patriots has been titled as “The Return”? The game that will bring former Patriot’s Quarterback, aka, the G.O.A.T., Tom Brady, back to New England, as the leader of Tampa Bay, to face off against his former team and his former Coach, Bill Belichick.

When we last saw Brady he was, as usual, in that position we’ve gotten used to seeing – hoisting up a Super Bowl trophy – this time in his first season at Tampa Bay. This was the same man whose coach deemed too old to continue as a top-level quarterback in the NFL and was figured to be less effective as the games and seasons pass. The Coach wanted to move on and get out from under the Brady shadow. The Coach was getting tired of the “who made who” noise. He was certain that he got as much out of Brady as he could (or he thought so), and in his mind, players get old, they hang on too long, and teams suffer from this.

However, coaches, especially the successful coaches, go out on their terms. Halas, Lombardi, Knoll, Walsh, Landry, and Shola to name a few, all went out on their terms. This is how Belichick was planning the end of his career. On top, and on his own terms but there was that nagging murmur in the background that if it weren’t for Brady, Belichick’s career could have ended like it did in Cleveland when after a couple of years at the helm of the Browns he was fired, and his head coaching days appeared to be in shambles.

The unbelievable series of events that happened to put these two legends together was improbable. For the coach who was rescued off the heap by Robert Kraft who was a new owner of an NFL franchise and had already hired a couple of high-profile head coaches. Bill Parcells came in and changed the entire mindset in New England. That lead to a Super Bowl loss to the Green Bay Packers in the mid 1990’s, but that relationship imploded and soon afterwards Parcells was gone. The next coach brought in was Pete Carroll, a young coach with no head coaching experience. Although many years later Carroll would himself lead the Seattle Seahawks to a Super Bowl championship, he was ineffective as the Patriots head coach. Kraft decided to roll the dice and bring in Belichick to take over, at the time, what was a floundering Patriots team.

Brady came to the Patriots as a late pick in the draft with little expectations of even making the team; the third Quarterback behind the Patriots franchise quarterback Drew Bledsoe, who was drafted under Parcells and lead the Patriots to a Super Bowl. Brady’s break came when New York Jets linebacker Moe Lewis tackled Bledsoe and essentially changing the whole history of an NFL franchise; in stepped Brady and history was made. Twenty years later, 6 Super Bowl Championships and virtually every record a quarterback can hold was held by Brady. The question began to emerge with every Super Bowl win, with every record shattered with every milestone passed, who made who?

Immediately, walls between the two went up several years earlier, when the coach began to openly search for the quarterback’s replacement. He thought that he had found it but because the quarterback, the G.O.A.T, wasn’t ready to just leave yet, the owner intervened on behalf of the player, deciding that they were going to honor the contract and let Brady finish his career as a Patriot. No player, not even the great Tom Brady, could continue to play at that top level much longer. The coach went on to trade the young quarterback, the future leader in waiting, away. Was this out of spite, or because he wanted to force this aging quarterback out of New England? As we know, during all this going on, the Patriots won their 6th Super Bowl.

The following season was the season that Brady decided that he wanted out. Fresh off the Super Bowl win the Patriots were having salary cap issues and top end talent were not being re-signed. Brady’s longtime friend and teammate Rob “Gronk” Gronkowski retired, and Brady was left with little talent around him. The riff between Brady and Belichick grew to the point where Brady made the decision to look for employment elsewhere. Signing with the Tampa Bay Buccaneers in the 2019 off season, Brady was able to talk Gronkowski and exiled wide receiver Antonio Brown to join him. The result was Tampa Bay came out of the gates as a midseason also-ran but went on a roll that ended with the celebration of a Super Bowl win, the 7th for Brady and for the coach? A 7-9 record, no playoff appearance, and a lot of questions on his coaching abilities, his continued limited communication with the press and his apparent arrogance was now wearing thin in New England. This is what happens when you’re no longer on top. So, the question was being answered, Brady made Belichick!

Fans in New England began questioning coaching decisions or personnel or game management and if the game had passed him by. Clearly the fans of the Patriots forgot about the failures of pre-Brady era and were spoiled by the success of the team under Belichick’s leadership. But this is what happens for the coach who has a military mind, and forgot the saying, “those who forget the past are destined to repeat it.”

So, the two will meet on the gridiron. The re-structured, re-tooled New England Patriots will face off against the G.O.A.T. and his defending Super Bowl championship team on a primetime, Sunday Night Football Game of the Week. All eyes of football fans and non-fans alike will tune into “THE GAME”. Because of the event, the spectacle, and the promotional build up, the only thing the fans hope is that the game lives up to the hype!