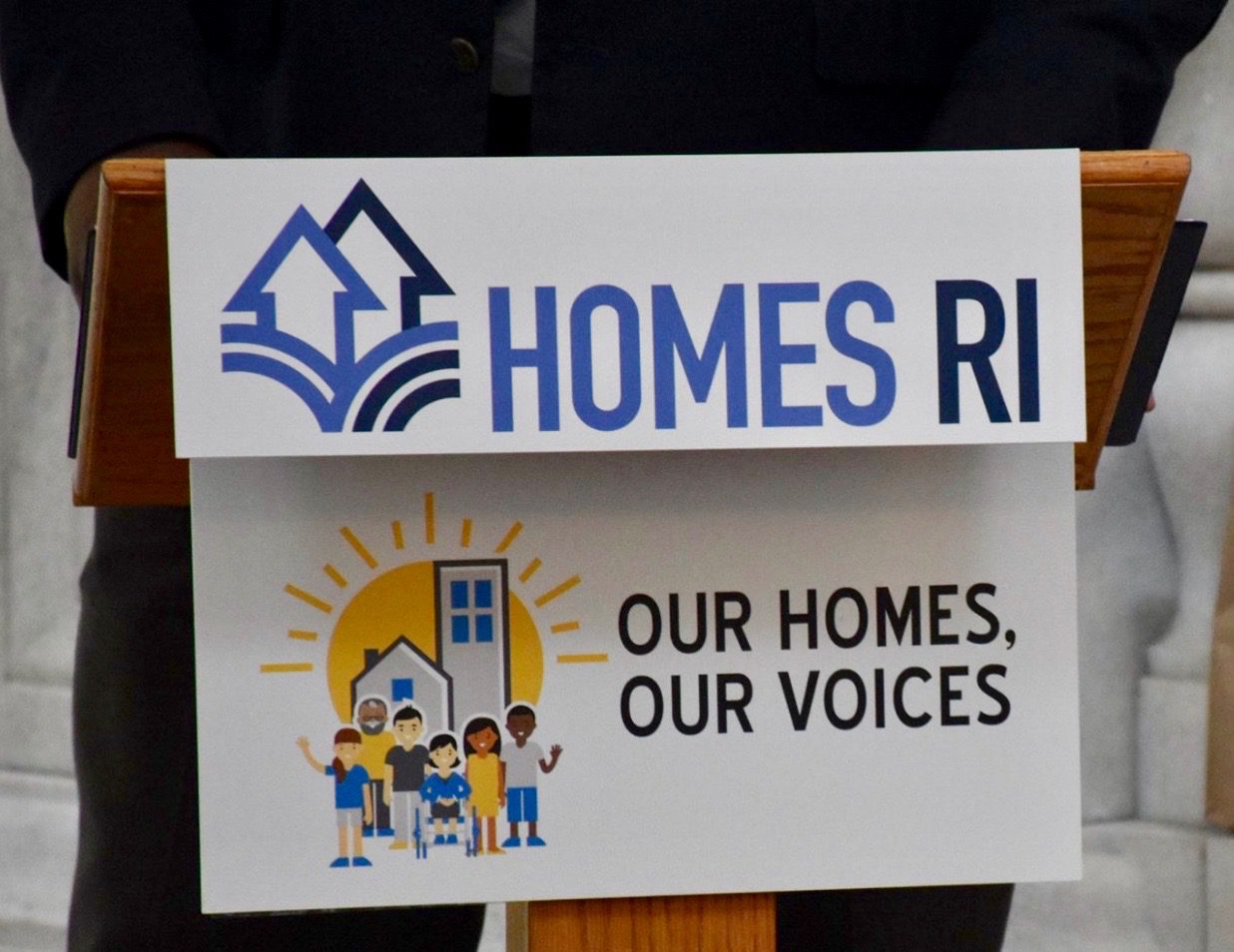 Homes Rhode Island, a coalition of housing advocates, has developed a number of strategic asks for the Governor and the R.I. General Assembly to pursue

Everyone pretty much agrees that Rhode Island is in the midst of an affordable housing crisis as the state prepares to enter the third decade of the 21st century. Housing may be the place where jobs go to sleep at night, but what if there is no place to go?

The reasons behind the crisis are not a mystery:

• The high cost of housing, with one-third of households paying more than 30 percent of their income for housing costs in 2019, reflective of a decade of wage stagnation. Most middle-class families have been priced out of buying a home in the current booming real estate market.

• The lack of new housing starts to keep up with demand; in 2018, only 1,294 residential building permits were issued statewide, with three-quarters being issued for single-family homes. Based on projections of Rhode Island’s future housing needs, the state should be building closer to 3,000 homes per year, with a greater emphasis of multi-family living.

• The lack of a dedicated stream of state government investments to support the production of affordable homes in Rhode Island, compared to our New England neighbors. Per capita, Rhode Island spends $21.90, compared to $100.88 spent by Massachusetts, $95.78 spent by Connecticut, and $77.88 spent by Vermont.

• An aging housing stock that is expensive to operate, maintain and keep safe, which is particularly burdensome to the urban core cities of Providence, Pawtucket, Central Falls and Woonsocket.

Evidence of the symptoms of the housing crisis can be found and documented across Rhode Island: a rising homeless population, with children making up 17 percent of the people using emergency shelters; an increase in evictions; a continual churn of families forced to find affordable housing, playing havoc with education and health outcomes; and an increase in the number of families and children living in poverty in Rhode Island, according to the latest Census data.

The question remains: what steps need to be taken to solve the crisis? It would be great, as Brenda Clement, the director of HousingWorks RI, explained, using the prop of a red easy button from Staples, as moderator of a panel discussion entitled “Housing Programs in Rhode Island,” at the first Homes Rhode Island annual summit held on Wednesday, Dec. 11, at Rhode Island College, if all that needed to be done was to press such a button and new housing developments would happen.

The reality, however, is that many developments can take as long as 15 years to complete, according to Joe Garlick, director of Neighborworks Blackstone River Valley.

What is needed is a comprehensive, strategic approach, something that Homes Rhode Island is pushing forward.

The stage is set
The Homes Rhode Island summit, an all-day confab, attracted a full house of participants, despite the snowy weather, and with it, building a coalition of housing advocates with a committed agenda and strategy, as carefully laid out in a 30-page booklet.

[The Homes Rhode Island coalition, two years in the making, is supported by HousingWorks RI, the Housing Network of RI, United Way of Rhode Island, the Rhode Island Foundation, numerous community development corporations and housing authority partners, among others.]

The well-orchestrated event connected the dots between housing and health care, housing and education, and housing and the struggle for civil rights, seeking to build a public narrative for social change and civic engagement.

“The Homes Rhode Island coalition is a group of housing advocates that have come together to address the issue in a unified way, and the session left everyone feeling a renewed sense of hope,” said Jeanne Cola, executive director of Local Initiatives Support Corporation. “We understand that there are real people involved who are in desperate need. This session, and the [earlier] session that was done by CommerceRI and the Governor, has left everyone feeling positive that we will be addressing the issue and making real change in the coming months and years.”

Your zip code is more important than your genetic code
In October, the release of the first annual Rhode Island Life Index, created by Blue Cross and Blue Shield of Rhode Island, in partnership with the School of Public Health at Brown University, provided a boost for the work of Homes Rhode Island, with its finding that housing emerged as the key factor in analyzing health care needs around the social determinants of health. See link below to ConvergenceRI story, “Taking the pulse of Rhode Island life.”]

• $50,000 to the Housing Network of Rhode Island to support communications and visibility of the Homes Rhode Island campaign.

• $50,000 to Crossroads Rhode Island to support the Health Navigator Program.

• $30,000 to the Village Common initiative to accelerate the development of new villages.

In making the grants, Blue Cross said it did not anticipate identifying future kinds of investments in housing initiatives, such as efforts to build affordable housing near hospitals as a way to reduce health costs.

“We recognize that we are not housing experts and will be looking to the many affordable housing advocates in Rhode Island, who are truly the experts in this field, to explore any and all ideas,” said Carolyn Belisle, the managing director of Community Relations at the health insurer.

Momentum
The release of the Rhode Island Life Index, coupled with the release of the 2019 Housing Fact Book, with its daunting analysis, created the impetus for Gov. Gina Raimondo and CommerceRI to convene a housing forum on Nov. 14. [See link below to ConvergenceRI story, “1 in 3 RI households are facing housing cost crisis.”]

What has not yet been reported is that there is a lively conversation, still private, occurring between the leaders of Homes Rhode Island and the Governor, to try to develop a consensus on the best strategies moving forward, with an eye on next year’s budget.

The focus of the “asks” by Homes Rhode Island coalition emphasize the need for a dedicated funding stream for state investments to build and preserve safe, healthy and affordable homes. These include:

• A permanent funding source of at least $8 million to support the production and operation of rental housing serving households at or below 80 percent of the Area Median Income, or AMI.

These funds would serve as gap financing for the construction of new units and would make available project-based rental assistance to more appropriately serve extremely low-income households.

• A permanent funding source of at least $4 million to support the preservation of expiring affordable units. This would ensure a source for much needed capital improvements and reinvestment to renew the term of affordability on developments that are at risk of expiration.

• A $25 million bond referendum in 2020 to refund the Building Homes Rhode Island program, which is administered by the Housing Resources Commission. These funds would be available over a two-year period.

In addition, the Homes Rhode Island coalition is also pursuing low- or no-cost legislative strategies that would have broad impact on housing. These include:

• Source of income protection for Rhode Islanders. This would reduce barriers to accessing existing units for Rhode Island renters. State funding is needed for outreach, education and enforcement to ensure successful implementation of this strategy.

• Eviction proceeding protection for Rhode Islanders, including the sealing of court files in eviction cases in which the case is dismissed or the tenant is not found at fault. Sealing eviction records would reduce barriers to accessing existing units.

• Language correction to the Real Estate Conveyance tax. At present, affordable housing is negatively impacted be being taxed on transactions that do not constitute real estate transfers. The language correction would improve the effectiveness of our previous and current investments, as well as the financial stability of housing developments with limited rental income.

“Shelter is one of life’s most basic necessities, and is the cornerstone of the quality of life in any state or nation,” said Melina Lodge, executive director of Housing Network of RI. “Thoughtful and deliberate investment in housing can support economic and workforce development, health equity, strong families and communities, and reduces housing insecurity and homelessness.”

Lodge continued: “Homes Rhode Island believes that a comprehensive housing package which prioritizes investments in the construction and preservation of affordable homes while including strategies that remove barriers to accessing safe and healthy homes within our current stock, is a crucial foundational element to impacting the housing crisis.”

More than housing
A recent blog post by the Robert Wood Johnson Foundation featured the work of the Sankofa Initiative by West Elmwood Housing Development Corporation, putting the focus on community-based strategies to build health equity.

“Many housing projects focus exclusively on putting a roof over peoples’ heads. We sought a broader approach that integrates cultural values into kitchens, homes and neighborhoods,” the blog began, written by Sharon Conard-Wells and Angela Ankoma, who received the Foundation’s 2018 Health Equity Award.

The literal definition of “Sankofa” from the Akan tribe in Ghana means “go back and fetch it,” the blog continued. “While the future brings new learning, knowledge from the past must not be forgotten.”

This principle, Ankoma and Conard-Wells wrote, “guided our efforts to transform 10 formerly blighted lots into a vibrant community of 50 modern “green” apartments in Providence, Rhode Island’s diverse West End community. The $13.5 million development is connected to 30,000 square feet of community garden space. Single fathers come with sons, pastors come with children and people sit under the garden’s pergola, which was built by local youth volunteers. It is, as one article put it, a beehive of activity.” [See link below to ConvergenceRI story, “Sankofa World Market helps West End community grow some roots.”].