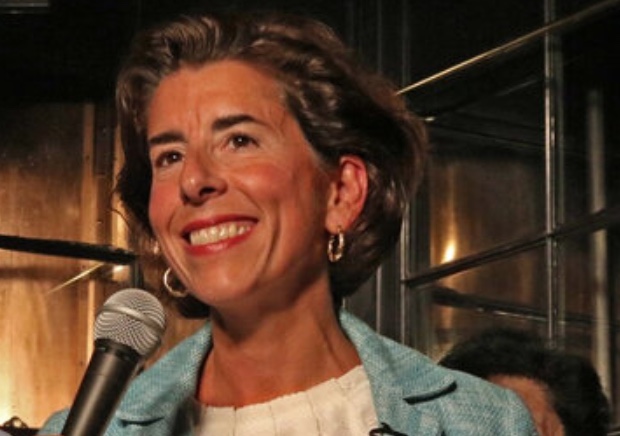 The interview that never happened – by ConvergenceRI

With the Governor on her way to Washington D.C., her refusal to sit down with ConvergenceRI for a one-on-one interview, despite six years of persistent attempts, must be worn as a badge of honor.

I’ve interviewed hundreds if not thousands of people during my journalism career, which has spanned five decades.

From Charles Mingus to Toni Morrison to Robert Bly to Seamus Heany, from Sen. John Glenn to Gov. Jerry Brown to Sen. Paul Simon, from Odetta to Larry Coryell to Steve Miller, from Rambling Jack Elliot to Phil Ochs to Nikki Giovanni.

My work has been published by The New York Times, the Los Angeles Times, the Boston Globe, the Philadelphia Inquirer, the Village Voice, Boston Magazine, Rhode Island Monthly, the Real Paper, the Boston Phoenix, In These Times, the National Law Journal, New Times Magazine, the Providence Business News, and the Berkshire Eagle, among others.

And, I have conducted interviews with elite academic medical researchers, including Dr. Jack Elias, dead of the Brown Medical School; Dr. James Padbury, principal investigator for Translational Research program in Rhode Island and pediatrician in chief and chief of Neonatal/Perinatal Medicine at Women and Infants; and Christopher Moore, associate director of the Robert J. and Nancy D. Carney Institute for Brain Science at Brown University.

10 on a scale of difficulty
I have conducted interviews in dicey situations: with the Saturday Evening Post editor for Norman Rockwell, right before Rockwell’s funeral in Stockbridge; with Waswanapi Chief Peter Gull in the small village of Miquelon, Quebec, talking about mercury pollution; with N.H. Gov. Meldrim Thomson at the 1977 Seabrook, N.H., occupation; and with the Rev. Jesse Jackson, in a ride from Midway Airport to his home, after which I had to call a taxi cab to leave.

For sure, some interviews just didn’t happen:

• In 1982, a scheduled interview with Mass. Senate President William Bulger did not occur; he refused to come out of his Statehouse office. After I sat in the foyer for several hours, his top aide, Francis X. Joyce, finally spoke to me.

• In 1975, an interview with Bruce Springsteen, backstage at a concert in Washington, D.C., did not occur, my way blocked by his band mate, Little Steven [in large part because Little Steven was apparently more interested in my date – and was upset that she was not, ah, “available.”

What a handshake doesn’t mean
And, my attempt to conduct a one-on-one, in-person interview with Gov. Gina Raimondo has never happened, despite numerous, persistent requests, despite her having agreed in person twice, shaking my hand and looking me in the eye when she did so. [It makes me want to sing along with Dr. Hook and the Medicine Show, on “Cover of the Rolling Stone.”]

For sure, I have shouted questions in media scrums after events and at news conferences, for much of the last six years since the Governor was first elected – which she has dutifully answered.

Through four press secretaries – Joy Fox, Mike Raia, Jennifer Bogdan and Josh Block – I have been stonewalled. My calls did not ever seem to get returned; my requests for an interview were never answered. It took five attempts to get Margie O’Brien at R.I. Capitol TV to correctly pronounce my last name, Respect; find out what it means to me.

I know, from feedback coming from inside her administration, that the Governor and team were paying careful attention to what I wrote.

I don’t feel so all alone, because…
I am not alone in the inability to gain access to interview Gov. Raimondo. Both Steve Ahlquist of Uprise RI and Frank Carini, editor of ecoRI News, told me that they have never been granted a one-on-one audience with the Governor, and further, their requests for information and answers to questions were rarely if ever forthcoming from her communications team.

What comes to mind is the image of Anne Gorsuch Burford [the mother of Supreme Court Justice Neil Gorsuch], who, as head of the scandal-ridden U.S. EPA in 1983, announced a new program to evacuate residents of Times Beach, MO, because of dioxin contamination, as anxious families and children that had been excluded from the event had their noses pressed up against the glass windows.

What questions would I ask?
If I were to be granted a 20-minute in-person interview, I would ask the following questions:

• Why did you refuse to do an in-person interview with me for six years? Were you afraid of answering my questions?

• How would you evaluate the successes and failures of the Reinvention of Medicaid program?

• What was the reason why you didn’t respond to the briefing book that outgoing Health Exchange Director Christy Ferguson left for you, which first identified the glitches with UHIP’s implementation?

• In your efforts to change the dynamics around nursing home care in Rhode Island, how important do you think it is to understand the role that hospitals play in pushing patients out of inpatient care, and how would you change that?

• What investments would you recommend that Rhode Island make in its public health infrastructure, given what has been learned as a result of the coronavirus pandemic and the breakdown of the health care system?

• What role has Jon Duffy played as an “informal” advisor to your communications efforts?

• What influenced your efforts around tackling substance use disorders and overdose deaths from opioids?

• Is there a need to better regulated plastics and chemicals in our environment, which have become ubiquitous in our oceans, in our drinking water, and in our own bodies?