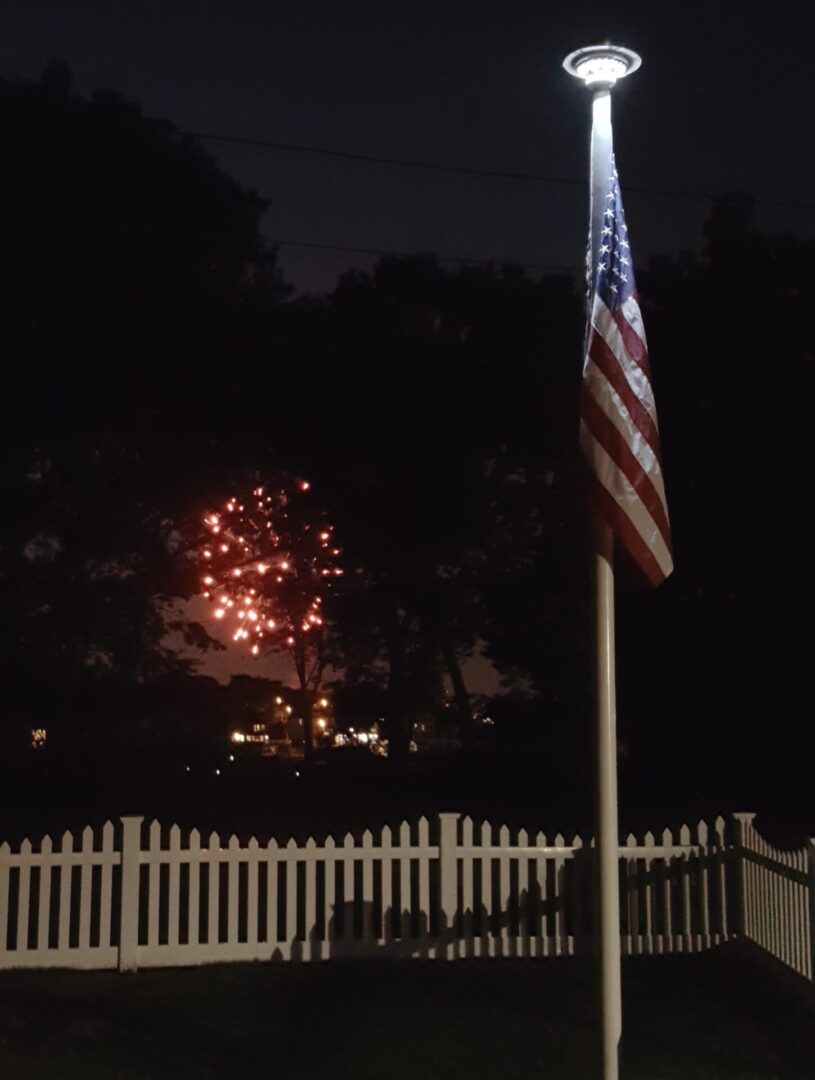 The view from my front door as we celebrate the burning of the Gaspee.

… Everybody in Rhode Island knows that the American Revolution began at Gaspee Point on June 9th, 1772. A British tax collecting schooner ran aground during low tide while chasing a smaller ship, The Hannah; the Captain was apparently not aware that a sandbar from the point extended well into Narragansett Bay, and while stuck in the sand some Revolutionary War era merchants boarded longboats and paddled up the bay from Providence to Warwick, captured the crew and set the schooner on fire.

Mind you, Revolutionary War era merchants were not at all like the merchants of today. Back then, the merchants were often rabble rousers, and tended to be wealthy businessmen and who had the most to lose by engaging in illegal acts against the Crown. Things like their lives, livelihood and sacred honor were at stake.

The men who burned the Gaspee were led by The Sons of Liberty, and a man named John Brown was one of the leaders of the expedition. The owners of the land that I walk when I visit the beach are descendants of the very same man.

I love living in a place with constant reminders of years and events long past. The past fascinates me, and I truly believe that he that does not learn from it is condemned to repeat it. Knowing that a place so rich with historical significance is within walking distance from my home gives me a great excuse to avoid the gym and stay off the treadmill and distractions from the cable TV news that goes with it.

My street leads to a partially hidden gate in a four-foot-high chain link fence. A path behind the gate straddles two properties. In Rhode Island laws exist near the waterfront ensuring the public’s right to access the shore, so there are no worries of trespassing. Somebody used railroad ties and a lot of hard work to make a stairway from the street to the beach, and the thirty-foot descent and concentration and energy needed to safely navigate the steps provides a moment of clear thought and on simple movement, and empties the mind of its incessant chatter, erasing the needs and wants of life in civilization and preparing it for the serenity of the beach.

It was a great place to begin a revolution, and it is just as great a place to bring a dog. Very seldom is the beach occupied, and when it is the half-mile expanse offers plenty of room to roam for the few people who dot the shoreline, most of whom are people walking their dogs.

It is one of the few remaining places in my town where a person can let their dogs run free, and when off the leash Zimba and Lakota would do just that, straddling the water line and running away at breakneck speed, then turning around and running back to me. Of course, there would often be a foray into the tick infested tall grass as well, but little in life comes without a price, even when you are a dog, and pulling the occasional tick from their dense fur a small price to pay for the joy I felt watching them run unfettered by me.

One of my favorite things to do while at the beach with the dogs was to envision the Schooner Gaspee stuck some fifty yards offshore, close enough for me to hit with a rock, if it were still there, and picture the men from 1772 rowing toward it with an American Revolution ahead of them. They had no idea what the future would bring, or if their names and acts that night would be forever entwined in the history books, integral parts of a decade that set the course of history toward freedom, prosperity, and the pursuit of happiness, or if they would even survive the night.

I normally don’t believe in spooks, but with so much history on the horizon, and the tides coming and going the same as they did in 1772, it’s hard to not believe. There is something haunting about a lonely beach, and after we had to put Zimba and Lakota down, I would walk alone through the quiet neighborhood, and take the steps from civilization down to the shore and be left alone with my thoughts.

The writer is the author of “Mr. Wilson Makes It Home” – available at Amazon, here: https://www.amazon.com/Mr-Wilson-Makes-Home-Happiness/dp/1629145734