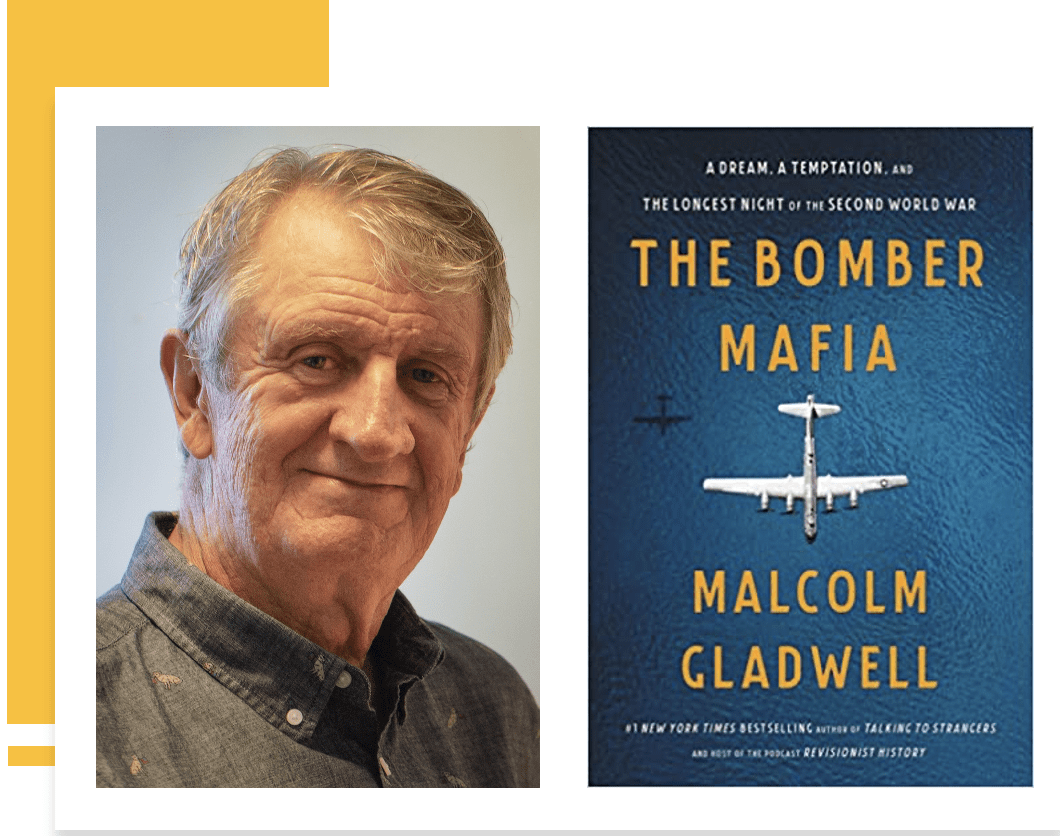 The Bomber Mafia – a book review by Jim Raftus

At what cost in human lives, if any, does a military campaign lose its moral underpinning?

What is the best method for ending a conflict?

These two questions, one of the heart, the other of the mind, provide the crux for Malcolm Gladwell’s newest nonfiction work, The Bomber Mafia. Gladwell’s chronicling begins in the late 1920’s when a nondescript engineer, Carl D. Norden, began working on a revolutionary bomb sighting mechanism. The author carries the story forward to August of 1945 when Japan surrenders ending World War II.

As Hitler’s troops rolled through Europe, toppling rivals like bowling pins, America watched warily. The sheer brutality of the first World War, where 37 million people were killed or wounded in mostly gruesome land battle was front of mind to many. Paradoxically, included in those shocked by the carnage was a group of young military pilots from the fledgling Army Air Corp, precursor to the Air Force. These men also marveled at the rapid advancements in the aerodynamics and capabilities of the new planes they were training in during the late 1930’s. Compared to the rickety, held together by cables, wooden planes used in the first war their aircrafts were considered miraculous.

These cocky airmen believed the faster speeds, greater agility, longer flight efficacy and larger weapon capacity of their new planes could alter the course of future wars. Training at the newly established Air Corps Tactical School at Maxwell Field in Alabama these enthusiastic flyers became known as “The Bombing Mafia”.

Gladwell deftly explains how their radical, self-actualized, solution to defeating an enemy via airpower went against all the prevailing doctrines. They bragged that with the new Norden bombsight they could “drop the bomb into a pickle jar from 30,000 feet.” Therefore, rather than following the indiscriminate carpet bombing, destroy everything, mode then being employed by both the Axis and Allied forces in Europe, the Bomber Mafia advocated for precise targeting of military/industrial targets in Germany. This divide between strategic versus blanket bombing created moral as well as tactical conundrums for their advocates.

Gladwell’s narration is sprinkled with some startling and some disturbing facts.

The first napalm test bomb was exploded on the Harvard soccer pitch in Cambridge, Massachusetts on, ironically, July 4th, 1942. Napalm would become the horrific weapon of choice for the blanket bombing advocates led by Major General Curtis E. LeMay.

LeMay replaced Brigadier General Haywood Hansell as leader of the 21st Bomber Command Group in January of 1945. Hansell had been utilizing the Bomber Mafia’s targeted bombing tactic with only minimal success. Under LeMay’s control the strategy shifted and the 21st Group conducted napalm bombing of 67 Japanese cities.
Gladwell provides insightful, compelling descriptions of the very different psyches of LeMay and Hansell and the impact these differences made on the direction and course of the war effort. Gladwell is a master at probing the human condition.

When Japan surrendered after the special 509 Composite Air Group dropped the first the world’s first atomic bombs on Hiroshima and Nagasaki in August,1945 most observers felt the bombs had brought the Japanese to the peace table. LeMay claimed those attacks were “superfluous” and credited his napalm blitz with forcing the enemy to surrender.

Gladwell also describes the amazingly different routes taken by the nuclear and napalm campaigns. The decision to drop the atomic bombs Gladwell writes, “… was endlessly debated and agonized at the highest level.” He describes President Truman wandering the halls of the White House unable to sleep.

By contrast, Lemay’s prolonged napalm bombing, which killed more people than the nuclear bombs, seemed to have been done by LeMay at his own discretion. Such are the vagaries of war.

These two admittedly horrific campaigns against Japan did eliminate the need for two pending American actions, a Naval blockade and a U.S. troop invasion called Operation Downfall. Estimates of potential American casualties were more than half a million soldiers. Japan would have suffered even higher casualties.

The Bomber Mafia showcases Gladwell’s renowned talent of finding seemingly disparate events and somehow weaving them into a captivating narrative. Unlike his past best sellers, The Tipping Point and Blink, The Bomber Mafia is infused with raw humanity and the horrible losses and heroic gains which depend on the whim of a few powerful people.