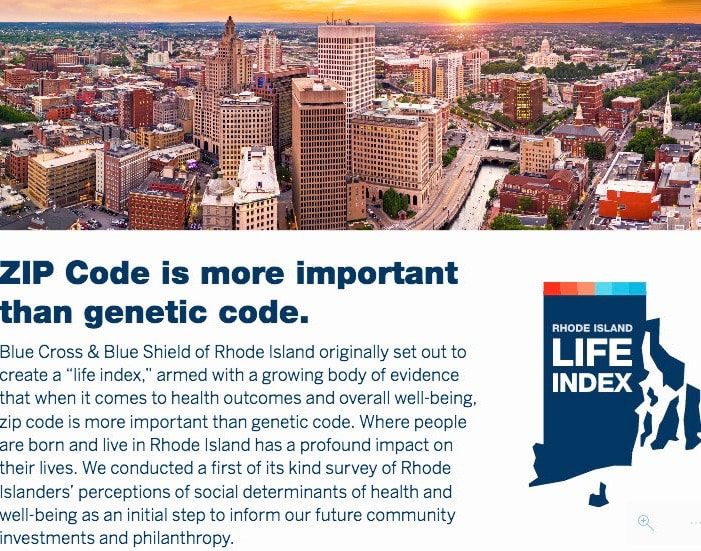 A new survey, the Rhode Island Life Index, creates a qualitative survey measuring how Rhode Islanders perceive the social disparities of health in their communities

There is much to recommend in the findings from the first Rhode Island Life Index, conducted as a partnership between Blue Cross and Blue Shield of Rhode Island and the Brown University School of Public Health, which sought to capture and measure the “perceptions” by Rhode Island residents about their own communities’ health and well-being.

The Index, which was based on surveys of 2,209 Rhode Island residents in April and May, created yet another dataset, reaffirming and reinforcing the importance of the need to address the social determinants of health in a comprehensive fashion in future health policy.

Translated, the concept of health equity has entered the vernacular around future health policy, confirmed by the Rhode Island Health Index.

As Kim Keck, president and CEO of Blue Cross and Blue Shield of Rhode Island put it, in introducing the findings at the public release of the Index, held on Wednesday morning, Oct. 23, on the fourth floor of South Street Landing, “Zip code is more important than genetic code” in determining health outcomes.

The need for affordable housing
As described in the Index, the surveys attempted to capture a summary of how residents rated the social and economic aspects of their own community, including questions about access to transportation, health care, employment, food, and housing.

What rose to the top [or actually the bottom] of the findings, based upon the results of the 15-minute survey, with 902 conducted by landline, 900 by cell phone, and 407 through a web survey tool, with responses segmented by income – respondents who earned more or less than $50,000 a year; age – respondents who were under age 55 or older than 55, with a built-in over-sampling of older adults; and location – whether respondents lived in the four “core” cities of Rhode Island, Providence, Pawtucket, Central Falls and Woonsocket [defined by having 25 percent of the population which lived below the poverty level], or not, was housing.

[For the record, the calls were conducted by  the Siena College Research Institute, employing 124 of their most experienced interviewers, utilizing 46 computer assisted interview stations.]

Coupled with the release of 2019 Housing Fact Book by HousingWorks RI Works, which quantified the dire need for safe, healthy, affordable housing in Rhode Island, the Index and the Housing Fact Book, taken together, served as a one-two punch that identified housing as a critical need, tying it to health outcomes. [Whether or not the news media were able to grasp the interconnected nature of health outcomes and housing is open to question.]

A first step in a continuing saga
Melissa Clark, Ph.D., the principal investigator of the project, readily talked about what she saw as the potential places in room for improvement in the next iteration of the survey. They included: the need to consider conducting an over-sample for racial and ethnic minorities; the need to ask questions about insurance coverage, whether the respondents were uninsured, had commercial insurance, Medicare or Medicaid; and the need to ask more questions about access to behavioral health care treatment.

The most important takeaway for Clark was the imperative to use the data. “Use the data,” Clark said. “Don’t just talk about the data. Do something about it.”

Panel discussion highlights
As part of the pubic release event on Oct. 23, Clark was joined by four others on a panel discussion to discuss the findings, with Dr. Matt Collins, the chief medical officer at Blue Cross and Blue Shield of Rhode Island, serving as moderator.

Matthew Johnson, the executive director of the Howard R. Swearer Center for Public Service at Brown University, questioned the low number regarding responses to questions about the opioid epidemic, saying that the question asked about actual experiences, as differentiated from a questions about perception. And, when asked that way, the responses would be mitigated by stigma, he said.

Carrie Bridges Feliz from Lifespan also questioned the way that the opioid question was worded, which asked: “Have you, an immediate family member, extended family member, or friend, abused opioids?” The results from the community health needs assessment conducted by the Lifespan health system, as well as in follow-up focus groups, identified that simply asking about “opioids” missed the reality that there were other sources of substance abuse, including alcohol and cocaine, that needed to be addressed.

Dr. Ada Amobi, the director of the Health Equity Institute at the R.I. Department of Health, questioned the relative high positive numbers around the perceptions of access to food, saying that every health equity zone in Rhode Island, as part of their community needs assessment, had identified food insecurity as a major problem.

Angela Ankoma, executive vice president at United Way of Rhode Island, felt there was a need to ask different questions about the problems of social isolation, as reflected in the kinds of calls received by United Way as part of its 2-1-1 program. Ankoma also thought that there needed to be better questions around economic insecurity as part of the questionnaire.

[Given that the initial survey did not over-sample for ethnic and minority populations, and the question regarding discrimination in the past 12 months, which asked: “How often have you been concerned about treated unfairly in a health care setting because of your race, ethnicity or some other personal characteristics?” received only a total of 7 percent saying respondents had experienced discrimination, it did occur to ConvergenceRI that the make-up of the panel, which include three women of color, appeared to overcompensate for the gap in the survey.]

For a link to the story, with sidebar commentary, in ConvergenceRI, go to: