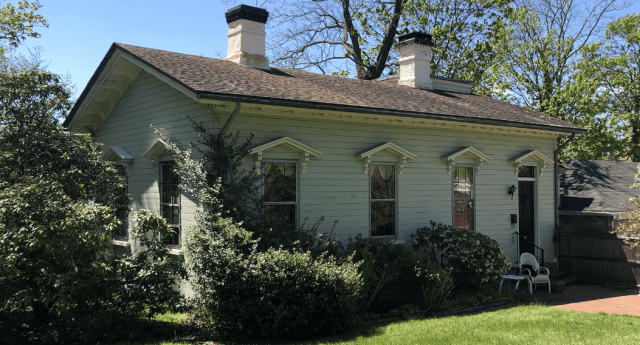 Last night’s special meeting of the Providence Historic District Commission to consider the dear little cottage at 59 Williams St., off Benefit, shows that the city’s process for development projects can work.

Last year, a developer proposed moving the 19th century Italianate cottage closer to Williams Street to enable two or three townhouses to be built behind it, facing John Street, threatening a longstanding wooded area. Residents of the historic neighborhood on College Hill opposed moving the cottage. The commission urged the developer not to move it. It will not be moved. That was the first victory of the neighbors, led by resident Lily Bogosian.

Gone was almost every modernist touch. On the addition, the slant roof gave way to a gabled roof. The single-pane windows gave way to four-over-four windows similar to the cottage’s six-over-six. The addition’s vertical-slat siding gave way to horizontal clapboards similar to those of the cottage. The massing seemed less suburban and more in line with how house owners historically added to their domiciles bit by bit over time. The major changes can be summed up in few words, but their visual impact was compelling.

The switch must have been difficult for St. Florian. While he made his reputation and fortune* with traditional designs for the Providence Place mall and the National World War II Memorial (in Washington), he started his career as an academic modernist at RISD with mostly unbuilt abstractions in his portfolio. Since scoring big with his popular downtown shopping mall and his national memorial, he has done some modest local work, mostly modernist in style.

Why did he reverse course on the cottage addition? The pushback from both the neighborhood and the commission was not clear or strong. The neighbors were hesitant to challenge the celebrated St. Florian and reluctant to demand that the addition fit into its setting. Some neighbors were not necessarily uncomfortable with a modernist style, others were worried more about saving the woods; they seemed unaware that introducing ugliness would tend to undermine their own property values and degrade the charm of the woods – which were slated to be eliminated anyway to make way for the townhouses at a later date.

Some members of the commission may have had similar views, but as a body the HDC seemed content to kick the can down the road with minor objections.

Given the lack of clarity in the stance of both the neighbors and the commission, why did St. Florian not keep ramping up his modernism until the commission cried uncle? I would like to think he had a “road to Damascus” moment, but the developer probably was growing tired of the expense. “I’ve never had to go to five commission hearings” for one project, St. Florian exclaimed. The commission gave the project final conceptual approval, pending a subcommittee pondering members’ concern for certain important details.

Commission chairman Michael Marino mouthed a conventional modernist piety, saying “I don’t want the addition to have a fake sense of history.” Then what is this exercise all about? Preservationists should emphasize continuity, not contrast, because continuity respects the original architect’s work and preserves the setting in which it stands. Which is what preservation is all about.

The extent of the changes that return the project to continuity from its recent perilous approach to contrast can be seen in the two drawings atop this post. As preservationists, the commission has done its job. But the neighborhood should not rest on its laurels. The townhouses proposed by the developer are still early in the permitting process, but under St. Florian they have gone through the same increasingly discordant versions. Let the commission and the neighbors gird their loins for more good work. Let them be inspired by the photograph, above.

To read the complete story with comments: https://architecturehereandthere.com/2021/03/09/st-florian-sees-light-on-cottage/