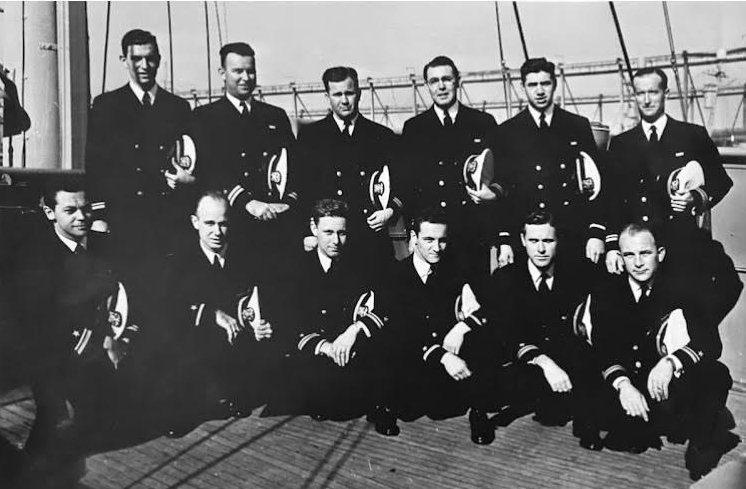 Sharing our stories: The courage within, with Peter Simon – Richard Asinof

Photo: The crew of the USS Zircon. Stanley Simon, an orthopedic surgeon, is pictured at stage right, the person farthest left to the viewer, in the second row.

Editor’s Note: The brutal scenes from the war zone in Ukraine shown on TV and across social media platforms have triggered memories and emotions for many, as we have all become witness to the bravery of those in combat.

For men and women of a certain age, the memories recalled are the choices that were made by their parents to fight the Nazi menace of Hitler – particularly if they were Jewish.

For others, whose family members served during the Korean and Vietnam wars, the memories are more conflicted – there was a draft in those days. For many veterans who saw combat, there was only a reticence not to talk about their experiences, to be stoic, rather than share the emotions they felt.

After President Nixon ended the draft [in part to seek to quell the anti-war movement], service in the U. S. Armed Forces transitioned to a volunteer force.

However, wars and conflicts did not make those distinctions when it is your land and way of life that you are defending.

Perhaps the most important takeaway is the value in sharing such stories – with friends, with families, with colleagues. Here is one such short story.

WELLFLEET, Mass. – I have been thinking a lot about what it takes to go to war. I know that someone my age might only face that kind of decision if there were a war coming to us here in U.S.

Seeing images of white nationalists, Neo-Nazis and other bands of angry people has often triggered those kinds of memories and feelings for me. But now, with the invasion of Ukraine by Russia, I am starting to remember the stories my Dad told me about his decision to join the Navy and spend four years of his life fighting Hitler and his fascist military forces in the European Theater during World War II.

My dad, Stanley Simon, an orthopedic surgeon who died in 1993, used to tell us that he joined the Medical Corps after completing one year of hospital training, known as a rotating internship. He knew he wanted more training in orthopedic surgery, but decided to put that on the back burner to fight Hitler. He used to joke that he had joined so that he could get a new winter coat.

I remember him describing sea duty as a General Medical Officer as part of convoys between New York City and Guantanamo Naval Base in Cuba.

Then, a period on a Marine Air Base at Cherry Point, N.C.. He was a newlywed at that point, and I remember my mother telling stories about living in officer’s housing, having access to the PX – and getting the support from others on the base.

She told me that she had loved her time as an officer’s wife, and that it was my Dad who could not see prolonging his military career at the end of the war.

The winds of war
The story that I remember the most was when he shipped out on the USS Zircon, a 173-foot yacht refitted as a weather ship and sent to the North Atlantic to report on the conditions in preparation for the invasion of Normandy.

He served as the ship’s doctor: he was also responsible for crew morale, by order of the ship’s Executive Office, Peter Campbell, who hailed from Kokomo, Ind., after whom I was named.

My dad had lots of stories about bringing films on board with actresses popular with men in those years – and a lobster bake he arranged for the crew on leaving Newfoundland.

Under watchful eyes
He did mention that when the ship arrived in the area they were to patrol, they were clearly being observed by German U-boats, which were constantly monitoring their radio transmissions, trying unsuccessfully to break the code being used. He mentioned that everyone on board realized that if that code were broken, they would be sunk immediately.

That kind of courage is visible today in the reports by journalists in Ukraine as well as the citizens who have remained behind to fight against Putin’s soldiers. I don’t think anyone really knows whether they possess that kind of courage until life puts you in the kind of position they are being exposed to now.

To read the full article: http://newsletter.convergenceri.com/stories/an-antidote-to-despair,7096