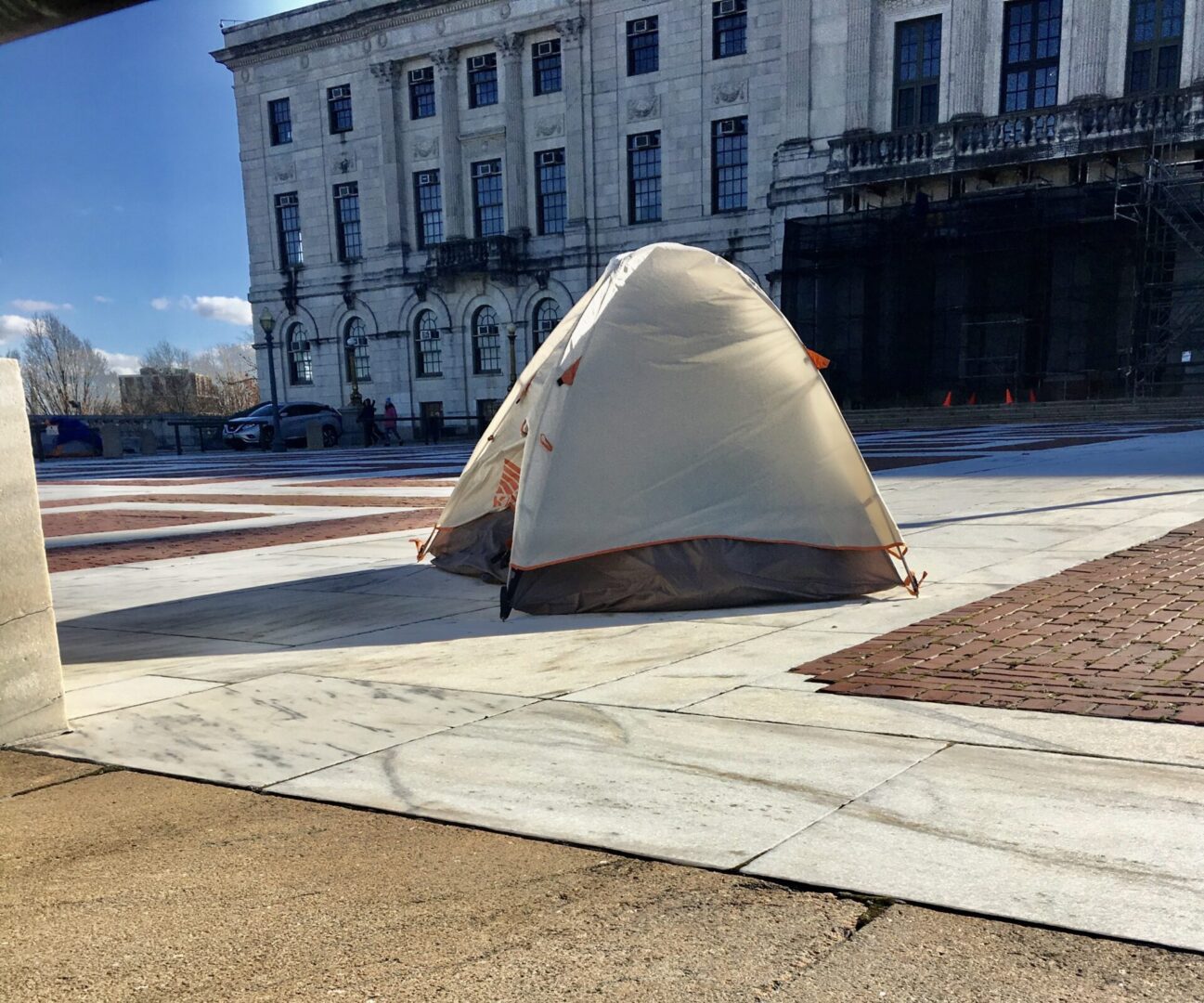 The temperature this morning is 37 degrees. Tents line the sides and courtyard of the Smith Street entrance to the RI State House. “Hundreds” of others slept outside last night in Rhode Island. Did they need to? Some say no, help has been offered. Others say that’s not true, no one has offered anything.

In one case a temporary shelter location stands at the ready, offering its shelter from the cold, but state officials haven’t responded to the offer to mobilize it. Then there’s an empty hospital, seemingly being prepared.

During active campaign season, Governor Dan McKee promised that anyone wanting shelter would have it before Thanksgiving. T-minus 1 and 40+ people are encamped at the RI State House. Total in need around Rhode Island has estimates varying from 150 to 500 to as many as 1,000.

We look at recent developments.

In our article of November 18th, Homeless at the RI State House, a statement was provided by the RI Office of Housing and Community Development, Josh Saal, Secretary of Housing that said:

“…outreach workers regularly meet with individuals encamped at the State House to make them aware of support services and shelter options and to facilitate their movement to available beds. Anyone who is continuing to encamp at this location has declined opportunities to move to alternative shelter resources.”

In an article by UpriseRI, this statement was disputed as writers talked with 8 people outside the State House who said no one had offered them shelter. Saal, responding to the discrepancy said, [The statement] was, at a minimum, inartfully phrased, to put it lightly, and does not reflect the situation that’s very real and very case-by-case with anyone who is camping out. – It’s much more complex than ‘accepted’ or ‘declined,’ and I don’t think that [it] was accurate to say they have ‘declined,’” Saal added. “The situation is that we contract street outreach workers, and that’s mostly House of Hope and Crossroads who have been going there three times a week or so, at a minimum. Some people engage [with outreach workers], some people don’t.”

Yesterday at the RI State House, several advocates who were in the building to do business for their organizations were met with people shouting “Shame, shame, shame!” at them, personally. Startled, one of the individuals who spoke with us said, “I used to be so sympathetic, but to see this behavior and screaming at the RI State House, and at people who could be here for any reason, well, it’s not the way to go about getting change. A tall man with a beard has riled these people up to a frenzy, like a Pied Piper. It was very sad to see. People have issues beyond poverty or lack of housing, that is very obvious. Who is helping them? It’s complex. It is so cold today. And tonight? I can’t imagine people sleeping outside. This is the United States of America.”

Last night at the RI State House in a Boston Globe report:

State House advocates want hotel rooms opened up as an emergency measure. Previously, Gov. McKee said hotel room use similar to last year’s use of the NYLO hotel would not be happening this year.

In South County, they are using hotel rooms, in small numbers per hotel to house the homeless, particularly families. They have also said living in cars is commonplace, but as the weather gets even colder, that model will not work for the whole winter. Big box store management and local law enforcement from stores like Walmart are turning away from enforcing a no-park regulation at night, due to the crisis situation.

“Street outreach teams have visited the encampments at the State House approximately three times a week for the past 6-8 weeks. According to outreach staff who have engaged directly with this population, offering shelter resources, which entails contacting the Coordinated Entry System on someone’s behalf, is a priority in their efforts.

When individuals do engage with outreach teams, they are offered these resources; to say otherwise is not accurate. Street outreach teams also work to provide other services such as immediate medical needs from clinicians that join the outreach teams, immediate food needs and immediately clothing needs.

Homelessness is a year-round issue, but is particularly critical in the winter months. We are working in collaboration with our provider partners and municipal leaders across the state to invest in infrastructure, services and supports that will help ensure unhoused individuals and families are able to access the resources they need to find safe, warm places to sleep at night.

Our goal is to prevent homelessness, and – when it can’t be prevented – ensure it is rare, brief and nonrecurring.

Just this year, we have released funding to create 274 new shelter beds in Rhode Island. In the coming days, we are expecting to release funding to create additional beds that will bring the total number of new beds funded in 2022 to nearly 380, which is in line with the goal set in the attached Homelessness Crisis Plan.

With these additional beds, we expect our statewide shelter capacity to include more than 1,000 available beds.

In addition to expanding shelter capacity, we are investing in programs and initiatives that aim to address the root causes of homelessness. For example, we recently released a $9.5 million RFP to expand legal and housing stability services for individuals and households who are homeless or at risk of becoming homeless.

We remain in constant communication with homelessness service providers and municipal leaders across the state to activate our street outreach and engage individuals at risk of experiencing homelessness to inform them of available services and supports.”

Pawtucket building stands at the ready

We followed up with Paula McFarland, Executive Director of the Pawtucket Housing Authority when we learned an idea from last year, the location of Pallet Shelters inside a large warehouse-type building had been nixxed by the Fire Department, but the building had been purchased to move forward – leaving Pawtucket with holding on to an empty building at 1139 Main Street, close to the border with Providence, and on a bus line and within walking distance of many restaurants and stores.

McFarland’s email to us: “Thank you for following up regarding an update on the 1139 Main Street building. The Pawtucket Housing Authority has continued working alongside the City of Pawtucket as we try to provide adequate options for the State to address our homeless population here in the city. As the weather continues to drop, this becomes more and more urgent.

Most recently, the 1139 Main Street shelter option was denied by the State, but we continue to believe it is the best option. The City has also offered a potential privately-owned location to once again revisit the “tiny houses” model. We continue to have ongoing conversations with Secretary of Housing Josh Saal and his team and are awaiting their direction.

The PHA has become more involved over the past couple of years, but understands that this has been an ongoing issue since 2016. The PHA continues to support homeless families and individuals through federal funding to address permanent housing options in the City; however, funding is limited. We hope to continue to be an asset alongside the City in helping the State to address the homeless issue.”

Two floors of the empty Memorial Hospital of Rhode Island are being worked on, according to Eileen Hayes of Amos House, to turn into shelter for those in need this winter. A week ago, Hayes said they were waiting for physical work to be done, “the building to be sealed”, so they could open this shelter. Requests for an update yesterday have not yet been answered by Hayes.

We were told by an intake worker at a homeless service agency that there are 20 pallet shelters ready to go, sitting in a warehouse. Directors of that program have denied that this is true. We have seen 1 shelter being taken around for demonstration purposes by House of Hope.

Those shelters are estimated to cost $8,500 each. They need leveled land. And electricity. And heat. And bathroom and shower facilities. They do not seem to be an answer – this year. An idea to move dozens of them to Cranston has met with opposition as Cranston already has an overflow of 150 at Harrington Hall and problems in the community that seem to be growing.

Deadlines loom – Gov. McKee said anyone wanting shelter would be provided one by Thanksgiving. It’s also been said that December 1st is the deadline for all tents to be out of the RI State House property. The clock is ticking.

Housing options may not be ideal – they may be a bed in an empty building in Pawtucket, or in a repurposed hospital. Permanent solutions won’t be found – today.

It is 37 degrees, with a high of 44 expected today. The sun will be shining. For more of us the weather is described as an “A” day. Rain is forecast for Friday – and Sunday.