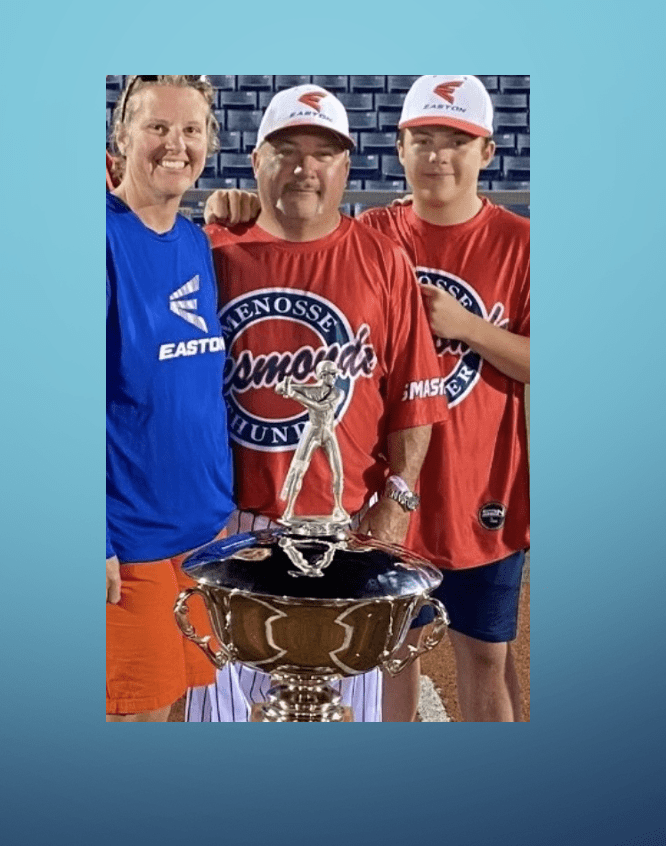 Photo:  Donna, Scott “Stump” and Easton with the Championship trophy.

As for many future softball players, it began for Scott “Stump” Sunderland when he and his friends went down to Dow Field in Hope Valley to watch the men’s adult teams play during the week, from early spring to late fall. Teams named We Three, Woodmansee Insurance,  BDA, Kenny’s Bus, and Mary’s Restaurant. “These were the teams that we wanted to play for when we got older. They were the best of the best in the area,” Sunderland said. Little did he know at the time that his teams would rise above them all and go on to play on a much bigger and brighter stage.

For anyone, the climb to the top had to start at the bottom and the first step of the journey was made in 1983 when “Stump” as he was known to his friends, played on his first men’s teams in 1983, under the name of Papi’s Boys. Two years later his team became the Chariho Merchants, and then in 1987 he would join forces with Jim Thompson from the Thompson Lumber team cosponsoring with his own company, S & S Landscaping. Thirty-five years later both Scott “Stump” Sunderland and S & S Landscaping are still very much involved on the softball scene, but nowadays the team plays on the national softball stage as they compete and win in national and world tournaments. Long gone are games being played at Dow field in Hope Valley, now they play in the country’s biggest softball complexes against the best the country has to offer.

But from 1990 to 2006 Sunderland’s S & S Landscaping teams was a constant force on the Rhode Island and New England softball landscape. Playing in all the affiliations that were offered at the time, the ASA (Armature Softball Association), the USSSA (United States Slow Pitch Softball Association) and the NSA (National Softball Association). Sunderland’s teams went to play and place in the top 10 in several ASA and NSA National Championship tournaments and finished as far as 5th place in the ASAs as his teams competed on the “B” level. “There were no “A” level programs for the local teams to compete in, and class “B” was the highest we could go and play at the time. Talent in the area was good but in order to compete on a national level you needed to expand the talent pool.” It was at this time he decided to step back from the men’s program and re-evaluate the situation and where he wanted to be in the men’s program going further.

Although he was taking time away from the men’s program, Sunderland was very much involved in softball. In fact, he was involved in sponsoring and playing on a Co-ed team in Westerly, Rhode Island, and then in 2008 he began getting involved in both sponsoring and coaching a women’s team called, naturally, S & S Landscaping. In fact, two years earlier, he met his future wife, Donna, who played softball as well, and in 2018 was inducted into the Rhode Island Slow Pitch Softball Hall of Fame. The S & S Landscaping Women’s team expanded from 2008 to 2019 winning several local and regional tournaments. He points to 2015 as the best season the team had when the team came in 3rd Place in the USSSA “D” World Championship tournament. However, it was in the famous tournament in Canada called the LePiff where his team was playing another regional team called “Twisted Sista” in the qualifying round.

“Christine Dowling was all everything on that team. We had already qualified for the championship round, and they had as well, but we had to play each other to complete the round. Every time she came up to bat, we pitched to her. The situation didn’t matter, how many people on base didn’t matter, we pitched to her. Every time she hit a home run, each farther and majestic than the one before. We got beat by something like 20 runs. But when we faced off for the tournament finals, we walked her every time she came to the plate. It didn’t matter if she was leading off or if the bases were loaded and we walked in a run, she was not going to be allowed to take a swing in the game. We ended up winning the game and the tournament by something like 20 runs. She was the straw that stirred the drink, without her contribution to the offense the rest of the team couldn’t step up and fill the void and we won the tournament.” He goes on to say that “Christine, myself, and my wife became very good friends and I miss her tremendously. She passed away a few years ago. I stopped sponsoring women’s teams after the 2015 season and turned my focus to the men’s program.”

Sunderland decided to go “all in” and get to the highest level of softball that he could. So along with Paul Viera, USSSA Director John Hickey and Kirby Murphy put together the Magic Softball-S & S Landscaping-Easton team. They entered the Conference that was affiliated with the USSSA. It was here that the team made regular appearances to the World Championship tournament. In 2015 Sunderland made the next step when his S & S Landscape hooked up with Jean Shoppe and Louisville Slugger. In 2016 the Backman-S & S Landscaping- Louisville Slugger team emerged and stayed together for two seasons.

Sunderland explains “there are many moving parts at the top level, getting to the very top takes a lot of commitment of sponsors, players and coaches. Sponsorships often get well into the $100,000 range and the players have to commit to a schedule where they have very little time for themselves during the summer. It takes its toll on those who don’t go all in. This is one of the reasons the sponsorship group changes at this level so often; the commitment must come from them as well and it helps if a bat sponsor joins in as well. In 2018 to the end of 2019 Sunderland hooked up with Tony Albbacco and Smash it Sports. In 2020 Sunderland hooked up with Brett Helmer and joined Resmondo, Menosse-S & S, RDD, All American restoration & Easton. It was when he made it to the USSSA Major World Series Champion and won back to back major Championships in 2020 and 2021. It was also during this era that Sunderland and S & S Landscaping was part of 3 Top 3 finishes in the World USSSA Championship tournaments. He has won 2 AA Championships and 4 ASA Major Championships with Helmer and his group.

Scott was elected to the Rhode Island Slow Pitch Softball Hall of Fame in 2021 and has no intention to leave the game anytime soon. Running the full gambit of spectator to player to coach and sponsor in the men’s, women’s and co-ed programs and has even umpired along the way. “I have been in the game for 40 years; why would I leave it now? I love softball, my wife loves softball, and my son Easton (yes, we named him after the equipment company that we support 110%) loves being around the game – it’s truly a family affair. There’s still a lot more I feel that I want to achieve so I don’t see myself retiring from softball in the foreseeable future.” He goes on to say, “I don’t see me retiring at all, I just love the game too much!