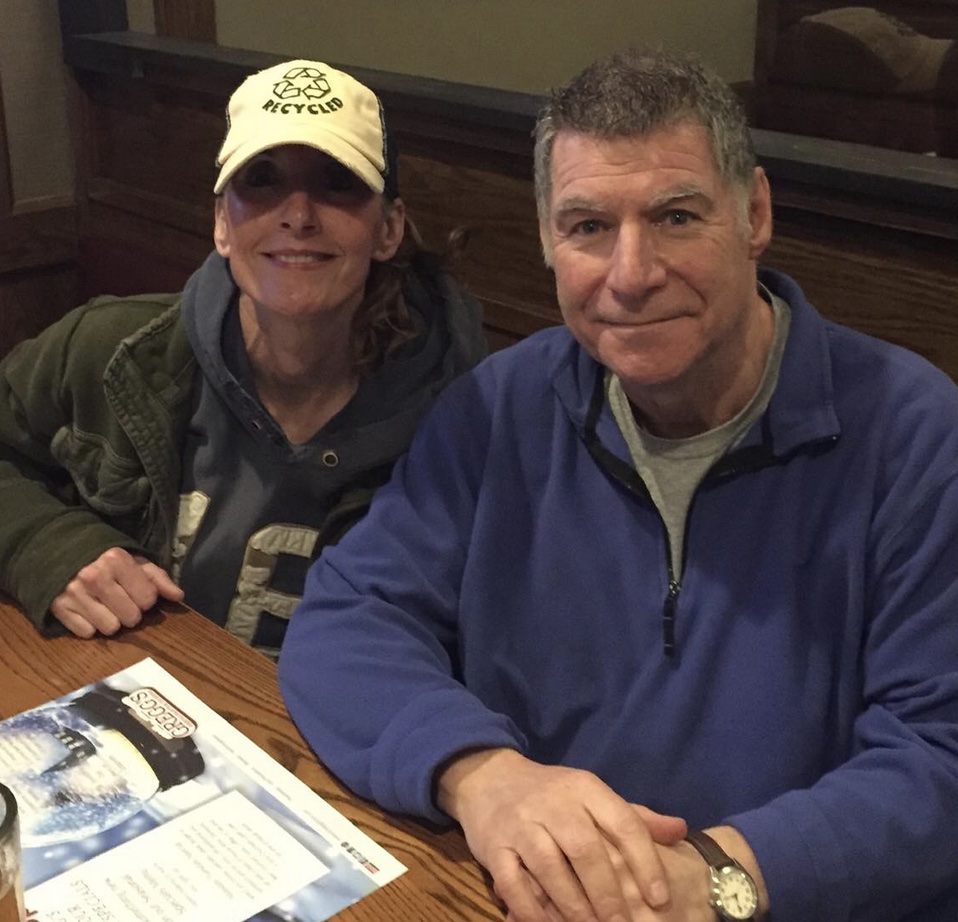 One might say his career has come full circle from its early beginnings on a small radio station in Woonsocket, to programming and performing on air at popular Rhode Island radio stations, to serving as a sports anchor on television, as well. A familiar morning voice to many listeners, this ‘seasoned pro’ was heard on the local airwaves for years in various capacities – but this past December that sound went silent. But a new venture is about to launch to bring Ron’s voice – and that of Jen Brien – back to his listeners.

The new podcast will be called “Ron and Jen’s Great Escape”, and it is set to launch on Monday, May 3rd. You can listen live on Facebook and wherever you get your podcast.

Reflecting on his time in the past “pandemic” year, St Pierre reflects on how he had to move his radio show on WHJJ into his home, affectionately called “Chez St. Pierre”, with his yellow lab, Hazel, nearby. He would share the daily news and local happenings oftentimes flavored with some Rhode Island humor or memories, which made his style unique and comforting, subtly (or sometimes not so subtly), reminding us of days gone by. But on December 31, 2020, St. Pierre’s radio contract ended, and i-Heart Broadcasting chose not to renew.

After decades spent in the radio and television business, this seasoned pro knew this was an all-too-familiar story in the field. He used the time to think about his next steps and new mountains to climb, and set his sight on hosting a podcast. St. Pierre understood that with time being a valuable commodity and people becoming busier, podcasts are becoming extremely popular. Audio content, like radio, allowed the listener to multitask.

Brandastic, a media marketing company, estimates that since 2005, more than 700,000 podcasts have been created, with over 30 million episodes of content – most of them for free. They say about 24 percent of the U.S. population has listened to a podcast, with over 155 million people listening to a podcast every week.

St. Pierre says about the impact of podcasts,  “AdAge.com says that podcasts are able to engage listeners in a way that traditional media can’t. When podcasters speak in a listener’s ear, it feels as if they’re being spoken to more directly,” he said.

St. Pierre will host the newly created podcast with Woonsocket native and longtime good friend Jen Brien, who has co-hosted shows with him on both WPRO and WHJJ. Brien brings years of talk show hosting to the new podcast. She has hosted talk shows on WRKO and WBZ in Boston and Cape Cod’s WXTK.

“Our goal is to provide an escape from the negativity that can overtake conversation about the day’s hot topics…an escape from the banal repetition all too often associated with talk radio. Our goal is a positive approach to news and lifestyle topics with an infusion of humor across the board,” says St. Pierre.

Hosting a podcast will give St. Pierre greater flexibility with his time and give him more freedom and creativity, he says, noting that “Podcasters are by far, the most loyal and engaged audience of any medium out there.”

Over Four Decades of Achievements for St. Pierre

After 43 years in the radio business, St. Pierre, who grew up in the Darlington area of Pawtucket has been a longtime fixture in the Rhode Island broadcast community.

One of his proudest professional achievements was being inducted into the Rhode Island Radio and Television Hall of Fame in 2010.

Radio started early for St. Pierre, beginning while a student at Rhode Island College, where he learned the ropes of TV production as a weekend cameraman for WJAR TV10 in Providence. In 1977, he began his radio career at WNRI in Woonsocket. His first major position was as Program Director for 920 WHJJ AM from 1982 to 1988, now known as NewsRadio 920. He was also part of The WHJJ Morning Show at that time, eventually serving as Program Director for both 920 WHJJ AM and its sister station, 94 HJY FM during the last year of this tenure.

During his time at WHJJ, St Pierre literally helped revolutionize talk radio in Rhode Island in terms of listenership and ratings. He recruited then-Mayor Vincent “Buddy” Cianci for his first stint as a talk-show host at this time, while working with other local radio stalwarts such as Sherm Strickhouser and Steve Kass. His unassuming, authentic style and natural quick wit were enjoyed daily by tens of thousands of radio listeners in Rhode Island and neighboring Southeastern New England.

In 1988, Cap Cities-ABC hired St. Pierre to “flip” 630 WPRO from a music station to a Newstalk format and take on WHJJ. WPRO passed WHJJ in the Newstalk radio war in less than a year. St. Pierre eventually rose from Program Director to President and General Manager.

In his “spare” time, St. Pierre served as a weekend sports anchor for WPRI TV-12. During the early and mid-1990s, he managed several stations in Providence, before taking a series of management positions in West Palm Beach and the legendary WABC in New York City. He returned to Rhode Island radio in 1997.

He had a highly successful on-air and program-management tenure at WPRO 630 AM, enabling the station to rise to the apex of listenership and ratings in our state’s highly competitive radio market. The station’s hosts at that time included the legendary Salty Brine, along with the return of Buddy Cianci to the airwaves — with whom he co-hosted a highly successful afternoon drive-time show.

Anyone who knew St. Pierre during the days he attended Pawtucket-based Saint Raphael Academy were sure he would end up in the broadcasting business. With his personality, wit and intelligence, his peers believed he would most likely end up in front of a microphone.

“In his high school yearbook profile, at St. Raphael Academy in 1973, Ron said his life’s goal was to become a sportscaster. So that career in the broadcast was always in his mind, but he opened it up a lot wider than any of us could have imagined,” says Ron Fournier, an advertising copywriter, who has known St. Pierre for over 40 years. “Ron is a virtual encyclopedia of comedy who has studied all the greats — from the Marx Brothers to the present day,” Fournier added. “That’s where his quick wit comes from. On the air, you never know what kind of quip or one-liner is coming next. But you know it’ll be a classic in his trademark. tongue-in-cheek style of humor.”

St. Pierre lives in East Greenwich with his wife, Patti, and their dog, Hazel.

Herb Weiss, LRI’12, is a Pawtucket writer covering aging, healthcare and medical issues. To purchase Taking Charge: Collected Stories on Aging Boldly, a collection of 79 of his weekly commentaries, go to herbweiss.com.