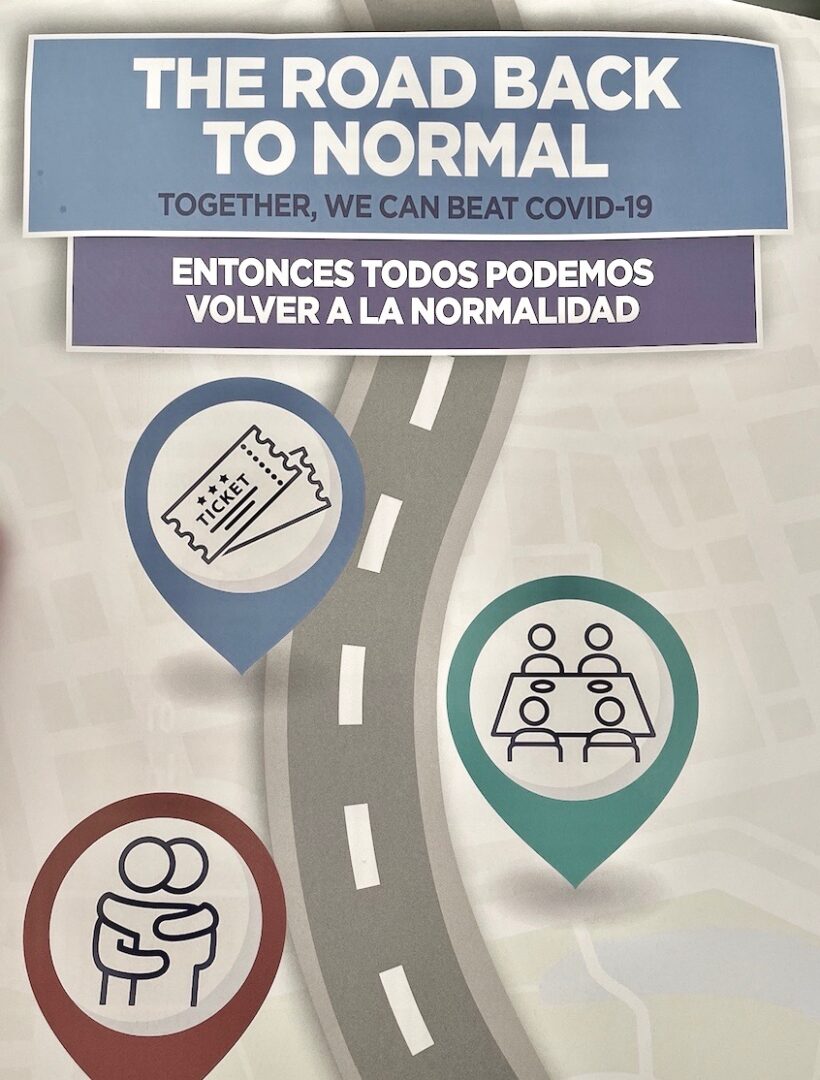 Take every step to stay safe.

A few weeks ago, a flyer was mailed out targeted to “Resident”, from the RI Department of Health. The large piece opens to a 24” X 18” oversized poster. Half in Spanish and half in English. It lists 3 steps to take – 1) Protecting your household, 2) What to do if you’ve been exposed, and 3) what to do if you test positive or feel sick. It also has messages to Get Tested, Social Distance, Wear a Mask, and Get Vaccinated. The piece carries a union “bug”, a symbol indicated it was printed by a union printer. Upon inquiry, RINewsToday learned that 446,000 were printed at a cost of 60 cents each. We have further requests in for more details on the item

The cost given to us by the Health Department comes to: $267,600. It is unclear if postage and design is included, and which company printed it.

As the vaccine is on its way to becoming plentiful, more emphasis will be put on getting resistant people to sign up. There has been discussion about public education campaigns and efforts to identify compelling messages and influential message deliverers to combat faulty feelings and build up compliance.

Dr. Fauci and others have pointed out that to meet true herd immunity, a 75 to 85% compliance must be reached that will be the majority of citizenry. Reaching audiences of high resistance and also high risk will be key.

A Kaiser Family Foundation poll revealed that among racial and ethnic groups,  that Black Americans are the most hesitant to get a vaccine, and continue to remain skeptical. In the survey, only 35% of Black adults said they definitely or probably would not get vaccinated, and were more likely than other groups to cite concerns about side effects and the newness of the vaccine.

A Pew Research Center poll showed only 42% of Black Americans said they would consider taking the vaccine, compared to 63% of Hispanic and 61% of white adults who would. These surveys come as the nation’s top health leaders urge Black people to trust the vaccine, hosting live events with Black health professionals at the forefront and looking for key Black role models to deliver the good news about vaccines protecting against coronavirus.

The Kaiser Family Foundation also reports that about a quarter (27%) of the general public remains vaccine hesitant. Vaccine hesitancy is said to be highest among Republicans (42%), those ages 30-49 (36%), and rural residents (35%). The main reasons are worries about possible side effects (59% cite this as a major reason), lack of trust in the government to ensure the vaccines’ safety and effectiveness (55%), concerns that the vaccine is too new (53%), and concerns over the role of politics in the development process (51%). About half of Black adults who say they probably or definitely won’t get vaccinated cite as major reasons that they don’t trust vaccines in general (47%) or that they are worried they may get COVID-19 from the vaccine (50%), suggesting that messages combatting particular types of misinformation may be especially important for increasing vaccine confidence among this group

African-Americans may be hesitant to take vaccines, largely based in generational stories about medical studies such as the Tuskegee Study.That study was conducted by the US Public Health Service, using black men to study the untreated effects of syphilis. It involved blood tests, x-rays, spinal taps and autopsies of the subjects. The study was never altered regardless of the identification of penicillin to cure the disease. Stories of this and other atrocities were passed down in families and shared. To think that not until 1972 the Tuskegee Study truly ended – by a whistleblower front page story in the New York Times. The Tuskegee Study is only the most dramatic example of inequitable treatment of African-Americans in the medical world.

Modern Healthcare says, “From elderly Cuban Americans in Florida to farmworkers in California, Latinos face daunting barriers to getting COVID-19 vaccines, creating risks for public health as the coronavirus mutates and spreads. 60 million Latinos — like other people of color — have been disproportionately affected by the virus, and many are struggling with issues like a lack of knowledge about the shots, state vaccine websites that don’t have Spanish instructions, ways to find appointments in their communities and fears they could be targeted for immigration enforcement. The Department of Homeland Security has been diligent in saying that vaccination sites will be considered off limits for routine enforcement, but the fear lingers.

Others have heard the myths associated with the vaccine, such as causing birth defects or causing infertility. Many are concerned also because the vaccine was developed in such record time, as opposed to the average 10 years or more in routine development. The connection with China and the thought of micro-chipping and DNA altering or mutations are other concerns.

NBC10’s Katie Davis did a story about compliance of firefighters and police with percentages of personnel saying they did not want to take the vaccine going from 25% to 75%. One consideration is that there has been a rather high rate of COVID among these demographics, and also more compliance since the original data was gotten may have occurred.

The CDC recently estimated that approximately 60% of nursing home staff have opted out of getting the vaccine. Massachusetts rates are estimated to be 55%. Groups on Cape Cod are calling for efforts to reach out to area nursing home employees there who seem to be refusing at a higher rate. The willingness to receive the COVID-19 vaccine immediately or in the future may be as high as 69%, nationally, but varies among subgroups of nursing home staff. Educating staff on the vaccine may be critical for increasing uptake. Widespread vaccination holds the promise of protection against serious illness and death and a return of visitors and activities that support improved quality of life. This promise will not be realized without strong uptake of the vaccines. (J Am Geriatr Soc 00:1-7, 2020).

The AARP estimated recently that only slightly more than a third of nursing home workers have chosen to get the first round of the vaccine, learned from findings coming just after the federal partnership with CVS and Walgreens to prioritize nursing home residents and staff for vaccinations wrapped up its first round of on-site vaccinations. “Barriers to [skilled nursing facility] staff member vaccination need to be overcome with continued development and implementation of focused communication and outreach strategies”.

According to Scott Fraser, head of the RI Health Care Association, “In checking with our members (skilled nursing facilities only) we were seeing about 60% uptake of the vaccine during the first round of injections.  After the second round, I am hearing of some homes in the 80% and above range for staff.  I don’t have numbers for every facility, but Rhode Island has been well above the national average, which was 37.5% for staff after the first round.  Overall staff acceptance at our member homes seems very good, but I cannot speak for non-members or assisted living facilities. I am not aware of any home making vaccinations mandatory, although it is within their authority to do so.”

One large nursing home chain provided both local and Massachusetts statistics to RINewsToday:

50% of associates have gotten at least the first of the two vaccinations.

80% of residents have received at least the first of the two vaccinations.

55% of associates have received at least one dose.

95% of residents have received at least one dose.

50.9% of associates have received at least one dose – with 26.9% fully vaccinated

Reaching out to seniors: Partnering with churches, temples and community organizations targeting seniors in low-income, minority communities who have struggled using technology to sign up for a vaccine will be key moving forward. Face-to-face interaction to literally sign up older people for shots have proven more effective than insisting on telling people to go to a website or call an automated phone line.

First Flyer from the RI Dept. of Health:

Prior to the large poster/flyer an 8 ½” X 14” flyer was received “COVID-19 Vaccines are coming to Rhode Island” with the message, Vaccines are safe, effective and the only way we can get back to our normal routines. It featured people getting back to normal activities such as a grandfather and granddaughters, a family meal, and a woman shopping, with safe vaccine information provided by RIDOH’s Dr. Chan.

Swag is evident at vaccination sites conducted by CIC Health. They include banners, posters, slogans, and bracelets and stickers for all recipients. Having early vaccinated people show this to their friends and family is part of the compliance effort the state is supporting.

According to Joseph Wendelken, spokesperson from the RI Department of Health, a full public education effort will be conducted to address specific target groups who need to be encouraged to accept the vaccine. A review of the website shows no other activities, posters, or materials, at this time.