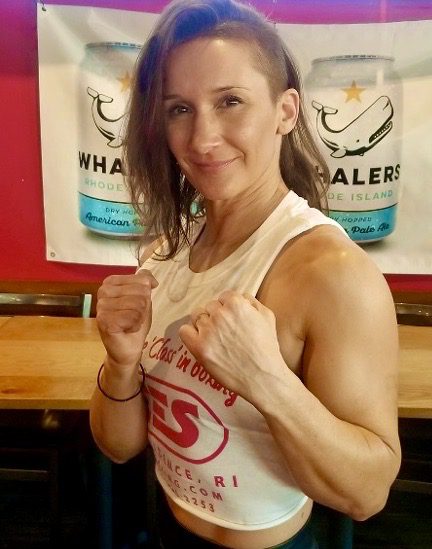 Thursday afternoon a press conference was held at Arooga’s in Warwick to announce the upcoming CES Boxing extravaganza being held at the Crowne Plaza on February 19th with a 7pm bell time.

The main event of the evening will feature the iconic Jaime Clampitt (22-5-2, 7 KO’s) vs Kim Wabik (4-1-2).  Clampitt, 46,  is originally from Saskatchewan, Canada, and now makes her home in Warwick, Rhode Island. She is a Hall of Fame trailblazer in the female boxing world.

She recently returned to the ring after an 8-year layoff. In addition to being the mother of 2, she owns On the Ropes Boxing and Fitness located at 334 Knight Street, Building #30 in Warwick. This will definitely be a hometown crowd for Clampitt. She appeared to be in tremendous physical condition and in her own words “I’m ready to fight today.”

Her opponent, Kim Wabik, is ten years younger than Clampitt and did not attend the press conference. She did, however, send a message that she is ready for the challenge. She deserves a lot of credit for taking this fight on Clampitt’s home turf.

The card will also have 5 other bouts featuring Lamont Powell (5-0, 1KO) of Providence, taking on Mitch Louis-Charles (6-2-2, 3KO’s) a Canadian fighter now residing in Boston. One of the more intriguing fighters on the card is Timothy Hatfield Jr. (2-0, 2KO’s) of Providence vs Kaleb Slaughter (1-3-1) from Cincinnati, Ohio. Hatfield attended Brown University prior to turning Pro. Wilson Mascarenhas (4-1, 1KO) from New Bedford will also be in action.

Promoter Jimmy Burchfield promised an exciting night of boxing action and suggested people get tickets early as they are going fast. For more information on this all-ages event, go to CESFIGHTS.COM