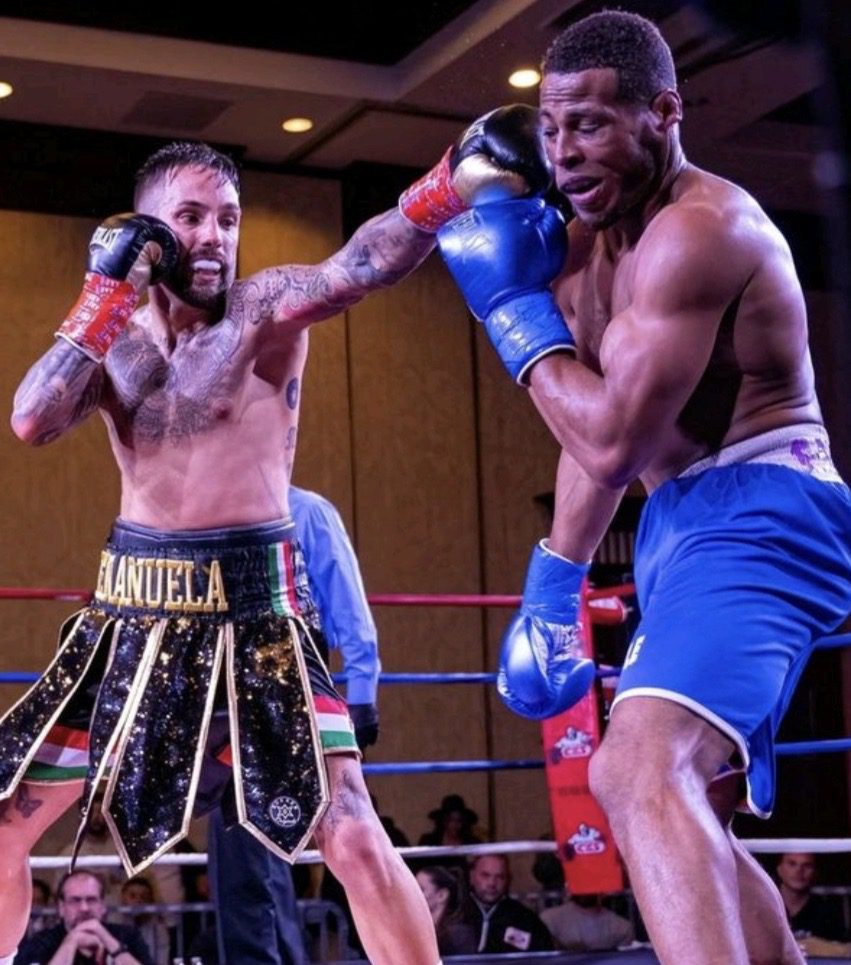 Upsets in the ring, and upset fans outside the ring, made for a wild night as CES Boxing, returned to the Crowne Plaza Saturday night. Fighters from around the world punched it out in front of a rabid capacity crowd.

In the opening contest, Nicola Quarneti (6-2-1) of Italy, defeated Keenan Raymond (1-2) of Providence, by split decision in a Super Middleweight contest.

I spoke with CES matchmaker and television play by play announcer Michael Parente for his feedback on the fights. In regard to Quarneti, he said, “Nicola was in a tough fight. Raymond has a lot of MMA experience. That was a fight Nicola had to grind out. What I’m getting from him is he may be a slow starter. I think he’s got the talent. He’s got the ability. I’d like to see him put more punches together, more combinations. Raymond’s a tough dude. He is elusive. He’s not the typical MMA fighter who also boxes. He looks the part of a boxer. He has the footwork and the head movement. He was hard for Quarneti to hit. To me, Nicola looks like a guy who would benefit more in a 6 or 8 round fight. It takes him a couple of rounds to warm up and that’s not the worst thing in the world. His cardio is good. I was looking forward to seeing him last night.”

Nico’s manager Dino Passaretta added, “I thought he did good. I think the guy he fought was very awkward. Nico was headhunting too much. He should have gone more to the body. If he did those things, he would have knocked him out, but a win is a win.” The crowd was solidly behind Nicola for the entire fight.

In the second fight, Heavyweight Quinton Sumpter (3-0 2 KOs) shocked the crowd by defeating Tim Hatfield (3-1 3 KOs) of Providence in a 4-round fight by split decision. Sumpter scored multiple heavy shots to Hatfield’s head over the course of the fight. Hatfield didn’t seem to have an answer for his opponent’s onslaught. Hatfield also appeared tentative for the entire fight. In sharp contrast, Sumpter looked relaxed and confident on his way to victory. As for Hatfield, Parente said, “He took a loss. I’m interested to see how he responds to a loss. It’s up to him what he does with it. He is kind of a late bloomer for boxing because he played football at Brown. He will either channel what happened as a learning experience, or it will spiral in the other direction. It’s really up to him.”

In a Lightweight contest scheduled for 6 rounds, Alejandro Paulino of New London, Connecticut, got up off the canvas to gain a unanimous decision over Andrew Rodgers of Elkhart, Indiana. This was a very exciting fight that saw Paulino take an overhand right to the head that sent him directly to the mat. The crowd was stunned. Paulino managed to survive the round. He went on to win by unanimous decision, while improving his record to 9-0 with 8 knockouts. Rodgers and his corner men were not happy with the outcome. As they left the ringside area, they could be heard saying “I guess that’s what happens when you come to Rhode Island.” Rodgers fell to 6-10-2.

Then it was time for the double main event. In the first half, New Bedford’s own Wilson“Ill Will” Mascarenhas, fought the very capable Abraham Perez from Cancun, Mexico. Wilson was faster and more well-conditioned than his adversary, but Perez came to fight, and he was tough. He took multiple combinations from “Ill Will” and never backed down the entire fight. Wilson was victorious by unanimous decision. Just like in Rhode Wars 1, Wilson had a huge presence in the crowd. They were vocal and they were loud. They call themselves, Team Ill Will, and they add a dramatic dynamic with the support for Mascarenhas. Ill Will improved his record to 6-1 with 2 knockouts as Perez dropped to 3-1.

In the second half of the main event, Yeison Vargas, from Cartagena, Columbia, scored a major upset over Ricky De Los Santos of Pawtucket. The referee stopped the fight after the second knockdown that sent De Los Santos threw the ropes to the ring apron. As he tried to gather himself and get back to his feet, the referee stopped the fight and declared Vargas the winner.

Ricky walked over to the referee to let him know he was ok. That he wanted to keep fighting. Then Ricky appeared to insist the fight continue. Unfortunately for Ricky, the fight was over.

After that, the mood in the Crowne Plaza ballroom turned ugly. Sitting at the press table during the fight, I could tell by the crowd reaction that both fighters had supporters, family and friends in the same section. Once the unpopular decision was made to stop the fight, supporters of De Los Santos became enraged. They began throwing things into the ring. The fans of both fighters began to argue among themselves. A good portion of them being female. Promoter Jimmy Burchfield was also sitting ringside and tried to calm down the crowd. For some reason, they began to turn on Burchfield, who in reality had absolutely nothing to do with the outcome of the fight. The mob became more and more angry until Warwick police arrived to restore order.

I asked Parente his take on the crowd reaction and he said, “It goes back to the theory of regional combat sports and people thinking the hometown guy is supposed to win and the promoter is going to somehow ensure that happens. That’s not a promoter’s job, it’s not the matchmaker’s job, it’s not the judge’s job. In fact, something the average fan is not aware of is the promoters do not get to pick the referee or assign ringside judges. We have no idea who will be sitting on those stools until they show up that night. We don’t know who the referees will be until they walk into the building. We don’t hire them. The state assigns them. We have no say in any of that. With all of that being said, I want to point out that the referees did a great job. Danny Schiavone and Ricky Gonzalez were both outstanding.”

All in all, the night was a major success. One thing is for sure, CES Boxing do not hand pick easy opponents for their fighters. They make them earn every victory.

I asked Parente if there would be a Rhode Wars 3 and he said, “Oh yes. Definitely. We will be back at the Crowne Plaza this summer.” Go to CESFIGHTS.COM for details on this and all CES Boxing and MMA events.