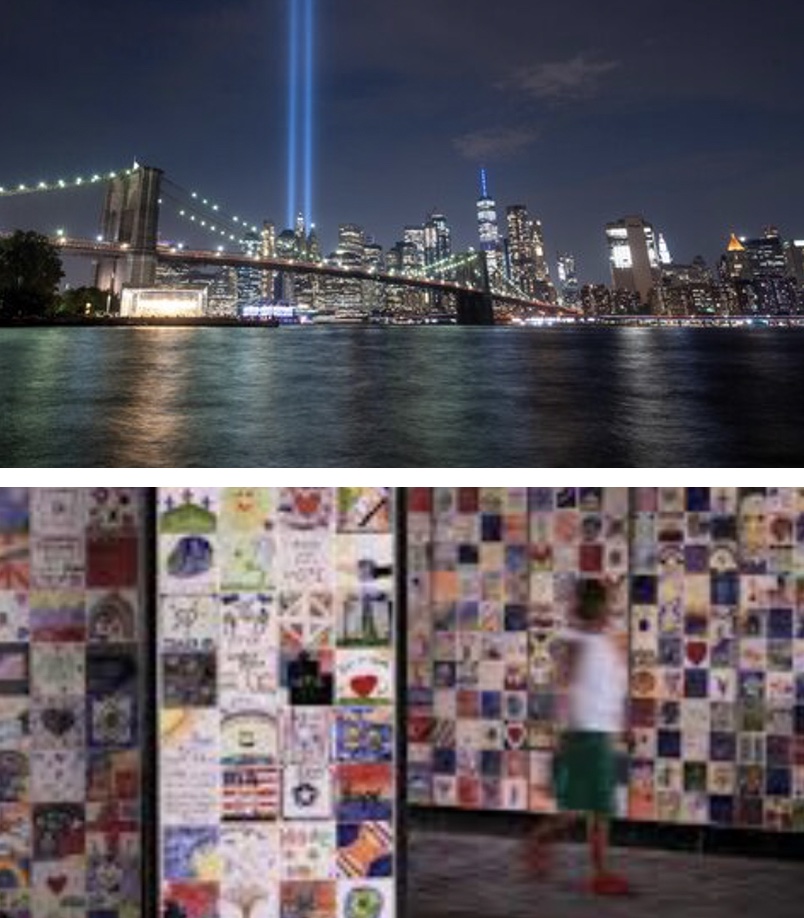 Photo: The Twin Towers light installation will go on, after briefly being canceled. Below, the tile installation in Providence that will be restored for year 20.

The 9-11 Wall of Hope, an extraordinary work of community art created by Rhode Islanders in the aftermath of the 9-11 tragedy, is being restored by generous donors and community partners in anticipation of a 2021 unveiling at a new, more easily accessible location. Jennifer Robinson, Executive Director of the nonprofit, Rhode Island 9-11 Wall of Hope Monument, created the organization specifically to reimagine, restore, relocate, and safeguard the iconic attraction for a new generation of Rhode Islanders. “For sixteen years, the Wall of Hope stood as a testament to the enduring strength of the American spirit,” says Robinson about the monument. “Not only does it depict our resolve as a country, but it is also a reflection of our diversity as a united people regardless of our backgrounds, race, religion, ethnicity, language, or socioeconomic status. The Wall of Hope was created by a beautiful and diverse kaleidoscope of men, women, and children who represent the very best of our American ideals.”

Robinson was one the original artists that helped bring the Wall of Hope to life and conceived the idea for the Wall of Hope memorial art installation in 2001 when she was working for the National Conference for Community & Justice (NCCJ) as their Director of Development. The Wall of Hope brought together the greater community, allowing Rhode Islanders to share and work through their grief, while also inspiring hope. Robinson worked tirelessly over the next year mobilizing communities, collaborating with amazing leaders and volunteers from every walk of life in Rhode Island, and shepherding the project from concept to its extraordinary unveiling – a city procession by torchlight from Kennedy Plaza to a commemorative Waterfire.

Junior Jabbie, one of the non-profit’s founding board members and the President & CEO of Banneker Supply Chain Solutions, also has a vested interest in seeing the 9-11 memorial return to its former glory. In 2002, Banneker played a pivotal role by donating their warehousing and logistics services to stage and assemble the tiles prior to their final installation in Providence. “The Wall of Hope is an integral part of our legacy as a Rhode Island-based company, especially considering our initial involvement during the memorial’s creation,” says Jabbie. “Twenty years later the world as we know it is as different as it is the same. Banneker is committed to Jennifer, the organization, and most importantly the memorial. Considering the challenges we face as a state and country today – social unrest, human and civil rights violations, the global pandemic, etc. – the Wall of Hope is as needed now as ever. This monument can once again serve its original purpose as a soothing salve to help repair raw wounds.”

The memorial is one of several public art installations across Downtown Providence and was located in one of the city’s world-class parks. “As the Creative Capital, our public art and memorials are representative of the vibrant communities that makes up our city,” said Providence Mayor Jorge O. Elorza. “Our Providence Parks Department has worked tirelessly alongside the Rhode Island 9-11 Wall of Hope Monument team to ensure that this piece is cared for and continues to honor the many stories of our community that it represents. I want to thank Jennifer for her passion and continued leadership.” Providence Parks Superintendent Wendy Nilsson added, “We are pleased to support this restoration project which will establish a permanent tribute to honor the enduring spirit of our City and State. With the revitalization of Waterplace Park well underway, we look forward to envisioning a new role for Waterplace Tunnel in the Downtown Parks network.”

Although the COVID-19 crisis has temporarily paused restoration activities, Robinson and her board are optimistic that work will resume in the near future. Once installed at its new location, the 9-11 Wall of Hope Monument will give Rhode Islanders and visitors from around the world an opportunity to reflect and remember. “Just as the original 9-11 Wall of Hope gave people the chance to join together to commemorate the power of love over hate, the new, reimagined site will bring citizens and visitors a tremendous sense of hope and optimism,” says Robinson.