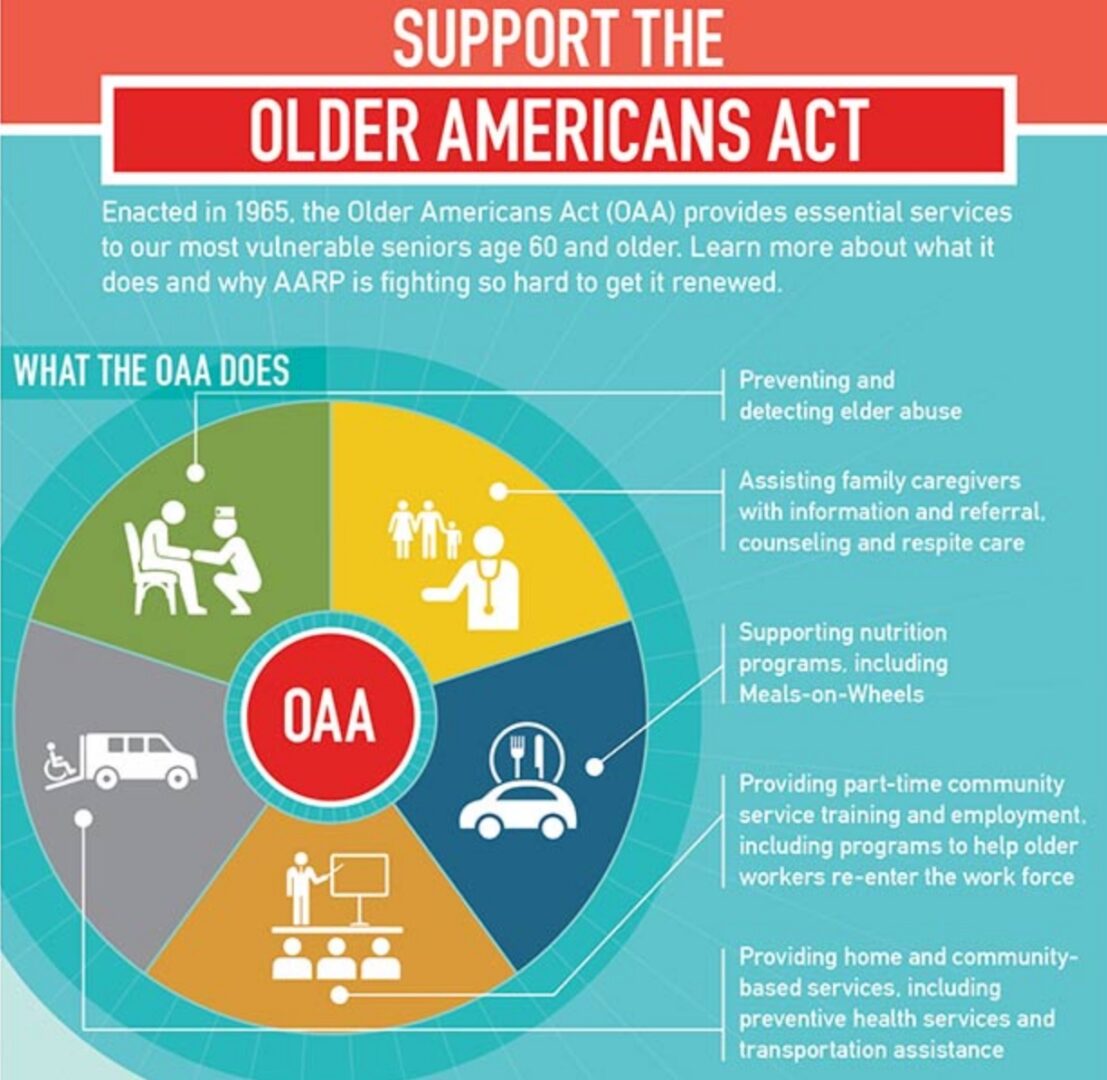 Reauthorization of OAA Now in the Senate’s Hands

Last month, after a 40-minute debate, the House moved to pass H.R. 4334, The Dignity in Aging Act of 2019, a bipartisan reauthorization of the Older Americans Act (OAA) that provides funding for a wide range of popular local and state programs. These programs make sure seniors have access to food thru Meals on Wheels, transportation, part-time job opportunities to support financial security and to combat social isolation and other basic services they need to live independently and with dignity.

Introduced on Sept. 16 by Rep. Suzanne Bonamici (D-OR), who chairs the House Education and Labor Committee’s Subcommittee on Civil Rights and Human Services which has jurisdiction of AOA, and 25 cosponsors (eleven Democrats and fourteen Republicans, the House Committee on Education and Labor reported out a marked-up 68 page bill on Oct. 28, and a motion to suspend the rules and pass the bill as amended was agreed to by a voice vote on the House floor that day. The bipartisan bill would reauthorize $12.5 billion through 2024 for AOA programs assisting seniors.

Although the Houses passes a bill to reauthorize the OAA, the Act expired at the end of the fiscal year on Sept. 30. With bipartisan support it is expected that the reauthorization will move through both chambers as quickly as possible. Until then, OAA programs will continue to operate, and funding will flow either through enactment of continuing resolutions (CRs) or final FY appropriations legislation.

The Nuts and Bolts

Specifically, the House passed AOA reauthorization bill establishes a National Research, Demonstration, and Evaluation Center for the Aging Network in the Office of the Assistant Secretary of HHS. It would create an initiative to coordinate federal resources to promote the independence and safety of adults living at home as they age. The legislation would also provide tailored support to family caregivers who play a vital role in helping again Americans maintain their independence. It also puts a stronger focus on addressing social isolation among seniors by empowering local organizations to test local solutions.

On the day of the floor vote, over 70 aging and health care groups including AARP, Meals on Wheels, the Medicare Rights Center, and National Association of Area Agencies on Aging, wrote to House Speaker Nancy Pelosi and Ranking Member Bobby Scott, urging the House to swiftly advance H.R. 4334 to reauthorize the AOA because the current reauthorization of the Act expired September 30, 2019.

The OAA, initially passed in 1965 with Medicare, Medicaid, along with landmark civil rights laws, as part of President Lyndon B. Johnson’s Great Society initiative. OAA currently serves roughly 11 million older Americans, including 3 million older Americans who regularly rely on this federal program to meet their basic needs. The law provides funding to each state based on its share of the nation’s older adults.

The population of Americans age 60 and over has grown more than 60 percent since 2001, but OAA funding has only grown by roughly 20 percent. In 2010, OAA funding was $42.95 per senior in today’s dollars. Today it is $27.25 per senior. According to the Government Accountability Accounting Office, as a result, 83 percent of low-income older Americans who experience food insecurity do not receive any meal services through OAA. The same report found that two-thirds of older Americans who struggle with daily activities received limited or no homebased care services.

Most important, The Dignity in Aging Act includes an inflation-adjusted 7 percent increase in funding for OAA programs in the first year, followed by a 6 percent increase in each of the four years that follow. This results in more than a 35 percent total increase in program funding over the five-year reauthorization period, boosting OAA funding above its historical high watermark in FY2010.

“Aging Americans have supported our communities throughout their lives – now it is our turn to care for them,” said Bonamici. “I’m proud that the House passed my bipartisan Dignity in Aging Act, which will provide seniors and their caregivers with desperately needed resources and expanded services,” says the lawmaker who was first elected to Congress in 2012.

“I have heard and read too many stories about seniors rationing medication or saving portions of their meals so that they can stretch their resources just a bit further into the week,” Bonamici said on the House floor. “… This bill provides a rare bipartisan opportunity to help millions of older Americans across the country spend less of their limited income on costly care and, just as importantly, to empower every individual to age with dignity.”

I look forward to working with my colleagues in the Senate so this legislation can swiftly be signed into law,” says Bonamici, who also played a key role in the last reauthorization of OAA in 2016.

After passage of H.R. 4334, Rep. David N. Cicilline (D-RI) said, “After a lifetime of working hard and playing by the rules, Rhode Island seniors should never have to worry about making ends meet. I was proud to support the bipartisan Dignity in Aging Act to help ensure all seniors can retire with dignity and economic security. The Senate should take this bill up without delay.”

According to Cicilline, “In FY18, Rhode Island received $7,013,999 through the Older Americans Act. These funds are used to provide Meals and Nutrition Services, Supportive Services and Preventive Health, and the National Family Caregiver Support Program. This reauthorization will mean that older Rhode Islanders will continue to receive these services,” says the Rhode Island Congressman who serves as co-chair of the House Democratic Policy and Communications Committee

Sweeney says, “an estimated 40 million family caregivers provide a staggering $470 billion annually in unpaid care to their loved ones—ranging from bathing and dressing to paying bills and transportation and assisting with complex medical/nursing tasks. By supporting family caregivers, we can help people live independently in their own homes, helping to delay or prevent more costly nursing home care and unnecessary hospitalizations.”

Sweeney urges Congress to reauthorize OAA by the end of the year to help ensure the sustainability of OAA programs.”

Now the action of reauthorizing AOA moves to the Senate where a bill has not been formally introduced. But Senators Susan Collins (R-ME) and Bob Casey (D-PA) the chairman and ranking member of the Senate Special Committee on Aging are working on a reauthorization bill, says Richard Luchette, Communications Director for Rep. David N. Cicilline. With Senate Majority Leader Mitch McConnell (R-Kentucky) systematically blocking Senate voting on House passed legislation, Luchette urges the McConnell to take up the House bill so that seniors will be provided the services they rely on.