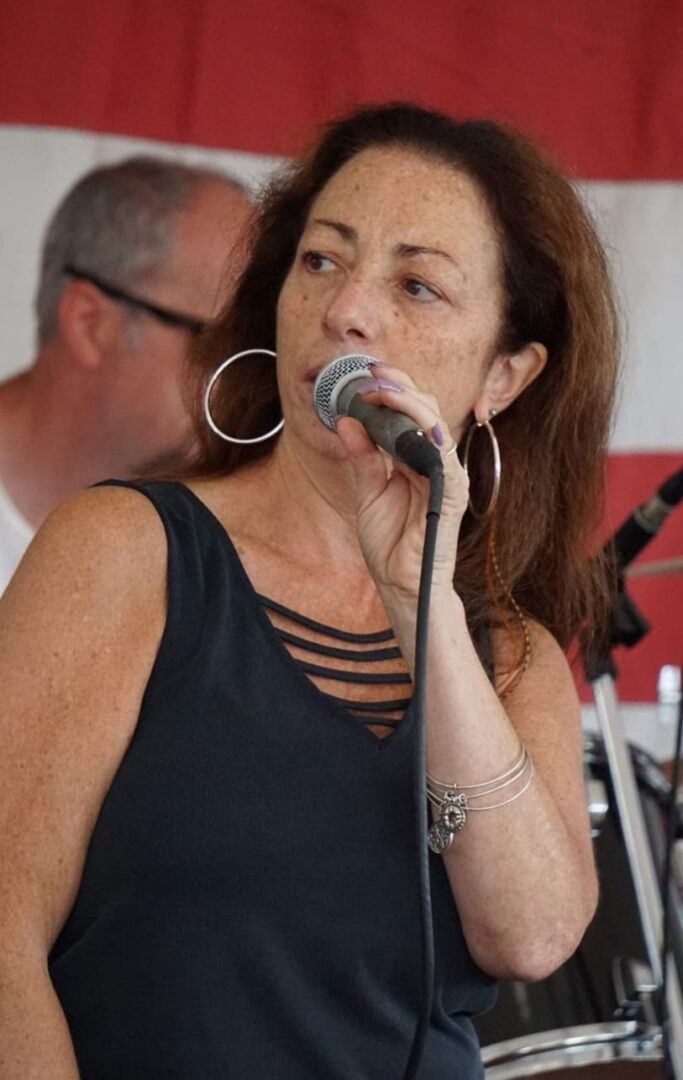 Queen of the Hill. A Musical Journey – by Brendan Higgins

Photo, above: Kerry Quinn Photography.  All the other photos, Kristyn Hill.

When she was just 5 years old, she already loved to sing. Her grandfather owned a wholesale liquor distribution company in Cranston. She would go out in the gigantic warehouse, climb to the top of the boxes, and sing out loud. Her voice would echo throughout the warehouse. She didn’t sing any particular song, in fact, she made up her own songs. This was when she first started performing. Her name is Kristyn Hill.

Kris is the only child of the late Patrick Hill and Jean Soscia. Her parents divorced when she was two. She lived with her mother in the Knightsville section of Cranston until she was twelve. Kris recalled her first memories of music. “I’ve always been in love with music. My mother used to get records, and I would sit and listen to them. I just fell in love. It was Stevie Wonder, Talking Book and Elton John, Caribou, and Rod Stewart. She also had a Joan Armatrading album I really loved. There were so many others. My father also had a profound influence on me musically. He was a Vietnam veteran. He was obsessed with music. In fact, music was always playing in the house, day and night. My father once told me music spoke to his soul. He really loved rock n roll. He introduced me to music. He was from the sixties. My father was the epitome of a hippie.”

As Kris entered her teenage years, she moved to Scituate to live with her father and her stepmother Kathy, her brother PJ, and her sister Kelly. Living in Scituate meant going from the city to a more rural setting. Kris recalled exploring the reservoir property by herself. She would spend hours on end in this heavily wooded area that went on for miles. It may have been ill-advised to venture into the woods alone, but Kris was different. She was not afraid of her surroundings. She also had a destination in mind. She loved to climb the fire tower. The tower is one of those if you know, you know, landmarks in Scituate. At the top of the tower is a spectacular view in every direction. The view is nothing short of breathtaking.

From time-to-time Kris would find herself running from the forest rangers, or city bums, as they were known to the area kids. Once Kris realized the rangers had spotted her, she would make a dash into the woods eluding the authorities until the coast was clear. Kris never got caught. She always made her escape on foot. Once Kris reached the tower, she would start at the bottom of the flights of stairs. With each step she climbed, the trees would appear to sink into the ground. Eventually, the top of the trees would move below her feet. This was an indication she was getting near the top. When she would take the last step, Kris would take in the majestic view. What Kris loved most about being alone in this magical place in the clouds, she could play music and sing her heart out. She said, “I also play flute. I would bring my knapsack and climb the tower, alone, and stay for hours. I loved it up there.” For anyone who grew up on Tunk Hill Road, in between Matteson and Franklin Roads, and as far down as Old Plainfield Pike, you made the hike, jumped the fence, and walked along the private road to get to the tower. Once inside the reservoir property, the roads went in all directions. The historical cemeteries along the side of the roads date back to the 1700s. Although the roads were asphalt, they were old and crumbling. The roads went right into the massive body of water known as the rez to the locals. Under the water, a thriving town once existed. Today, it would be a criminal act to trespass on reservoir property, but back in the 1970s, it was one of many exciting benefits kids experienced growing up in that part of Scituate. Kris Hill knew her way around those woods as good as anyone.

Kris graduated from Scituate High School in 1983. Then she was off to URI. She said, “So when I went to URI, there were a bunch of hippies. I always jumped up on stage. I was a wild woman. I started singing and performing at keg parties. I had a boyfriend who played bass. We lived on a sheep farm together. We started the band Acid Rain. We started playing out at the old Mews Tavern. We played hard rock like Heart, Jimi Hendrix, Janis Joplin and other stuff from that era. We had a 3-year run. During that time, I got a minor in music at URI in voice. I was also in a band called The Boogitos. We used to play the Narragansett Café in Jamestown a lot. When I was at URI, I was in the rock opera Spirit Warriors Dream with producer Ricardo Pitts-Wiley. I played Velma Kelly in Chicago which ran for a week at the Veterans Memorial Auditorium in Providence. I was also involved in this really cool psycho drama troupe. We went to high schools and performed and did improv. We had students come up on stage and become involved in the moment. When I met Frank Berg, we formed a duo vocally in The Ignitors. That band really took off. We did a lot of gigs.”

Kris recalled The Ignitors having different members come and go over the years. “Frank was the one who kept it going. There were different vocalists and different players. Then, about 10 years ago, Frank had a reunion with all the members from years and years playing in the band. We all showed up. It was a wonderful time.”

After the Ignitors ended, Frank and Kris formed a band called The Soul Searchers. Kris said, “We did the Providence circuit. We ventured into Massachusetts a bit, and we played in South County. Kris laughed and added, “I was in so many bands over the years. It’s hard to remember them all in order. I’m getting older you know.”

As our conversation progressed Kris Hill revealed she has her master’s degree and works as a licensed independent clinical social worker. She said, “I have been in the trenches working with traumatized children for years.

Helping kids get healthy is my goal. My specialty is working with children who have been sexually abused. I work with kids on setting boundaries and working through trauma so they can have healthy lives when they get older.” As much as Kris loves playing music, it was obvious what her real passion is. I noticed a strength in her tone of voice and her body language as she spoke about the noble work she does with children on a daily basis. Her heart was wide open on the subject.

Kris Hill may not be able to nail down the exact dates of her music career, but she has entertained countless people for decades with her beautiful singing voice. She explained, “Some of my personal favorite vocalists include Joni Mitchell, Joan Armatrading, Janis Joplin, Beth Hart, and of course, Ann and Nancy Wilson. I love Robert Plant, Jimi Hendrix, Elton John and early Rod Stewart. I also love Funk and Disco. There are so many singers and bands I love. I grew up in Scituate with that hard rock Franklin Road vibe. I can get down on any kind of music.”

As our conversation continued, Kris revealed the best is yet to come in her musical journey. She is excited to introduce her new band to the world. The name of her new project is near and dear to her heart. It holds a deep emotional connection for Kris and every one of her family members and friends. The name of the new band is Kidd Katy. Kris said, “Last summer I lost my 17-year-old niece Katy Hill, she was my brother PJ’s daughter. We lost her in a car accident. She was my little honey. My stepfather died right after that. Then two of my dogs died. It was the summer from hell. Now that we are starting to move away from Covid, I decided to create a new band. Its in the early stages. I’m naming it Kidd Katy in memory of my niece. Katy would play the tambourine with me all the time. Her loss was a huge trauma for our family. My brother will never be the same after losing his daughter.” It was obvious that Kris is still deeply grief-stricken speaking about the loss of her niece. However, she did have this to say about Katy. “She was fun loving. Katy was a very adventurous girl. She loved animals. She had a connection with them. She worked on a farm in Scituate. She also helped me on my farm when she was younger. She liked to put ponytails in my horse’s hair. She loved arts and crafts. She was very talented. She was athletic. She played soccer when she was younger. She was an all-American girl getting ready to graduate from high school.”

Regarding Kidd Katy, Kris has assembled some top-notch musicians for her new musical venture. She said, “After playing in bands all these years, I’ve learned how to put a band together myself.” Kidd Katy has an impressive lineup including, Duane Shepherd on guitar, Ray Bennett on bass, Garo Mikaelian on drums and Kristyn Hill on vocals. Kris revealed there will be other surprises with people sitting in from time to time. Kidd Katy will kick off the summer playing July 23rd at the Updike Room at the East Greenwich Hotel. They will also be performing at Women Who Rock at the East Providence Yacht Club on August 13th.

When Kris finally gets some down time, she loves to spend it on her farm. She is a huge animal lover. She said, “Animals are my source of affection and nurturing. My whole family, my grandmother, animals are our thing. They have always given me comfort. I love their innocence and beauty. To me, God made them perfectly. Each and every one of them. I have 2 mini horses, 2 Shetland sheep and 2 rescue dogs named Pearl and Sully. With her counseling career, and being a lead singer in a band, I asked Kris how she maintains a farm all by herself. She smiled and said, “I don’t know, I just do it. It’s like, when I go out to the barn, I have to do it. Once I’m in the barn, it becomes a meditative state. It’s called Moon Hill Farm. The smell, the animals I just love it. I have been on this farm, which I bought by myself, for 21 years.”

Kris Hill has lived a remarkable life. She has touched the hearts and souls of many along the way. Most notably through music and her desire to help children. Be sure to check out her new rocking band, Kidd Katy, coming this summer. For more information on bookings, you can visit the Kidd Katy Facebook page: Kidd Katy Music or email Kris at simonsimon6@cox.net