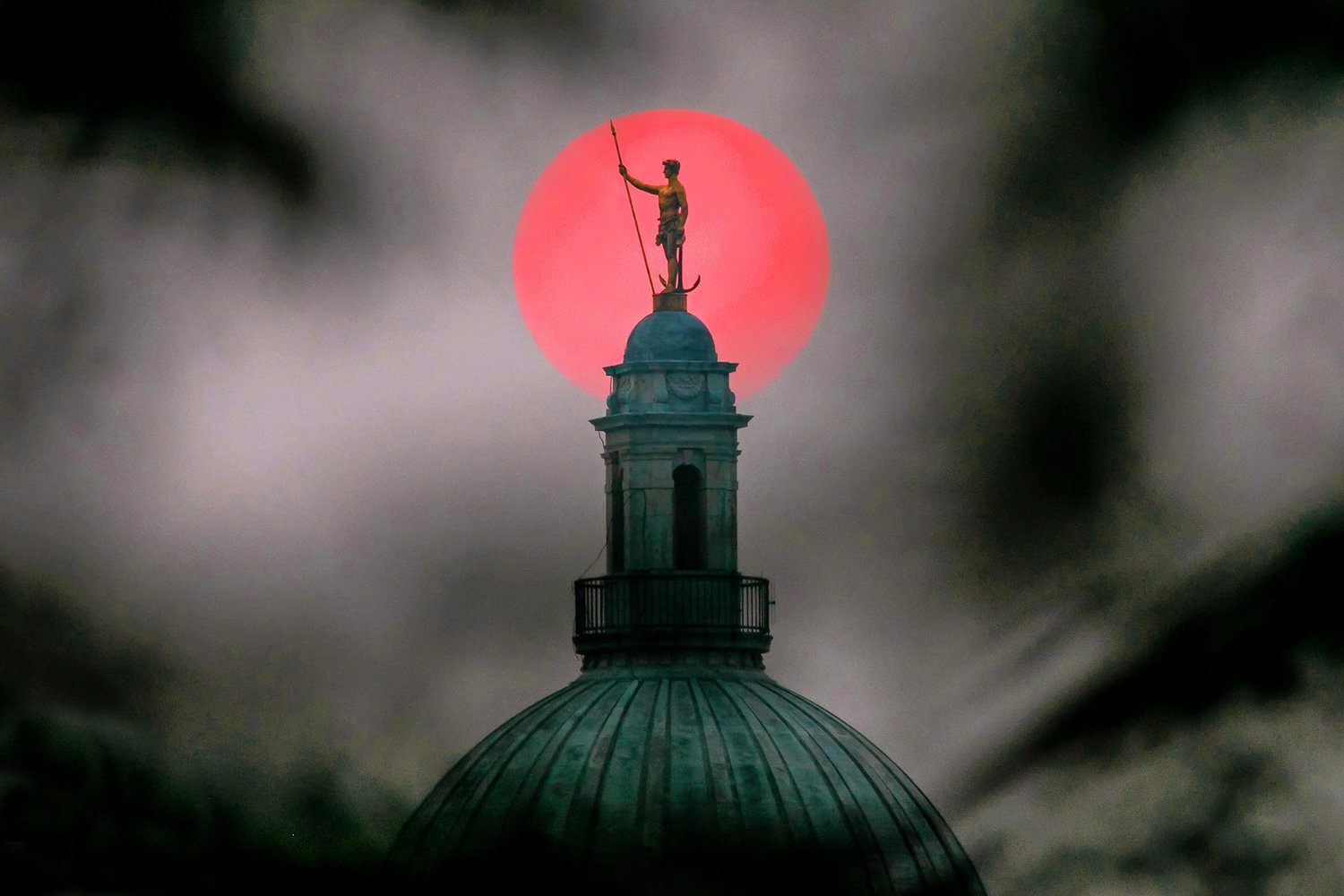 Photograph by Mike Cohea, The Independent Man atop the Rhode Island State House framed by a reddened sun, tinted by the smoke from forest fires in the American West.

This summer, the ominous signs of climate change threats have become harder to ignore or deny. Every day, it seems, brings a new level of urgency: everywhere across the globe are ravaging floods, extreme drought, rising sea water levels – and quickly disappearing options about exactly how long we have to take action.

The haunting photograph by Mike Cohea of the Independent Man atop the State House, silhouetted by the reddish sun tinted by the haze of smoke from rampant forest fires in the American West, captured the ominous tipping point we now face in Rhode Island and the nation, in understanding and responding to the immediacy of the threat of climate change.

In Providence, a new organization, the Providence Resiliency Partnership, created by Arnold Buff Chace, Jr., founder of the development firm Cornish Associates, is seeking to be a catalyst in planning and making needed infrastructure investments around the climate change threat. His partners in the effort include Curt Spalding, professor at the Institute at Brown for Environment and Society at Brown University, and Pam Rubinoff, associate coastal manager for URI’s Coastal Resources Center and Rhode Island Sea Grant.

The goal of the new organization, which Chace likened to a start up, is to build a partnership between businesses and institutional partners to identify the necessary infrastructure investments needed to protect the future of Providence – everything from the creation of a unified flood plan to a vision of greening the port of Providence.

To do so, Chace is working with the Providence Foundation and a number of institutional partners, including Brown, RISD, and Johnson and Wales University, in close coordination with Sen. Sheldon Whitehouse.

Here is the ConvergenceRI interview with Chace [and, in Part Two, an interview with the communications consultant Paul Tencher, who is attempting to brand the messaging of the Providence Resiliency Partnership], with an anticipated launch after Labor Day of a list of infrastructure projects to be undertaken to preserve the future of Providence.

ConvergenceRI: What is the status of your work with the Providence Resiliency Partnership?

CHACE: Right now we are using a search firm to look for a full-time executive director for the Providence Resiliency Partnership.

Also, we do have a communications consultant we have hired, Paul Tencher. He worked down in Washington; he most recently worked for Sen. Ed Markey and also for John Kerry on the work that he’s been doing on climate.

He’s been helping us, for instance, if you saw the article that Alex Kuffner did for The Providence Journal. He is working on a potential article with Dan McGowan. As a communications guy, he is probably more organized than I will be in discussing it.

This all came out of a symposium that URI and Brown held in 2019, at the old power plant [South Street Landing]. They basically brought in experts and talked about climate change and sea level rise.

What I recognized is that the private sector and the institutional sector needed to come together and not rely on government so much to deal with these issues.

Given the idiosyncratic nature of Providence’s private sector, in the 2000s, so many of our corporations were purchased by outside national and regional companies, the actual ability for the corporate sector to be influential or to provide resources for this type of thing has been reduced. The leadership is more in the institutional sector now.

ConvergenceRI: How would you define the challenge?

CHACE: The challenge is to try and bring together the focus on the non-governmental groups to this existential challenge. People are very interested. We have also engaged with Sen. Sheldon Whitehouse’s office and Sen. Whitehouse himself, working to identify projects that might be attractive for the new infrastructure legislation that will come through.

ConvergenceRI: And, how would you define the role of the new group?

CHACE: We are a start-up organization called the Providence Resiliency Partnership. We are in the process of hiring a full-time executive director and necessary funding to really be a bona fide group.

We then want to identify projects in both the short-term and medium-term that could attract funding and that are vital to protecting the city, Richard.

And then you realize what a big word resilience is. Because it is not just climate change and sea level rise that are putting this word – and this concept – on the table.

There is also economic resilience; there is neighborhood revitalization and there are public health issues. And there is the reinvention of the economy. All of these things kind of tie in [together].

Take, for instance, the port of Providence. With sea level rise, depending on whether you are talking about 2050 or 2100, the future of the port is in question, unless we respond.

By the same token, many of the businesses in the port are old paradigm businesses. The Port of Providence, which is a separate part of the overall port, that is modern and led by Chris Waterson [general manager of Waterson Terminal Services, the facilities manager for ProvPort]. He really gets the opportunities around the ways of being resilient. He is a member of our group.

But, then you also have the neighborhoods that are adjacent to the port that are concerned about public health issues, and they are rightly concerned.

If you green the port, if you make the port more resilient, by electrifying it as opposed to having fossil fuels burned there, you could improve the health outcomes potentially of people who are living adjacent to it.

At the same time, you can also streamline the area and make it attractive to this offshore wind industry. So, we have the economic opportunity to basically rethink the port while making it more resilient, while improving the health outcomes of the neighborhoods, while creating jobs. That is just an example of the type of thing that we could do.

But the first goal is to make it more resilient to climate change, a very existential threat. I hope that people will be able to engage around aspects of it, to see it as an opportunity to create a 21st century economy.

ConvergenceRI: Who else is involved in the new partnership?

Now, we’re trying to grow the organization. There was a feeling, early on, that we didn’t need another 501(c)3 [a tax-exempt nonprofit] downtown. It is more of a network at this point.
We can change that, and we are working with the Providence Foundation on whether to create a separate 501(c)3. We will have to decide what is the best way forward to receive the necessary funding.

As I said, the goal is to get the institutional sector, the private sector and the philanthropic sector aligned on this – and, then to ask the government to join us. We can work with the government along the way, but we recognize that the government is resource constrained – I am talking about the local government here, as opposed to the feds. It is also great to have the federal delegation so interested in the subject of resiliency.

ConvergenceRI: There is a proposal by a local community group to plant 5,000 trees in five years in ZIP code 02905 as a way of greening the neighborhoods around the port in South Providence. Are you familiar with that proposal? [See link below to ConvergenceRI story, “Imagine: plant 5.000 trees, in 5 years, in 02905. ”] Would that make sense as an infrastructure to build resiliency?

CHACE: Yes. In Zoom calls with folks, I have heard about these proposals and I am totally supportive of them, if we can organize something around the port which is a specific project, by all means, we would like to include funding for that effort as well.

In greening the port, it also means involving the cranes that are operating in the southern part of the port, powered by fossil fuels, that could be electrified as well, so that the actual exhaust [could be diminished]. Also, the ships that come into the port often run their generators while they are in port; if we could upgrade an electrical micro-grid of some kind, which would improve the air quality.

I am totally down with the idea of trees. One of our colleagues is David Johnston of the Resiliency Network in Charlestown, S.C. We have had an extended number of calls with him and his group.

If you look at the news this morning [July 14], and see what is going on in California, we are not going to be too far away from extreme heat. So, I think that creating a tree canopy [is a good idea].

And cooling centers. The Providence Technical High School is a potential site for a cooling center, where people can go in the neighborhood that do not have air conditioning or whatever, to get out of the heat.

But trees, obviously, once you get into the whole issue around tree canopy…

I am also hopeful that as Brown expands its public health footprint, that they will be partners in this type of activity.

ConvergenceRI: Have you been able to meet with Dean Ashish Jha?

CHACE: I haven’t, no. You can just turn on CNN and meet him. But I hear he is a wonderful guy, and open. Russell Carey [the executive vice president for Planning and Policy at Brown University], the number two guy at Brown, is on our team. I think it is just a matter of time.

ConvergenceRI: Two events yesterday seemed to crystallize the problem with perception around the business community. There was a ranking published by CNBC about alleged business friendly states, and Rhode Island was ranked very low. At the same time, the R.I. DEM rejected the permit application for a facility to burn medical waste.

The owner of the MedRecycler facility, Sun Pacific Chairman and CEO Nicholas Campanella, wasted no time in connecting the two, saying: “This decision makes it perfectly clear why Rhode Island’s business climate was ranked 46th out of 50 states earlier today.”

My question is: How do you change the perceptions around businesses about what constitutes business-friendly, when it comes to climate change threats? Would not the decision by R.I. DEM be seen as something that was business friendly because it helped to preserve a better quality of life for Rhode Islanders?

CHACE: I am going to have to think about your question. I hear what you are saying. Whenever I see us at the bottom of some category, I just try and avoid it. Your are making an interesting point, that the lists themselves are suspect.

ConvergenceRI: When we talk about resilience and the business community, sometimes the metrics do not make sense. The reasons why people love to live in Rhode Island has to do with the quality of life that we have, and our relationship to0 Narragansett Bay, the fact that we have great access to the natural world.

It seems to me that if we want to attract more people and more businesses to Rhode Island, rejecting a medical waste facility, which would appear to improve the long-term quality of life, might be seen as business friendly.

CHACE: I like that. I am an optimist. I fall into that same category.