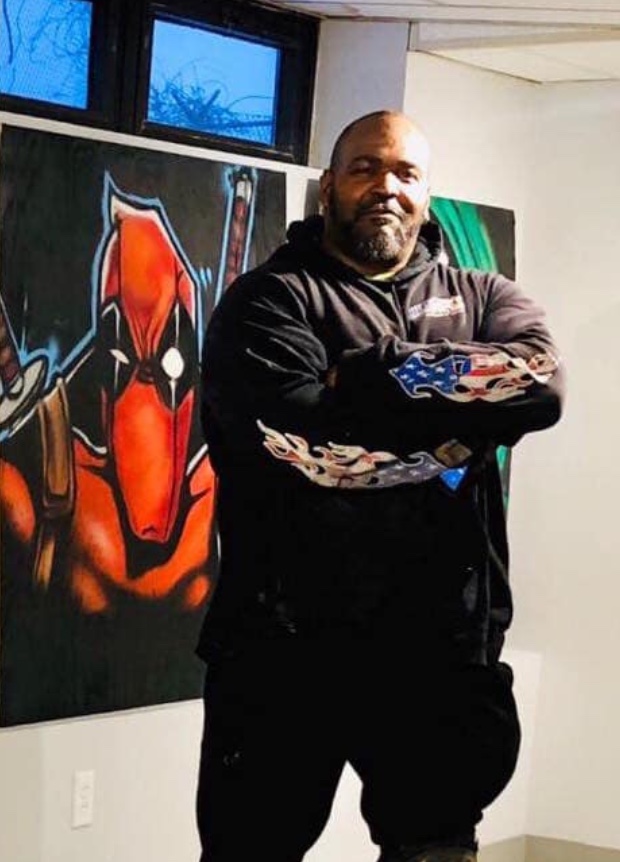 Futura, whose story is told in “No More Rulers”, is a legendary 1980s graffiti artist. He explains that the book was a “way for me to exist” – I wanted the world to know my name. I wanted to be somebody. The essence of what graffiti is is creating this identity and taking it to the public.”

During a time when our collective spirits are dampened by COVID-19, Morse plays the role of spreading cheer with graffiti. As a staff member for the East Providence Arts Council, Paul is charged with bringing the best of Rhode Island art and artistic entertainment to the City. And he does that in a very big way.

This Christmas season, with his traditional artist’s tools of airbrushes, acrylics and oil paints, albeit some in spray cans, this professional graffiti artist painted a Grinch-themed mural with images of Santa Claus and Frosty the Snowman donned in masks on his neighbor’s garage wall, which faced into his yard. It got a lot of attention, from the neighbors and from local media. NBC10 did a story on Morse and he invited neighborhood children to stop by and take selfies and photos for the holidays in front of the bright, cheerful, graffiti painting.

What’s ahead in 2021 for this inspirational artist? Despite recovering from a knee replacement surgery, he has several projects scheduled, including a mural for the Warwick Fire Department lodge. “I am super excited and pumped up for that one” says Morse.

Morse acknowledges that some may not view graffiti as an art form, because graffiti artists sometimes do not play within the rules, and cause damage. Admittedly, back in his more rebellious youth,” I would paint anywhere on public buildings, on a house’s garage, on an underpass or underground on New York City subways.

By their nature, graffiti artists break the rules but that doesn’t have to be destructive. Some businesses could use some sprucing up on their plain concrete exteriors. A perfect canvas for Paul Morse!

After 9-11, Morse engaged with local youth in buying pizzas for his city’s police departments. Using art is one way to foster peace. Using a wide smile and an infectious laugh and positive being is another way. During that time, he used the hashtag #BeStrong to bring people together.

Just hearing his plans for the future as a professional graffiti artist who has mastered his craft to bring joy to an elderly neighbor and local children, to lift the collective spirits and hearts of a whole community, Morse navigates difficult times of a pandemic one more day, with a positive spirit and a playful artist mind – as he promotes his #BeStrong message to live peacefully and joyfully together.