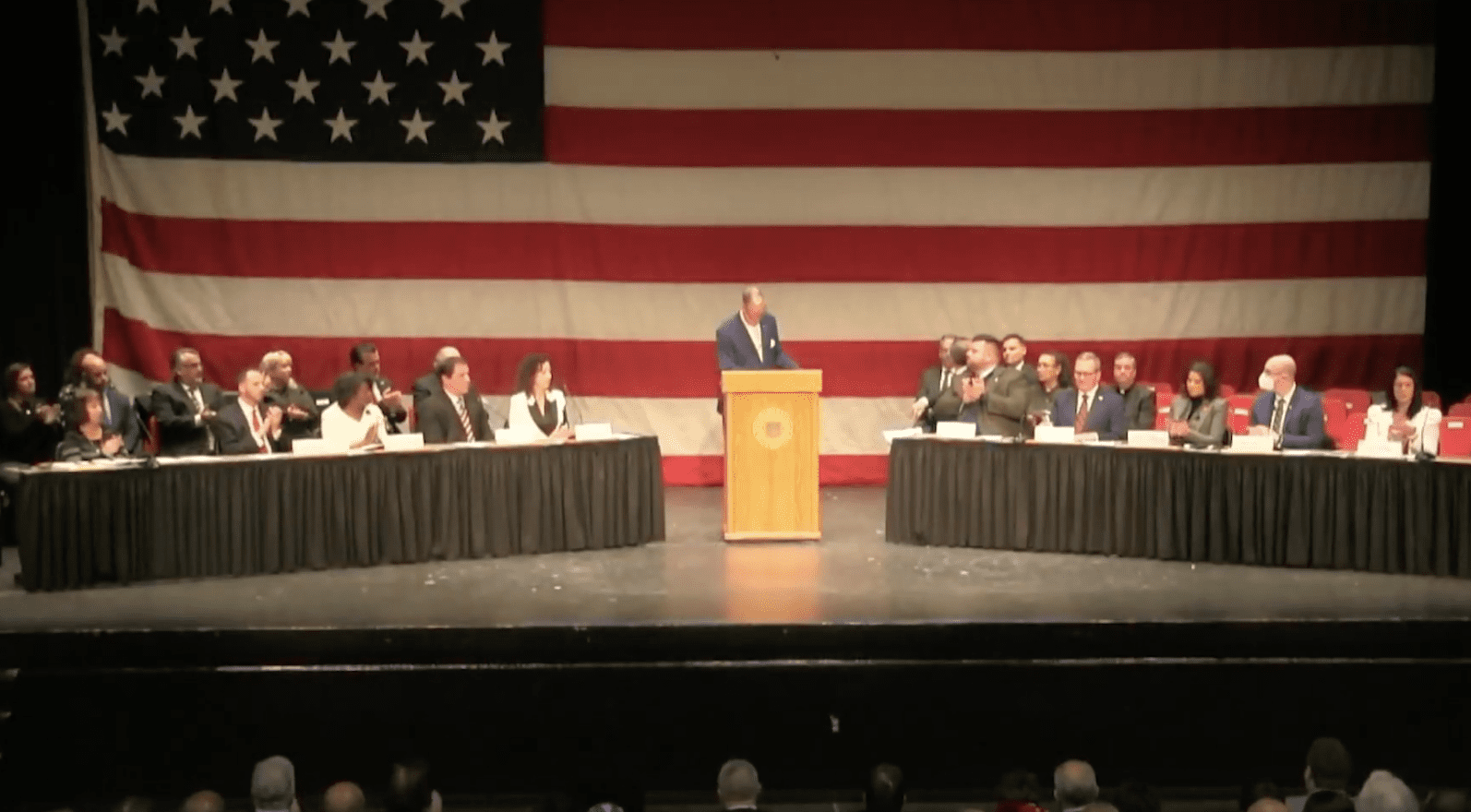 A member of the Garden City Alliance perhaps expressed it best: “we’re sick of it”. Referring to the politics of getting almost anything done in the city of Cranston – “To know who will help you you first need to find out their party, and that will tell you everything.”

With the majority of the Cranston City Council now in the hands of the Democrats, by a margin of one, 5 to 4, the political contentions show no signs of stopping, with the first shot happening at the first meeting of the Council, albeit respectfully at the ceremonial inauguration event. The edge was palpable, and predictable.

Several Cranstonians expressed their surprise – and some their amusement – at the slate of Municipal Court judges being presented as a block for one vote – all in or all out. – varying from the usual one candidate at a time, with ample opportunity for questions or concerns to be raised and addressed. A few shaking heads, bipartisan at that, did not go unnoticed. With the candidates already in the audience, prepared for their swearing in, most with black robes ready to be donned, to have had a discourse back and forth at that time would have been rude and even more of a spectacle. Astute Cranston politics aficionados could follow the seething undertones without going that far, though Republican leadership said later that they would have been welcome to vet them publicly at that time.

Regardlesss of which party is in control of the Cranston City Council, the use of ZOOM and YouTube for citizens to watch from home has been a useful tool. Designed to protect in times of COVID, it served to open eyes and ears to what happens at a city council meeting. While the past year was quite civil in nature, there have been years where the Cranston phone-trees were lit up with amusement or anger at the goings-on.

WPRI did an interview with Jessica Marino and Lammis Vargas on their new roles as Chair and Vice-Chair of the Cranston City Council, the first 2-female team to head the council. The interview came just after the Republican contingent on the Council cried foul for the way the municipal court judge vote was handled and published a letter to that effect. Here is the interview (click on the link below the photo):

In the interview, Marino said her role as leader of the city council is about giving back to the community, even though she knows it won’t be easy. She said she already received notice from the Republican caucus criticizing how she handled the selection of municipal court judges at the inaugural meeting.

“I know full well what comes with the job and you cannot control other people,” she added.

“It was very humbling,” Jessica Marino said after the unanimous nomination for president, which she called unexpected. “For them to have that much trust in me was very comforting.”

While the reporter held up the Republican Caucus letter, she did not say what the issue was, just that opposition was already happening.

The last inauguration was a historic moment for Cranston as well, since it was the first time women held four out of the nine seats on the council.

The four Republican members of the Cranston City Council have criticized the council’s Democratic Majority for an absence of transparency and suppressing any real vetting in consideration of the Municipal Court Judge appointments that were before the body at its inauguration meeting, held on January 2nd. they sent a letter from the “Republican Caucus” to the council. In part, it read –

Majority Leader, Councilman John Donegan (D), making a motion to take the slate of nominated
judges ‘as a block,’ and the new Democrat Majority diverted from its past protocols of voting for each, individual, nominee. That prevented any discussion on the judges up for consideration. veered from past tradition that allowed for individual votes on each judicial candidate.

Republican Minority Leader and City-Wide Councilwoman Nicole Renzulli said, “Pushing through a block vote for these important positions of trust was disrespectful to the public and the judiciary. The new Democratic leadership treated these appointments like we were renewing mobile food truck licenses.”

Shocked at this unprecedented move, Renzulli sought to offer a compromise by motioning to
continue all judicial appointments from the celebratory inauguration to the full Council meeting at
the end of the month, where members could voice their concerns and ask nominees questions. That motion was immediately voted down by the Democrats.

Councilman Reilly expressed disappointment in the newly elected Council President Jessica Marino,
who moments earlier had promised her presidency would be one marked by leading in “an inclusive
manner, with integrity, transparency… and a conversation with the community.” Reilly explained,
“The first substantive vote of her tenure was a maneuver by the Democrats designed to negate the
views of their Republican counterparts, before we even had a chance to express them.”

Two years ago new Majority Leader John Donegan (then a minority member) exclaimed that the process of selecting judges in Cranston “was broken,” that these were not“ patronage positions,” and that the process needed to be revisited by the council. “Two years later when his party controlled the vote, John’s calls for ‘transparency and a thorough process and vetting’ for municipal court judges was all but forgotten,” Reilly pointed out. “I guess the political criticism he voiced two years ago as a minority member doesn’t apply now that he is in the controlling majority.”

Councilman Paplauskas also criticized the new Democratic leadership, saying “the [December 20th advisory member report] …was not even read into the record.

The four Republican council members were in agreement that the 2023 inauguration meeting was not
a good first night for the Jessica Marino led City Council. Minority Leader Renzulli concluded, “Any issue that may potentially undermine the public’s confidence in the integrity of our court should be discussed, for transparency purposes.”

Providence Journal article: “Rhode Island’s municipal judges are in a world of their own”

Taking on the topic of municipal court judge elections, and prompted by the kerfuffle around the reappointment of Providence Municipal Court Chief Judge Frank Caprio, reporter Katherine Gregg reviewed several judgeships in RI municipalities. In her article she noted there are “more than 40 municipal court judges in at least 26 of Rhode Island’s 39 cities and towns” – and “they are blatant political appointees of their local mayors − or city and town councils”. Renzulli noted, “While Council President [Jessica] Marino may be correct that all the nominees are attorneys in ‘good standing,’ and we do not doubt their abilities to perform the job duties of a judge, we believe we (and the public) deserved the opportunity to hear [answers from candidates to our questions].

In a wide-ranging interview with Cranston Mayor Hopkins, in the Cranston Herald, Hopkins said, “…there were a lot of new, young faces on the council that really didn’t understand the process of how government works. They’ve got to understand that their job as the legislative branch is to make the laws. That’s their job. Handle, but not demand constituent affairs.”

The Herald noted that “He hopes the administration and council will be able to work together, and he recently met with the new council president, Jessica Marino, to discuss trying to do what’s in the best interest of the city. “Sometimes, people think you have ulterior motives or play politics. I can’t stand politics. I really don’t like it,” Hopkins said. “The biggest challenge I had was the politics of us versus them. The administration versus the legislative branch.”

“This should be a time of unity with our primary focus on the financial well-being of our city and serving the public in unison.

…whereas in the past Republican majorities have not allowed debate or discussion on judicial nominees, including when appointing gun lobbyists, all council members were provided the opportunity for discussion on these nominees at this inaugural meeting on January 2, 2023. Whether taken as a block or individually is of little significance since the council was still free to have discussion on the judicial nominees. Instead of taking the opportunity to express or vet any candidate that may have been of concern by the Republican Caucus, they did not do so, and over a week later they put out a press release that reads like a tall tale….

The Republican council members cannot cry foul when the opportunity was in fact provided, and they opted not to vet any candidates.

The truth is, all members of the Cranston City Council were provided the resumes of all judicial nominees days in advance of our inaugural meeting as distributed by the city clerk consistent with past procedure. Republican council members had the opportunity to vet all candidates, discuss their qualifications, and debate the issue on the night of the vote. Despite these opportunities, the Republican members chose not to. While the Cranston Republicans are busy weaving tall tales, and self-titling them as such, Cranston Democrats are focused on leading our City Council and working in the new term to address the myriad of issues facing Cranston residents.

One Cranston a stretch goal

In Mayor Hopkins’ inaugural speech he noted, “it is in doing what is best for our tax payers, and not partisan motives that should guide us”.

And so it goes into the new year. Cranstonians listen to the word “bi-partisan” on everyone’s lips, yet in practice much of the hard work of what that means needs to be done to achieve Mayor Hopkins vision of a “One Cranston, One Heartbeat”.