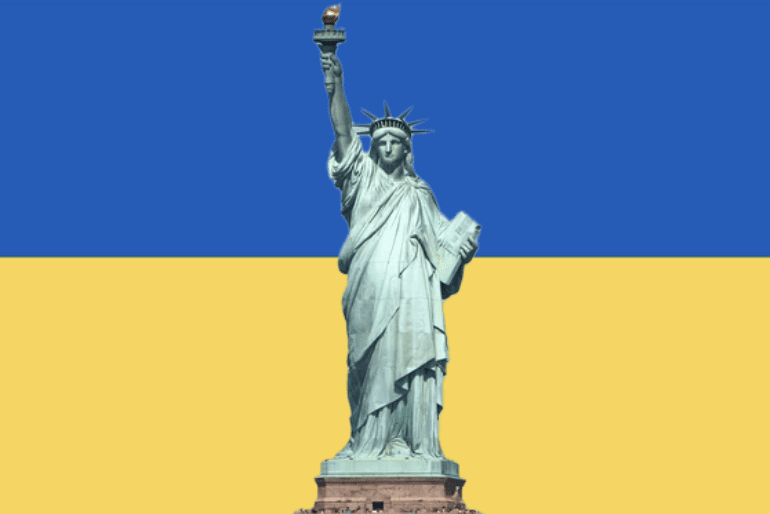 A monument still stands over Babi Yar.  But five people died there yesterday, March 1, 2022, in a Russian missile attack.  Bari Yar is a ravine, a pit just south of Kyiv, where 34,000 Jews were machine-gunned by the SS and buried in a mass grave on September 29 and 30th, 1941.

Now the pit opens its yaw in front of us again, the cliffs sheer and black, the cavern deep, a cold wind blowing up from the depths into our faces, the SS at our back, their guns locked and loaded, waiting only for the order to fire.

In Kyiv, in Kharkov, in Odessa, Kherson, and Donetsk and Luhansk, in Melitopol, and Mariupol. In Lviv, in Chernobyl and in Babi Yar itself, the Ukrainian people are in the street, fighting the invader, fighting fascism and its lies, fighting for freedom and for democracy. Fighting alone.

The vultures are flying again, blocking the sunlight. Tyrannosaurus Rex has left his cage.  A new virus is spreading without control, eating flesh.

There is no time for monuments now.  This is not the time to hang pictures on the wall.

The beast, the reptile, the dinosaur that stalks the Ukraine from north, south and east has raised its head again. We know his name: Amalek, Genghis Khan, Attila, Hitler, Franco, Mussolini, Stalin and Mao. Ghaddafi, Amin, Bashir al-Assad, Pol-pot. Chavez. Maduro. Ortega. One from every country. Every continent.  Every generation. Every ideology.  Every time zone. Putin. Trump. Bolsonaro.

We want peace, not war.  The reptile lives for blood, for conflict, lashing his tail this way and that, oblivious to suffering, serving only himself.  Call it fascism.  Call it communism.  Call it globalism.  Or capitalism.  Or socialism. Or the caliphate.  The reptile uses these names like a card dealer uses cards, to distract and deceive, never to pray, labor, or love.

Today the Ukraine stands alone. Yes, there are sanctions.  Yes, states and other nations light up their monuments with blue and gold, the colors of sky and wheat, the colors of the Ukraine. People march and carry flags. Airplanes land with goods.

Babi Yar. Where 34,000 were machine gunned, dumped and buried in a mass grave. The blindfolds are on. We face the ravine and wonder if we will hear the gunfire before the bullets rip through us all.

Oh, my great Russian people?  What have you allowed in your name? How long will you be silent? How long before you rise up?

Where are you now when we need you most, Gogol and Pushkin? Can you see the irony in this, Lermontov, Babel, Chekov, and Akhmatova? Why didn’t we hear you, Dostoevsky, Nabokov, and Solzhenitsyn when you cried out to the heavenly choirs?  What poetry will be left in the world if these atrocities succeed, Turgenev, Mayakovski, and Mandelstam?  And Yevtushenko? What have you to say about this? Help us awaken the great Russian soul, Tolstoy!  You are the people who taught us to love and to feel, to imagine and to hope. Stand up to the dictator! Stand up now! Show us once again how you can lead the world in courage, in imagination, and in hope. Stand up!

The Ukrainians now face the beast alone. But you are not a Ukrainian, and you are silent one more time. Think again, because next the beast will come for you.

Democracy is not a spectator sport. The revolution will not be televised. Stand on your feet and fight together, or die on your knees, the blindfolds on, hands tied behind our backs. Live free or die.

Today we all Ukrainians. We sit on the precipice, ready to be pushed over. Or machine gunned. Or fire-bombed. The air-raid sirens blare. The beast is back.

The people of Ukraine have taken up arms. They defend themselves, one another, and their homeland. They fight for Ukraine, but they also fight for all of us, for all human-kind.

It is clear and cold in Kyiv, but snow is expected. Cold and snowy in Odessa with a wintery mix. Cloudy in Donetsk, 40 degrees but snowing there was well — the temperature will not go below freezing so the snow won’t stick. Somewhat colder in Lviv. There will be a little snow in Lviv soon, but just a dusting.

The Russian tanks, their armored personnel carriers, their jets, and their bombs move into the country in long columns. They surround cities and fire missiles at the city hall.

The monument still stands at Babi Yar. They bombed it and killed five people, a family of five who had gone there with flowers, to remember.

We watch on cellphones and computer terminals. In distant cities where no bombs fall, waiting for some news.  It is not spring yet in the northern hemisphere. The ponds are still frozen. Overwintering birds — blue-jays and cardinals are blue and red against the snow. They skitter in the boxwoods and thistles, feeding themselves on seedpods and husks from last summer, now brittle and brown. The air doesn’t smell of Cordite or diesel fumes. Oil trucks drive on the street, delivering oil. Heating oil trucks, not the olive-colored or camouflaged military trucks that come to refuel tanks and armored personnel carriers. No jets screaming in the grey sky. No dogfights over our heads, no low-flying planes strafing the roads and highways, no carpet bombing of the little plaza where the IGA and Walgreens sits next to the Chinese restaurant, across the street from Cindy’s Diner, its brilliant neon sign pink, yellow, and blue, facing west, lit up when night falls.

A yellow snowdrop pushed through the snow next to a south-facing wall. The lime green shoots of the daffodils are emerging from the dark earth in the patches where the snow has melted.

Now is the time for all good people to come to the aid of their neighbors.

To bigotry no sanction.

To persecution no assistance.

To tyranny no oxygen.

We are all Ukrainians, or soon will be. Stand up now!

Let us rise up together, as people of this earth, flood into the Ukraine and together repulse this tyrant, this Pharoah, this madman, this Hitler, this beast — so love and justice can flow again like the mightiest of rivers, so peace will spread once more over the earth, as waters fill the oceans.

Until the tarantula comes out of its spider-hole again, when we’ll rise once more.

In every generation the beast comes to destroy us.

In every generation we must stand up together again.

All of Michael Fine’s stories and books are available on MichaelFineMD.com or by clicking here.