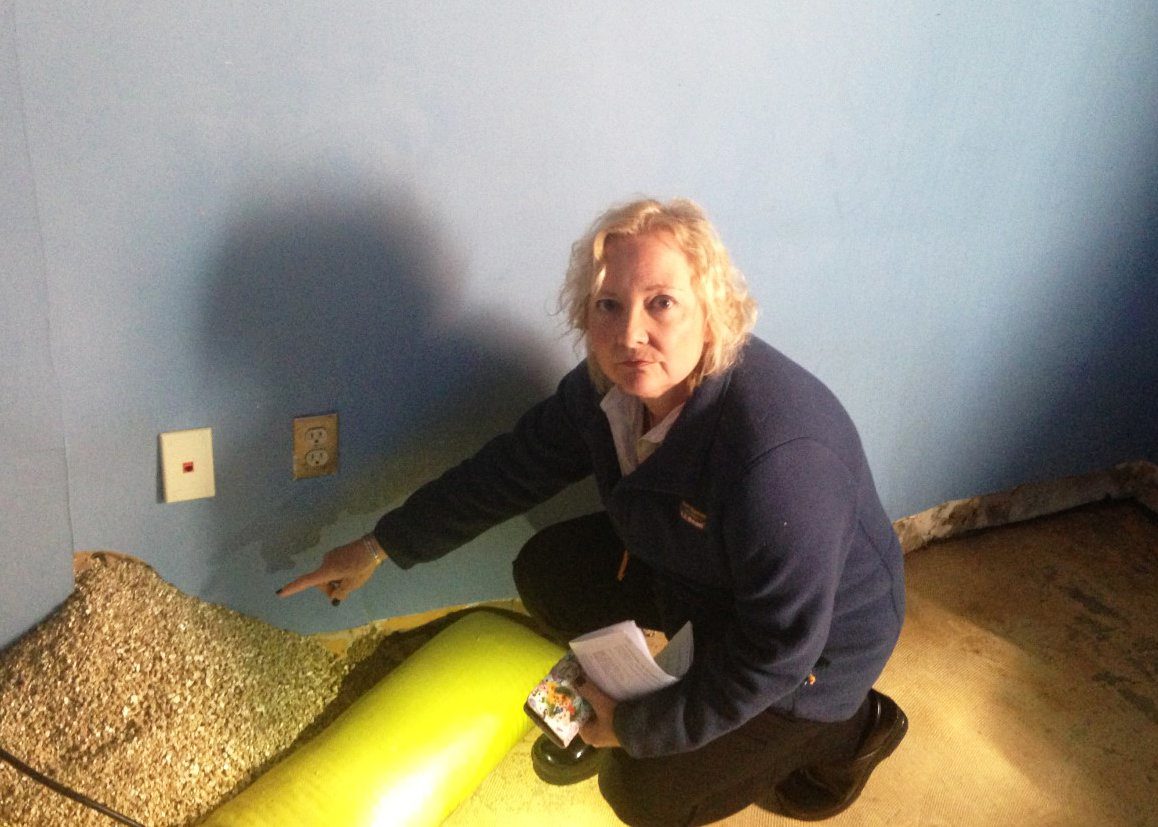 Photo: Karen Rathbun, vice president of administrative services at Community Care Alliance in Woonsocket, points to a hole in the wall with insulation pouring out, caused by water damage from a leak in the roof identified in 2017 but never repaired by the state, leading to unhealthy conditions, including black mold, forcing the agency to move to temporary offices.

Last year, in early March of 2020, ConvergenceRI wrote a story detailing the neglect of a state-owned building at 181 Cumberland St. in Woonsocket, where the failure to repair a leaking roof had forced the Community Care Alliance, an agency serving on the front lines of community mental health services in Woonsocket, to abandon its headquarters, save for a kitchen located in the basement. [See link below to the ConvergenceRI story, “Is the state guilty of neglect with its community assets in Woonsocket?”]

As ConvergenceRI had reported at the time, the building was “a victim of apparent state neglect by the state division of Capital Asset Management and Maintenance, which [had] failed since 2017, when damage from rainwater pouring through a leak in the roof was first reported to them, [had failed] to make any effort to repair the building.”

“The citizens of Woonsocket have been abandoned, particularly the most vulnerable kids and families,” said Mary Turillo, the director of Behavioral Health Services for Children and Youth at the Community Care Alliance, when asked what she would tell [former] Gov. Gina Raimondo if she had the opportunity to sit down and talk with the Governor, face-to-face, about what had happened.

“I feel like the state has made Woonsocket particularly invisible around these issues. Like so many things in this state, if it doesn’t happen in Providence, it doesn’t happen,” Turillo said.

The ConvergenceRI story had continued: The problem was not just about Community Care Alliance being ignored by the R.I. Department of Administration for three years and being forced to abandon its headquarters, which it had leased for $1 a year since 1981. The message being sent by the state was even more hurtful, according to Turillo and her colleagues: The state did not care about the clients [emphasis added].

The story was published on March 8, 2020, just as the full tumultuous impact of the coronavirus pandemic began to take hold. Since then, the roof has been repaired, but the resulting damage and other items, such as repairing the fire panel, still need to be addressed.

The story has proven to be an eerily prescient tale about what is occurring with the ongoing scandal at Eleanor Slater Hospital: deteriorating state-owned facilities involved with the delivery of behavioral health care to vulnerable patients, after years of neglect, marked by a failure by the state to invest in community-based behavioral health and mental health programs, leading to crisis of care.

“Many people in Regan 4 and in the Adolph Meyer building did not require hospital level/institution for Medical Disease [IMD] services, but the lack of appropriate community-based alternatives necessitates their extended stay,” according to the independent peer review undertaken of Eleanor Slater Hospital that was released on Friday, July 16.

Roots of the crisis
Thanks in large part to the excellent reporting by Providence Journal reporter Kathy Gregg, Rhode Islanders have become witnesses to how vigilant reporting can put pressure on state government to do a better job.

But a big piece of the story has been “missing in action” – how a calculated strategy of disinvestment by the state and the R.I. General Assembly in the community-based infrastructure for mental health and behavioral health during the last decade precipitated the current crisis.

ConvergenceRI recently interviewed Benedict Lessing, Jr., MSW, president and CEO of the Community Care Alliance, to get an updated status report – and an explanation of how the scandal at the R.I. Behavioral Healthcare, Developmental Disabilities, and Hospitals around decrepit conditions at Eleanor Slater Hospital fit into larger context of the Rhode Island’s failure to invest in the community-based mental health and behavioral health infrastructure.

ConvergenceRI: What is the current status of the building at 181Cumberland St. in Woonsocket?
LESSING: Currently, CCA operates a kitchen on the lower level of the site that provides meals for behavioral health group homes and residential sites as well as for the Boys and Girls Club. This is not a profit-making venture and it would be difficult to replicate elsewhere due to revenue impediments. CCA has also enhanced and expanded the refrigeration capacity through grants.

ConvergenceRI: How are the current conditions symptomatic of a larger issue concerning the neglect of state-owned buildings in relation to the delivery to behavioral health services in Rhode Island?
LESSING: This site was one of an array of community-based behavioral health sites across the state that R.I. BHDDH [formerly known as the R.I. Department of Mental Health, Retardation, and Hospitals, or MHRH] invested in to better serve people in the communities in which they lived.

Qualitatively, the care and access were higher quality and there was demonstrably less use of emergency rooms and hospital inpatient services.

Owing to the reality that funding for behavioral health [particularly in communities] has always been sub-standard in comparison to other health care, the state of Rhode Island was deliberate in creating and financially supporting these sites, due to their positive impact on the lives of thousands of people with serious mental illness and a range of behavioral health concerns.

The Eleanor Slater Hospital debacle is simply more evidence that R.I. BHDDH and the state of Rhode Island has lost its strategic vision in supporting the care and dignity of vulnerable populations, particularly where behavioral health and human services in general are concerned.

What was once a robust public-private partnership with community-based providers across Rhode Island and a behavioral health care delivery system viewed as a model to be emulated by other states has deteriorated to a shocking degree.

What has happened at our site in Woonsocket is a tangible symptom of that unraveling.

ConvergenceRI: Are there similar examples of facilities across Rhode Island that you can point to that are in similar need of repair?
LESSING: There are examples in Pawtucket, Warwick, and Newport that I am aware of as well as other sites that formerly provided services for persons with developmental disabilities.

ConvergenceRI: How do the conditions at 181 Cumberland St. reflect an ongoing failure to invest in a longer-term approach to behavioral health needs at the community level?
LESSING: Leadership in multiple previous administrations either did not understand, forgot, or did not care that the solutions to the problems that have evolved at Eleanor Slater are better addressed through investment in community-based behavioral health services.

Rather than strategically investing resources at the community level and partnering with providers that demonstrate innovation, creativity and an ability to address complex situations, the state, in this case R.I. BHDDH, the R.I. Executive Office of Health and Human Services, and the R.I. Department of Administration, have simply been absent.

Our site at 181 Cumberland St. and others across Rhode Island speaks volumes in terms of the state’s withdrawal in supporting our most vulnerable citizens.

ConvergenceRI: How is this related to the current crisis at Eleanor Slater Hospital, i.e., the lack of investment in the upkeep and maintenance of state-owned facilities?
LESSING: The only way Eleanor Slater is resolved long-term is through a robust community-based services system and public-private partnerships.

At a minimum, two years ago, R.I. BHDDH should have been working with community providers to create solutions. Abandoning yet another facility rather than exploring alternative models; by not remediating life-safety concerns; by not addressing sub-standard reimbursement rates community providers have had to deal with, which makes it difficult to retain staff; and by not attending to the capital and maintenance needs in residential treatment programs – all of these issues and more have contributed to the current situation at Eleanor Slater Hospital.

ConvergenceRI: What would be the best outcome you would like to see for 181 Cumberland St. building?
LESSING: The better outcome would be for the state to honor its obligation in restoring the site at 181 Cumberland St., re-establishing a lease arrangement and, then in the future, working with CCA to fully assume responsibility for maintenance and perhaps eventual ownership.

There are thousands of [hard-working] staff across community-based human service organizations in Rhode Island that serve children and families, adults, and a multitude of vulnerable populations. They have sacrificed throughout the COVID pandemic and they have witnessed the continuing disinvestment in human services within local communities.

They have had it – and they vote. Again, our site is a tangible reminder of the state’s commitment or lack thereof.

ConvergenceRI: Who should be listened to and heard as an expert when it comes to behavioral health in Rhode Island? Should the state and the Rhode Island Foundation be relying less on what private consultants say and more on Rhode Island-based community experts to identify what is needed?
LESSING: The last six years in particular have been catastrophic in terms of the state’s reliance on consultants as opposed to the experience and expertise of community-based providers.

We have spent millions of dollars for consultants to tell us what challenges we have known about for years – and at times formulate faulty solutions.

Moreover, much of this information has been around for years and simply repackaged; a great deal of it came directly from providers doing the work. The rise of consultants in Rhode Island has played a significant role in eroding the public-private partnerships that had created a model system of care.

ConvergenceRI: Have you been able to discuss your plans with Gov. Dan McKee? What has been his response?
LESSING I have had conversations with officials from the McKee administration but not with the Governor directly on this matter.

ConvergenceRI: How does the story about the failure by the state of Rhode Island to maintain and fix the state-owned building at 181 Cumberland St. fit into the broader context about what needs to be done around behavioral health care?
LESSING: Simply put, this site is a small component of the state’s behavioral health infrastructure. It provides an important resource in a community with economic challenges, a community with significant levels of mental illness as well as multi-generational trauma and substance use. Why would you not want to support with this type of resource a community such as Woonsocket and surrounding communities?

I frankly believe that Eleanor Slater is the tip of the iceberg, and that any current or future Administration and the R.I General Assembly will ignore behavioral health and other human needs at the risk of their political futures. There are solutions that are far better for the populations we serve and cheaper. It is time for us to get smarter.