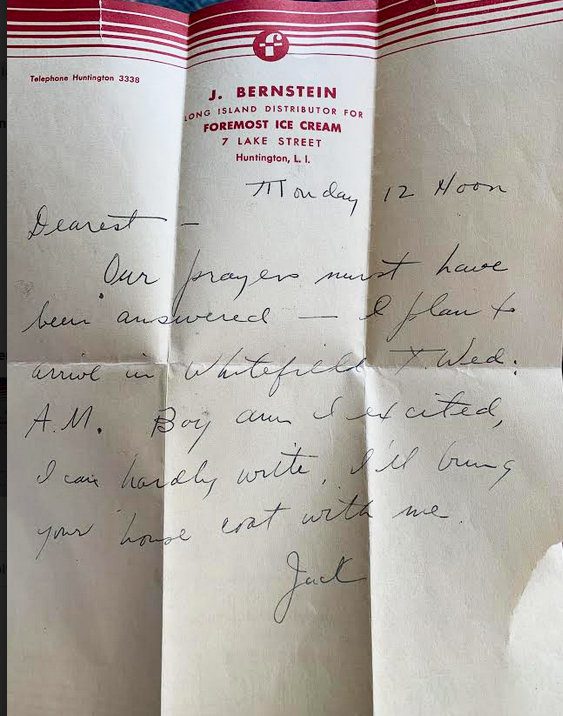 More than nostalgia – by Toby Simon

with Richard Asinof, ConvergenceRI – with feature submission by Toby Simon

Like millions of other retired people, I have been spending my days at home during the pandemic, trying my best to stay healthy and keep sane. Daily walks and hikes help.

As the colder months set in and I found myself indoors for more hours each day, I decided to finally tackle some of the boxes in our basement: boxes that have been down there for a long time, in a complete state of disarray, and with contents spanning from 1928 to the present.

Of course I found remnants of my kids’ notes slid under our door at night, letters from camp, their school report cards, college application essays and various autobiographies they had written as kids. I got lost in the minutiae, wondering where did the time go.

I came across a postcard our son Aaron had written just before his 12th birthday, dated July 1985. He was at overnight camp in Maine for a month and we were in France. My mother was taking care of our youngest child. Aaron was having an absolutely fabulous time at camp and was truly blissful – the camp was practically a spa, so what kid wouldn’t love it?

Dear Grandma,
I’m thinking of you. I have one question. Can you call mom in France
and ask if I can stay another month? When you hear a comment, call back!

There were postcards and letters dated February 1928, written to my mother by her father.

My grandparents were on vacation and had left my mother, age 12, and her sisters, ages 10 and 8 home, with an aunt. Some of my grandfather’s letters were addressed to all three daughters, but he sent postcards to each daughter. Mostly he commented about the weather and how nice it was to walk around without a “hat and overcoat.”

Each of these postcards and letters also carried a very special message to his daughters. At the bottom of the postcard, after the “my love to you and lots of xxxxx, Dad” was a little box. Inside the box he wrote: “Don’t fight.”

Closure
The basement boxes also provided some closure for me regarding my father. He died just after his 39th birthday of a heart attack. I was 8, my younger brother was 3 and my older brother was 11. Since I didn’t remember him much, I relied on my mother’s telling of the story of Jack: his likes and dislikes, his sense of humor, his temperament and their joyous and love-filled marriage.

I accepted all of what she had to say but as I got older, I sometimes wondered if my mother embellished their relationship for her own need as well as in her effort to help us cope with his premature death.

One of the relics that I came across was an old movie clip from 1953, two years before his death. I had never seen this before, my brother just sent it to me.

Our family was celebrating Passover. This home movie began, like millions of home movies at the time, with my mother holding a small blackboard that said “Passover March 1953.”

At the end of the short clip, my father and mother were seated at the table, my older brother and I standing behind them, beaming. We’re all smiling and then my father moved in for a long, sweet and passionate kiss planted firmly on my mother’s lips.

Proof to me, at age 73, that theirs was a very loving and way too short marriage.

More proof
I found more proof. There was a letter dated August 1940 that my father had written to my mother about two months before they got married. At the time, my mother was with her family in Whitefield, New Hampshire.

Our prayers must have been answered —I plan to arrive in Whitefield
Wednesday morning. Boy am I excited, I can hardly write. I’ll bring your
house coat with me.

Hmmmm. House coat? My mother saved this letter in her belongings, all those years.

Silver linings playbook, in a pandemic
For those of us who have not lost a family member or loved one to COVID, there have been silver linings with this pandemic.

Piecing together some specific holes in my family history has filled many a day. And there are gaps in my own story, of what life looked like almost 60 years ago while I was in college.

I found a gadzillion aerograms. Remember them? Back in the day, that was the most common way to send letters to and from abroad. My mother and I had saved every letter we wrote to each other when I was living in France during my junior year. Reading these correspondences brought a flood of memories from  that year abroad, one that provided  growth, travel and transformation.

Once I’m done perusing the boxes, and as I wait patiently for the COVID vaccine, I will put all the letters, newspaper articles and notes back neatly in new boxes and store them some place safe for my kids or grandkids.

About loss
This pandemic is about loss. We are all feeling weary, stressed and on edge. We’ve lost so much: the death toll is staggering, we can’t flatten the curve and we still have science deniers who won’t wear masks. We can’t be with our grandkids, which is unbearable. Our good years left to travel have been cut short by the pandemic.

So, the challenge has been to figure out ways to compensate for these losses, to regain some control over our lives and accept the idea that planning for anything is almost impossible. It’s do-able but it is just hard.

Meanwhile the boxes in the basement have provided some respite. And I’ll take it.

Toby Simon is a frequent contributor to ConvergenceRI.