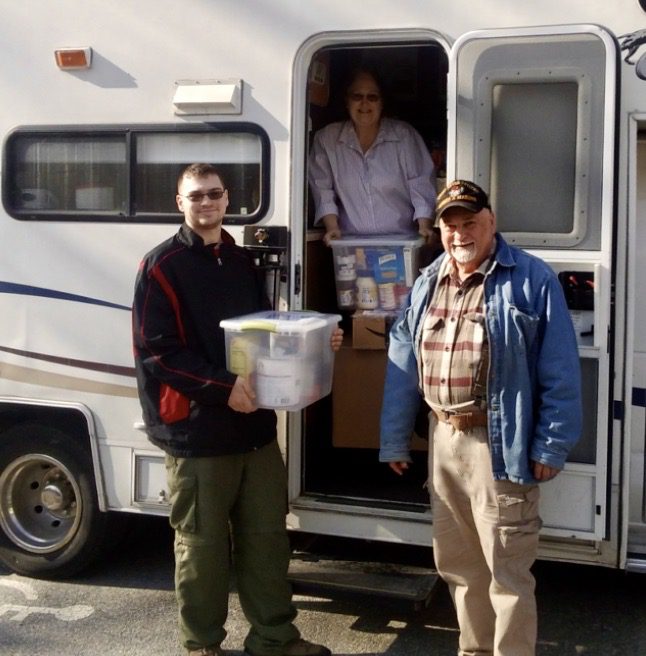 A few days ago, members of Berard-Desjarlais Post 88 started receiving text messages and phones calls from the post Commander Raymond Trinque of another mobilization of post and auxiliary members.

“We have another crisis in immediate need of our support and are looking for volunteers to man the post starting on Tuesday to collect supplies to be donated to Ukraine”, Trinque’s message read.

The mission was simple; open the Berardi-Desjarlais  Post 88, 111 Chapel Street,  Harrisville, RI to become a drop off point in northern Rhode Island to collect for Humanitarian Aid Ukraine and transport all supplies Saturday morning to Cardi’s Furniture in Swansea, Massachusetts on Saturday , March 12, 2022.

The post veterans, auxiliary, and community were once again mobilized to volunteer for what has been called “Operation Ukraine”.

Once again, the veterans, auxiliary, and local community answered the call. Just over a month ago, the veterans were mobilized by the post for the Kentucky tornados’ victims, which resulted in a moving truck of generators, sleeping bags, and other equipment to bandage victims of their brothers’ and sisters’ post in Kentucky.

“We drove by and saw the sign in front of the Post yesterday,’ said Sher. “Assisting and training service dogs, we understand the pain and suffering of Ukraine people”.

Sher and her son train and provide service dogs at no cost to veterans, through a Rhode Island business they founded and operate in Harrisville, Rhode Island, Service Dogs Questions, LLC.

As the cars and trucks arrived at the Post with supplies, the veterans would offload the supplies. The donors were encouraged to come into the Post and sign a Rhode Island flag which would also be included with the shipment from the Post.

“We quickly realized we needed to rent U-Haul trucks because of the volume of donations,” said Trinque.

The Post rented a U-Haul moving truck on Friday and loaded up all the boxes late Friday for the early morning departure on Saturday.

Saturday morning mission accomplished, as the veterans arrived at Cardi’s Furniture in Swansea with the truck full of donated items.

“Mission accomplished,” said D’Andrea, “our efforts are a team effort of  community and veterans answering the call.”

“Thank everyone for their outpouring of support – once again, “ said Trinque.