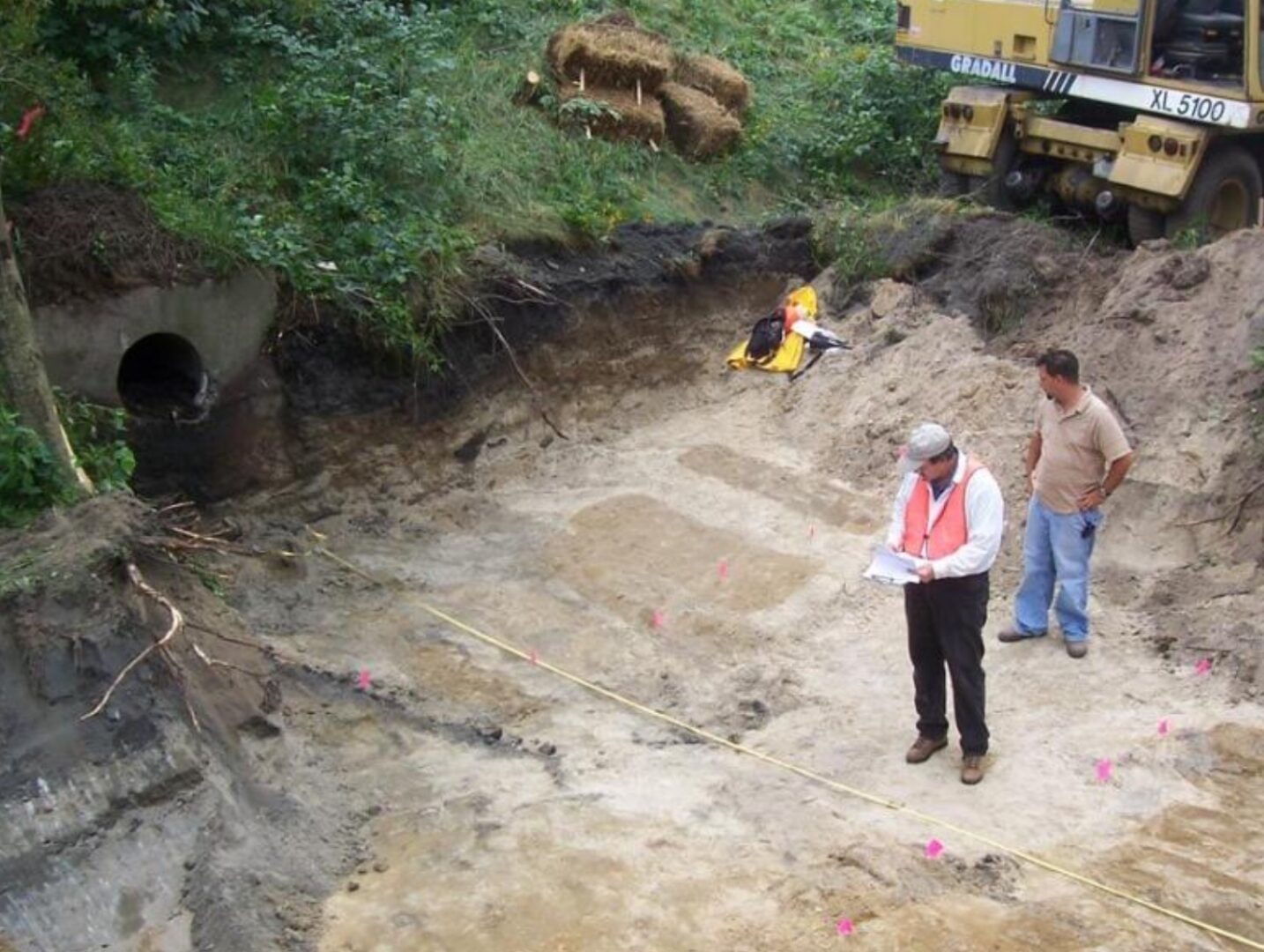 “Lying down in green pastures”… until COSTCO would move them

A detail in the plan to build a big box COSTCO at Cranston’s Mulligan’s Island site is the moving of bodies. Graves. Historic graves over 135 years old. Members of the Congdon family and the Randall family. Buried in a pristine site around a tree right in the middle of the proposed site. Land that used to be The Congdon Farm.

It’s just one of the sticking points that makes locating the COSTCO building where they want to go, inappropriate, at the least, and others are making their feelings known about it.

The COSTCO developer, Coastal Properties LLC, has presented renderings with a notation of where the graves are – and where they would be relocated to. On the map it refers incorrectly to moving the “centenary”. Where the cemetery is now would place it somewhere in the refrigerated foods aisle. The bodies in the historical cemetery would be exhumed and reinterred to another site on to a swatch of land that the developer would give to the city.

According to official Cranston records, “James Arnold visited this lot 23 Aug 1891, vol 1, pg 149, on the farm lately owned by Daniel S Congdon heirs, adjoining the state farm on the west, yard fenced and in good order at present. “two graves at the feet of these are Esek H. Randall and his wife Adeline (congdon) Randall who died a few years since” Located 350 feet west of the end of West Road. It is on new golf course (2001) at end of West Road, south of medium security prison. It is just north of the antena tower.”

The Congdon Farm is pictured here. Located here are the remains of at least 5 Rhode Islanders: (may be others not recorded):

An opinion from the Cranston Cemetery Commission:

As Chairman of the Cranston Historical Cemeteries Commission I am getting back to you as requested concerning the proposed Mulligan’s Island project, as it effects and impacts the status of the historic cemetery at the location.

Thank you for doing your best to keep CHCC informed during the process. After lengthy discussions and extensive research concerning the cemetery at the location, CHCC has voted to oppose moving and/or changing the status of the cemetery in any way.

You should know that no one person on the commission has the authority to express the position of CHCC without a vote by all members of the commission. Therefore by vote it is the collective majority decision of CHCC to oppose moving the cemetery, because CHCC Commissioners believe the history of the cemetery must remain intact as is for the future.”

Cranston has its share of historical cemeteries – you might even see them in neighborhoods, in between or behind houses. It was common for people to be buried on their property that was maintained as farms. Also, Cranston buried individuals from the “poor house” right in this area, sometimes in mass grave areas.

In the early 2000s, construction of Route 37 and part of Chapel View uncovered a grave problem with historic graves. As the Cranston Herald reported, “Every day, more than 35,000 cars drive over Route 37 and many drivers do not realize they are driving over more than 3,000 graves that were never moved during the construction of the highway in the 1960s. Approximately 557 remains were found last year from a 1975 reburial of 577 individuals in a mass grave at the east end of the cemetery. Granite tablets now mark the spot of both portions of the cemetery. Unlike the 1975 excavation work, the work last week was conducted by experts working under more stringent and sensitive laws and guidelines that exist today due to the RI Historic Cemeteries Act of 1992. A cemetery delineation was done in order for the new reburials to be placed in a proper location. Why the 1975 remains were put into a mass grave and why, when they built Route 37, they move the markers and not the remains will perhaps remain a mystery. Records indicate at least 3,025 burials still exist under Route 37 and a proposal is in place to rename Route 37 as the “Potters Field Memorial Highway” to further memorialize the lost and forgotten that lie beneath.”

From the RI Advisory Commission on Historical Cemeteries:

It appears that Cranston historical cemetery number 058, the Thomas Congdon Lot, currently lies under where the building would be. It has been suggested that the cemetery be moved to make way for the Costco
building. RI State law 23-18 spells out what is considered a cemetery, which is as follows:
5) “Historic cemetery” means any tract of land which has been for more than one hundred (100) years used as a burial place, whether or not marked with an historic marker, including but not limited to, ancient burial places known or suspected to contain the remains of one or more American Indians.CR58 contains 8 burials from the 1840s through the 1880s. .

The law further goes on to state that there shall be no ground disturbance within 25 feet of an historical cemetery. The gentleman who spoke repeatedly stated that it was only one family, but there two, those of the Congdon and Randall families. One burial constitutes a cemetery. There are at least eight folks buried in this lot. This gentleman also may also be aware that RI contains approximately 3200 historical cemeteries, most of which contain the remains of families as was customary for folks to be buried on their own land. These folks were buried when this land was their farmland.

It was also mentioned that often cemeteries are moved for development. This does not routinely happen in R.I. The RI state laws also address this situation as follows:

(a) The city or town council of any municipality may by ordinance prescribe standards regulating any construction or excavation in the city or town, when those standards are reasonably necessary to prevent deterioration of or damage to any cemetery or burial ground, or to any structures or gravesites located in any cemetery or burial ground. The rules and regulations shall not apply to the ordinary installation of gravesites or of monuments, markers, or mausoleums. (b) No city or town shall permit construction, excavation or other ground disturbing activity within twenty-five feet (25′) of a recorded historic cemetery except in compliance with the following provisions:
(1) The boundaries of the cemetery are adequately documented and there is no reason to believe additional graves exist outside the recorded cemetery and the proposed construction or excavation activity will not damage or destructively alter the historic cemetery through erosion, flooding, filling, or encroachment; or (2) The proposed construction or excavation activity has been reviewed and approved by the city or town in accordance with § 23-18-11.1. (c) Whenever an unmarked cemetery or human skeletal material is inadvertently located during any construction, excavation, or other ground disturbing activity, including archaeological excavation, the building official of the city or town where the unmarked cemetery or human skeletal material is located shall be immediately notified. The building official shall, in turn, notify the state medical examiner and the Rhode Island historical preservation and heritage commission if the grave, cemetery, or skeletal material appears to be historic. Prior to the
continuation of any further construction, excavation, or other ground disturbing activity, and unless the provisions of § 23-18-7 shall apply, the property owner shall undertake an archaeological investigation to determine the boundaries of the unmarked cemetery and shall so inform the building official. In the event that the cemetery meets the criteria for a historic cemetery, the building official shall so advise the recorder of deeds of the city or town who shall record and register the cemetery in accordance with the provisions of § 23-18-10.1.

If the footprint of the Costco building can not be changed, as would be ideal,
and if City of Cranston chooses to allow the relocation of this cemetery, we would suggest that it be kept in as close proximity to it’s current location rather then moving it to another part of the city, and kept near their historically correct family land. If they were to be removed to where it was suggested, where again, the burials are specific folk associated with a specific area. That would also provide that PAL find available spots in this cemetery, as no headstone does not mean space available.”

Observant shoppers and diners to Chapel View will notice the little gravesite between Staples and Chapel Grille. Mr. Carpionato’s construction projects somehow worked around the cemetery without disturbing it – unlike the historic copper beech trees that were all taken down to make room for a development – that’s a story that comes up continually among people who have lived in the area for a few decades – how they were instructed not to remove them, and one night they were removed, except for one 70-plus-foot-high Copper Beech tree next to where Starbucks is now.

Prior to this November election, RINewsToday surveyed all candidates running for City Council and Mayor. With the exception of one candidate who felt he didn’t know enough about the proposal, it was unanimous that Mulligan’s Island was the wrong location – but that the city was eager to work with COSTCO to find the right location.

A new group called Cranston Neighbors for Smart Development has reconstituted itself from the group that prevented BJ’s Warehouse from going on to part of the land just before Mulligan’s was approved. They’ve dialogued with other neighborhood groups including the Garden City Alliance, to inform home owners about the project as it impacts traffic patterns for the larger Cranston area as well.

Notably, as the neighbors have expressed deep concern about traffic coming on and off Route 37 (new ramp or not) and the Pontiac Avenue exit off of Route 95 prior to this. Their concern arose over the TopGolf development, with shovels in the ground expected in February of 2021. Since that time the defunct “behind-Shaws” location for a COSTCO became alive again with the new Mulligan’s site in mind. And the latest challenge to the traffic issues are two proposed medical marijuana sites to be off of Pontiac (near Aldi’s & off Kenney Drive). With legislature almost sure to legalize recreational marijuana in the next few years, that would increase the traffic for that area exponentially – all focused in one exit spot from Route 95 – raising even more concern.

There will be a hearing this week, Dec. 2nd. Before the Planning Committee. You can tune in by going to the city’s website and following the link.

For More Information on the project:

Information on the hearing on Tuesday:

If you wish to participate, join the ZOOM meeting directly using the following link: