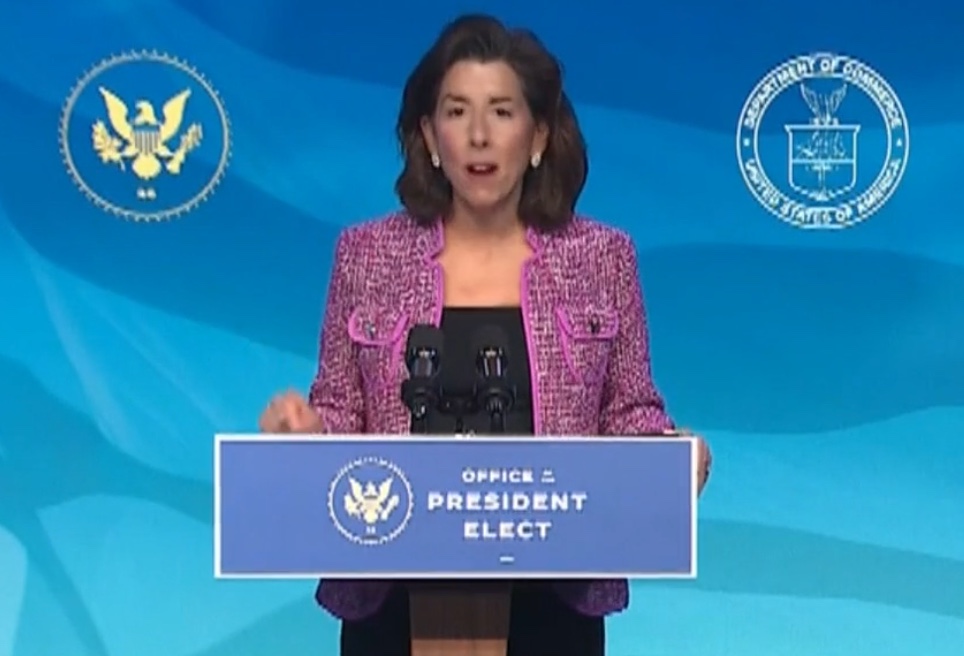 The New York Times was the first to report that President-elect Biden would appoint Governor Gina Raimondo, as Commerce Secretary – a Cabinet level post. But it’s been on the lips of everyone in Rhode Island for weeks. First, it was HHS, but as soon as that opportunity was not realized, Commerce was a natural choice.

Raimondo was presented at a press event on Friday at 2pm, sharing the stage with a few other appointees, including Boston Mayor Marty Walsh, the appointee with the most celebrity recognition.

The Commerce Department is concerned with promoting American businesses and industries; the department states its mission to be “to foster, promote, and develop the foreign and domestic commerce”. The Department of Commerce promotes job creation and economic growth by ensuring fair and reciprocal trade, providing the data necessary to support commerce and constitutional democracy, and fostering innovation by setting standards and conducting foundational research and development. Through our bureaus and 46,608 employees (as of January 31, 2018) located in all 50 states, every U.S. territory, and more than 86 countries, we provide U.S.-based companies and entrepreneurs invaluable tools through programs such as the Decennial Census, the National Weather Service, NOAA Fisheries, and the Foreign Commercial Service. Among many other functions, the Department oversees ocean and coastal navigation, helps negotiate bilateral trade agreements, and enforces laws that ensure a level playing field for American businesses and workers.

The current commerce secretary is Wilbur Ross, who was nominated by President Donald Trump and approved by the Senate in February of 2017.

Lieutenant Governor Dan McKee will step up to fill the position, after Raimondo is confirmed. There are several candidates for Lt. Governor, but at this time the front-runner is recently term-limited Mayor of Central Falls, James Diossa.

Chart of Organization of the Commerce Department

“Governor Raimondo and I spoke yesterday, and I congratulated her on her nomination to serve as Commerce Secretary. It was a productive call, and we discussed the importance of a smooth transition. Crucially, our state’s COVID response will not be impacted. Governor Raimondo and I agreed it is in the best interest of Rhode Island that the team leading our state’s COVID response remains in place throughout the pandemic as we distribute the vaccine and continue Rhode Island’s robust response.Nothing is more important to the success of our state. In the coming days, we will be working closely together to plan a smooth transition that prioritizes the needs of Rhode Islanders. As a lifelong Rhode Islander whose family has owned and operated small businesses in Rhode Island for over one hundred years, I love our state and I’m honored by the opportunity to serve the public as Governor during this critical moment. I thank Governor Raimondo for her leadership and her service to Rhode Island.”

Lt. Governor McKee will be using the weekend to convene with the Governor and her team to ensure he is briefed on the COVID response and other critical department activities. He will also use this time to begin planning the structure of his transition team.