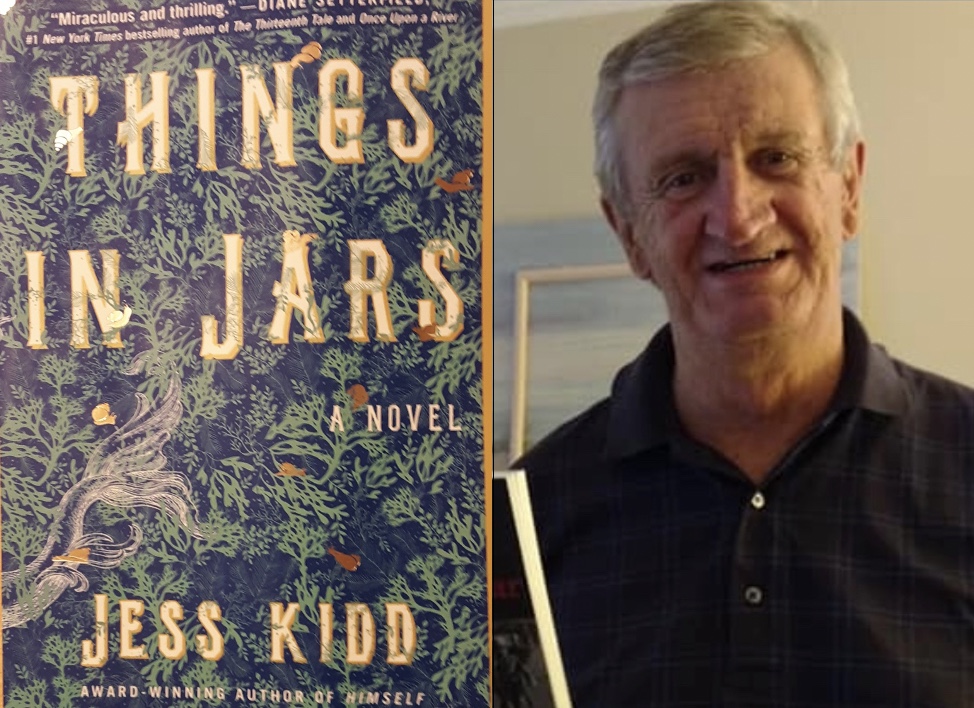 Things in Jars – a book review by Jim Raftus

THINGS IN JARS  by Jess Kidd

Her third novel, Things In Jars, is her most ambitious and complex work. Set in London the action flits back and forth between 1863 and 1841. In 1863 a strange six year old child, Christabel, who lives secluded in her father’s English manor, is kidnapped. During the abduction she bites one of her kidnapper’s hand and he experiences a garish and painful death. Christabel may be a marrow; part human, part mermaid in Irish folklore.

Christabel’s father hires Mrs. Bridie Devine to find his child. Bridie is a self proclaimed Domestic Investigator who specializes in forensic exploration and, quietly, does minor surgery as a sideline. In vocation and attitude Bridie is an early feminist for the Victorian era. She stuffs her smoking pipe with Prudhoe’s Bronchial Balsam Blend tobacco. We are told, “… You add lots of Prudhoe’s Blend for colorful thoughts and triple that amount for no thoughts at all.”

Bridie’s pursuit of the absconded Christabel leads her into the strange world of scientist, actors, rouges, and a vague society of “collectors” who take joy in acquiring oddities of life; animal, plant or even human. Many of these anomalies of nature are preserved and showcased in jars. The cast of characters which also includes a carnival barker, a seven foot tall maid (Cora) and a ghost are fully fleshed out by Kidd’s stunning command of language and fertile imagination.

Chapter 41 begins, “The servants of Albery Hall are having a trying day. Cora Butter has been rounding them up as and when they cross her path – the cook, assorted maids, and a weeping valet have now joined the butler in the cellar. The butler has uncorked several bottles to treat the shock subsequent to being corralled into a windowless dungeon by a seven-foot-tall housemaid armed with a poker.”

Bridie’s near constant companion is Mr. Ruby Doyle a nearly naked phantasmagoric ghost who has tattoos which transform themselves depending upon his mood. He is a mysterious connection to Bridie’s miserable childhood spent as an impoverished helper to a graveyard resurrectionist in the poorest section of London. There are whiffs of a fanciful Dickens in Kidd’s description of Bridie’s early life when she was a waif known as Bridget.

Legends, spirits, murders, mayhem and suspense are brilliantly swirled together by Jess Kidd to produce an intoxicating tale.

Kidd, who is 47 and lives in London, calls her work magic realism. Let’s hope the magic continues with more wondrous works like Things In Jars.