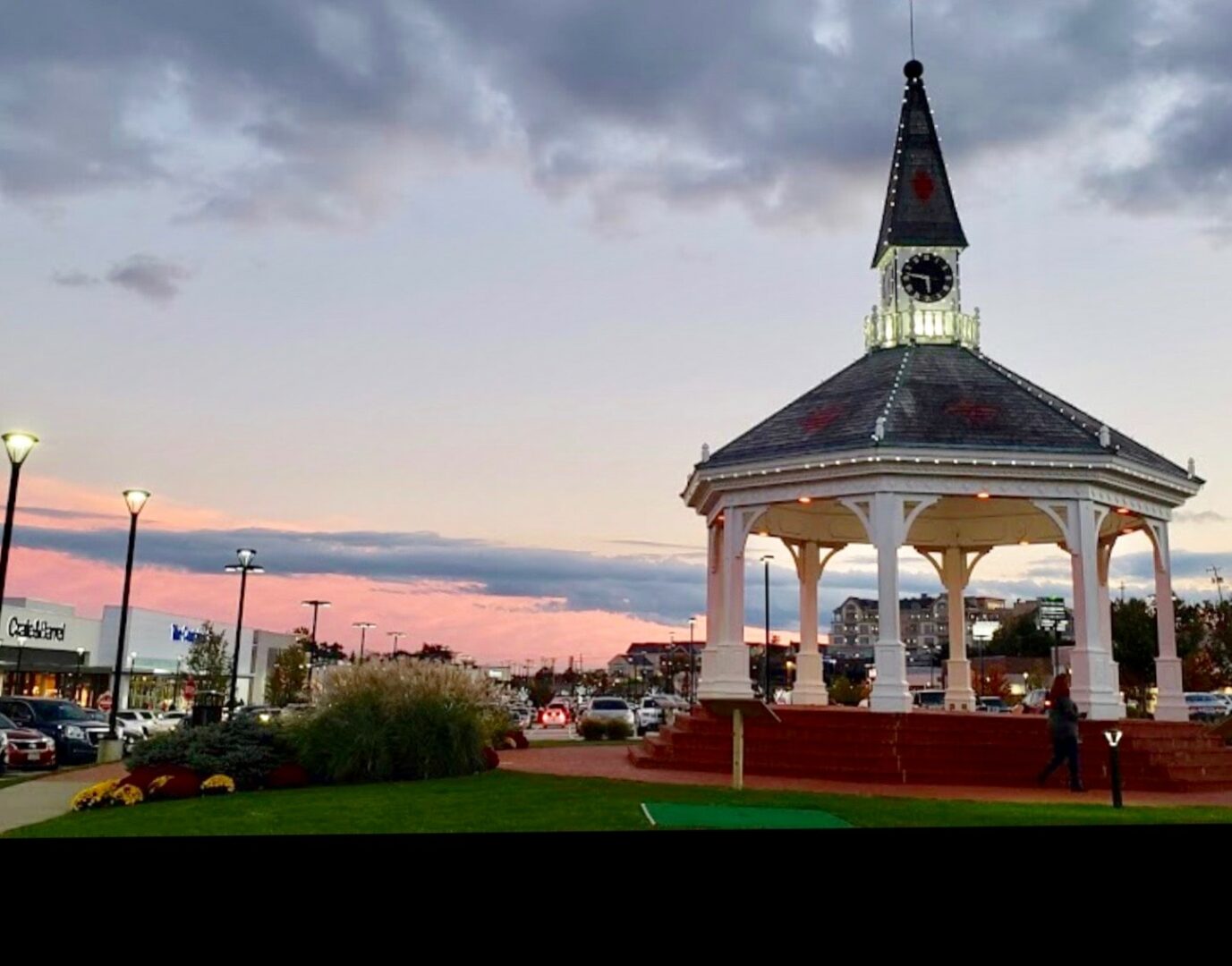 Is Garden City Center For Sale?

Rumors abound. Garden City is for sale. The popular and unique shopping/dining experience destination. The unofficial heart of Cranston.

The success of the Center, managed by the Wilder Co. which carefully chooses the mix of tenants, and with attention to details from landscaping to lighting and music is a shining example of a business development. The Center was shepherded to new life, after it fell victim to a recession and economic upheaval in Rhode Island and the country. The transition has been phenomenal, in keeping with the economic upsurges.

However, with the recent latest stage buildout to include several new eating establishments one after the other, and a new challenge for parking, a common comment, is, “ok, enough, already, it’s done”.

Plans to replace the bank at the top of the hill at Sockanosset and Reservoir when their lease runs out with a boutique hotel have been theorized by the management company, themselves. Plans to somehow put a residential building where the parking area behind the Center on Midway Road is, which would put literally a wall up against the homes on the road behind that, in Garden City, have been talked about. It’s also important to know that Garden City Center extends to the Dunkin’ Donuts Plaza – and on to Whole Foods.

Precisely because there is little space yet to develop in the Center, itself, may be why a sale might be in its future. Over-developed, might be a descriptor used by some who frequent the Center, and/or live in the area. Too many restaurants with a turn-the-table goal, and too few like Avvio Ristorante, where lingering for an elegant meal with friends, and being able to hear the conversations easily, are preferred by those who have time to linger – and money to spend.

It’s still an experience many – judging by traffic alone – delight in, especially at the holidays to spend a leisurely afternoon getting together with friends, have a meal, bring the children to the gazebo, and then for ice cream, and on to some shopping. While traditions like a Christmas parade don’t work in the tight space anymore, celebrating by an “appointment” with Santa in his workshop have become a go-to for the season. Same with the Easter Bunny at Easter time. Decorations, music, all of it. It draws people from near and far to this destination experience.  As far from being called “a shopping mall” as you can get. And it seems to be holding its own against Amazon and the online shoppers, though one can see far more drastic discount and sale signs on sandwich boards and in the windows than in years past.

In a 2017 article by Real Assets, it was noted that trends are changing in response to online buying habits and traditional inside malls. And investors are grabbing on the opportunities. One fund, Asana, is “seeking to capitalize on other demographic, supply and industry factors shaping the retail sector. Chief among these are demand for experiential retail destinations geared to Generation X and Millennial preferences for healthy lifestyles and low environmental impact, and the shift by retail tenants to meet those needs with new, often smaller stores in top-quality locations offering diverse merchandising, food and entertainment options in walkable proximity to each other. Asana says these trends create an “increasing ability of well-located retail to be anchored by non-grocer food, fitness, health, and experiential uses”, tenants that historically have not been seen as retail anchors.” Of course, the anchor of Whole Foods belies the traditional grocery store concept and is desirable by the target audiences.

Just as millennial habits have captured the attention of companies, upcoming Gen Z (now 13-19 years old) seem to love shopping centers. According to Bloomberg Business, “Around 95 percent of them visited a physical shopping center in a three-month period in 2018, as opposed to just 75 percent of millennials and 58 percent of Gen X, according to an International Council of Shopping Centers. And they genuinely like it; three-quarters of them said going to a brick-and-mortar store was a better experience than online.”

Developers need to bounce the ball where it is today – while also anticipating where the ball will be in 5, 10 years.

The rumors of a sale.

When a retail development gets “complete”, the next step is often to sell to a new buyer. The Wilder Co. currently manages the Center which may be owned as an investment of a California based public employees’ retirement system. The owner of Garden City Center is listed as Gateway Woodside Inc. whose address is the same as the Los Angeles County Employees Retirement Assoc (LACERA), described as “an independent governmental entity, separate and distinct from the County, that administers and manages the retirement fund for the County of Los Angeles and outside districts”.

TA Realty’s website notes their involvement in selling Garden City: “TA Realty is marketing a lifestyle center in Rhode Island that is worth about $190 million. The 531,000-sf Garden City Center, in Cranston, is 95% leased, with upscale grocer Whole Foods as its anchor. At the estimated value, a buyer’s initial annual yield would be about 6.5%. Boston-based TA listed the property with Newmark. Sales at the 45,000-sf Whole Foods average over $1,000/sf. The grocer has been at the location since 2007, and…”

NKF Capital Markets successfully completed the sale of Newport Grand in Newport, Rhode Island to Carpionato Group for $10.15 million, in conjunction with Joseph Paolino of Paolino Properties on behalf of Twin River Management Group. They have also orchestrated the $71 million sale of 10 Memorial Blvd in Providence, which is the familiar GTech/IGT building, from the RJ Kelly Company to Tritower Financial Group in January of 2019.

Garden City Center supposedly has 3 investors interested in its purchase.

The question is – will the Carpionato Group – owners of Chapel View, directly across Sockanosset Cross Road, be one of them? What would the future look like for the “heart of Cranston” in ten years if that type of mega-purchase happened? Would Sockanosset Crossroad even exist anymore or would a mega-development of huge proportions take place?

With Carpionato owning and developing so much in Rhode Island right now, their power can’t be underestimated. All the Benny’s properties. Newport Grand. Newport Ave, Pawtucket. Just to name a few. Leases in Chapel View are going for 10-year commitments. Luckily, the Alex and Ani exodus has been nearly replaced by a company involved in wind turbines – but without the retail footprint.

Plans for Carpionato to bring TopGolf to the undeveloped area behind the former Citizens Bank headquarters continue on with a Development Plan Review Committee presentation on Wednesday, November 6th at 9am in the Cranston City Council chambers, where the company will address the “Mixed Use Development (100 Sockanosset & Top Golf) preliminary plan to include reuse of part of the Citizens Bank headquarters for office and retail uses, the new golf entertainment center, and a new building with retail and drive-in restaurant uses.

The promised Traffic Study for the intersection of Sockanosset and Pontiac has not happened, and the RIDOT website does not have it in its active plan, where it once was. The City of Cranston says it is a RIDOT project. Carpionato has done its own traffic “study” which it presented to the Cranston City Council not long ago. A Traffic Study came up in response to the city’s use of “failed intersection” to describe that location. Plans have been acknowledged by Ruggieri Brothers that a portion of their land will be taken to widen the intersection. An additional off ramp from Route 37, with a “pauper’s cemetery” located directly under it having caused big delays in the road’s past construction, shows no sign of construction. The rumors of COSTCO coming for the area behind Shaws, complete with a gas station and liquor store, remain.