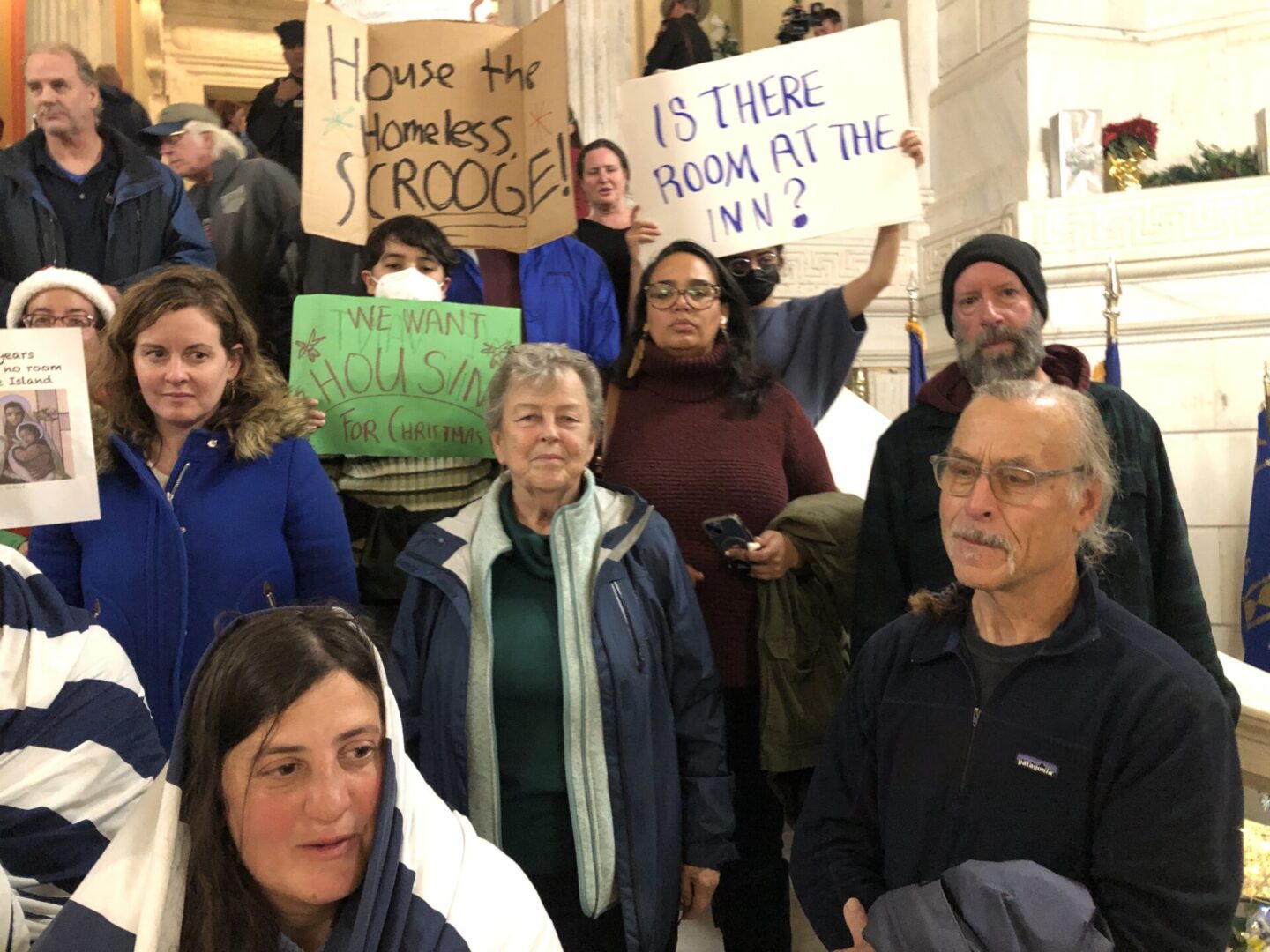 Homeless in Rhode Island – Hodgepodge of Motels, an Armory, a hospital, …

The Governor’s Christmas Tree Lighting happened last night with dozens of homeless Rhode Islanders in attendance. The event happened while 50 mph winds blew tents and people living outdoors. There were some chants and shouts directed toward the Governor that he failed on his promise – to offer housing to all in need by Thanksgiving.

Members of the Governor’s staff participated in offering those living in tents at the State House hot food and invited them into the building for the festivities.

Kim Ahern, Deputy Chief of Staff for the Governor said, “We fell short of our goal,” and noted that recent steps they are taking are designed to relieve the burden on the existing agencies stretched to their limits by the crisis.

Just prior to the lighting event, the Governor announced the Cranston Street Armory would seek approval from fire officials and others to open the ballroom as an emergency shelter to house a maximum of 50, with an open date of “after December 7th”.

The State will open a temporary, 24-hour warming station inside the Cranston Street Armory. This warming station will be open to individuals experiencing homelessness who are living in a place not meant for habitation (e.g. street, car or in an abandoned building).

The vision for this project is to serve as a temporary, low-barrier option that will immediately provide a safe indoor space for some of the most vulnerable people in this population, regardless of shelter or housing availability on any given night. The State expects to begin operating it as soon as possible and keep it open through April 15. It is the result of a cross-agency partnership among the Governor’s Office, Department of Housing, Department of Administration, Department of Business Regulation, Executive Office of Health and Human Services, and others.

Today, the State is sending a letter of intent to providers to further engage them on wraparound services for the site. It is unclear if the Armory will be equipped with beds.

Some of our activities to address the homelessness crisis for approximately 500 individuals on the streets are gaining national attention. Our story about the use of the Armory was picked up by a Chicago-based publication:

A clarification to media and those discussing homelessness, Pallet Shelters are NOT in Rhode Island. There is one demonstration shelter, only, owned by House of Hope. It was thought that there were 20 in a warehouse – this was told to the media by a House of Hope staff member, incorrectly. They cost approximately $8,500 each and would have to be ordered from Oregon. Land has to be identified, leveled, and the area equipped to connect the small shelters to water and heat. Arrangements need to be made for bathrooms and showers and food. House of Hope has the one demonstration pallet and is supportive of them – yet time is of the essence, and this would take an estimated 6-8 weeks to implement. The discussions about where to put them and where not to put them is moot for this year’s crisis. Jaworski accuses communities who do not want shelters in their cities – such as Cranston, which has the state’s largest homeless shelter – as “pollyanna”. House of Hope owns 13 properties in Warwick right now, with wrap around services.

Memorial Hospital was housing 30 families and planned to expand to 60. But a water leak caused Amos House to have to move people to an extended stay hotel in Warwick. Once repairs are made, the plan as of now, is to move them back.

The Motel 6 is housing approximately 40-70 homeless individuals in Warwick. Mayor Picozzi spoke in support and noted that this is a far different location than the botched NYLO system of last year.

Earlier this year Pawtucket Housing told RINewsToday that it has offered it up as an emergency, temporary solution to the state due to the immediate crisis for shelter, and that the state “has not responded to our offer”. Statement from Paula McFarland Pawtucket Housing: “Thank you for following up regarding an update on the 1139 Main Street building. The Pawtucket Housing Authority has continued working alongside the City of Pawtucket as we try to provide adequate options for the State to address our homeless population here in the city. As the weather continues to drop, this becomes more and more urgent.

Pawtucket has opened their police headquarters lobby to anyone in need, 24/7, 7 days a week