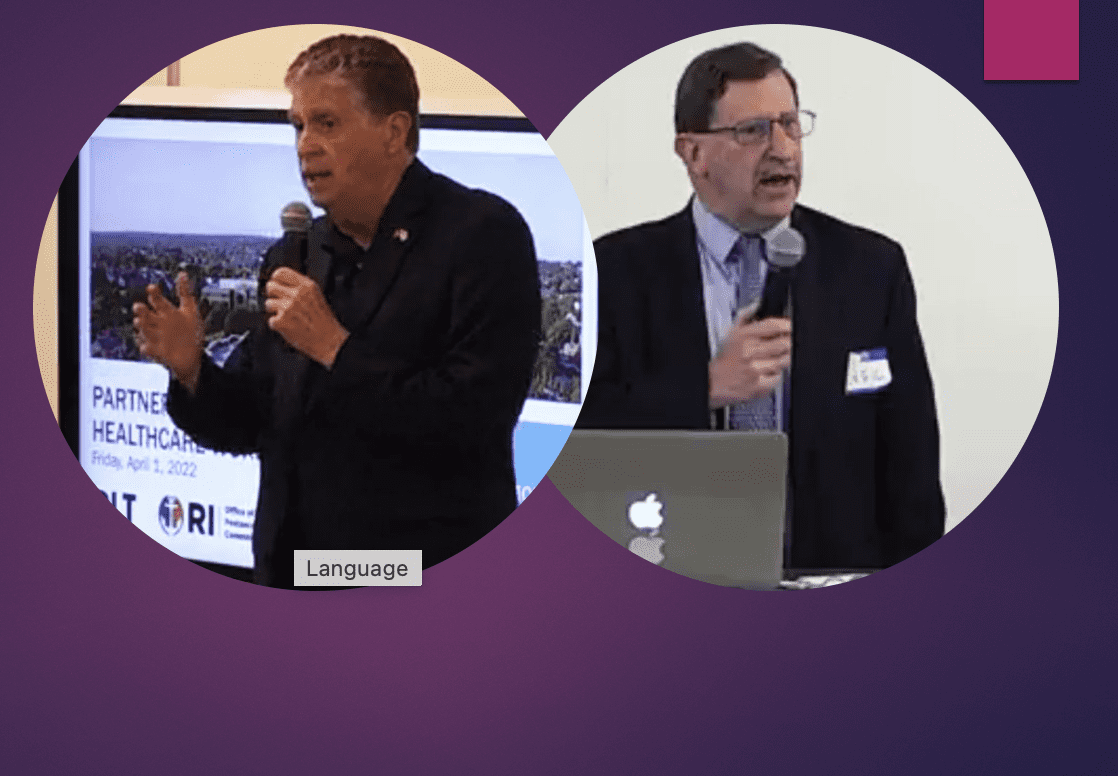 Health Care Workforce Summit – what was said, who attended, who was missing – Richard Asinof

For much of the past week, ConvergenceRI has been trying to slog his way through watching four and a half hours of a taped Facebook Live event, the “Healthcare Workforce Summit,” held on Friday morning, April 1, at the Nursing Education Center at South Street Landing. The gathering was sponsored by the R.I. Office of the Postsecondary Commissioner, in partnership with the R.I. Executive Office of Health and Human Services and the R.I. Department of Labor and Training, with financial support provided by the Rhode Island Foundation.

ConvergenceRI made some correct guesses – and spoke to a number of participants who had attended, off the record. Many others who had been queried were surprised to learn about the summit and that they had not been invited. One labor leader, for instance, said that he knew nothing about the summit – even though two major labor unions were invited. Similar situations had occurred at both a prominent trade organization and at a nursing school, where the top boss had received an invite to the summit but had not shared the information about the summit with other top colleagues.

When Neil Steinberg, president and CEO of the Rhode Island Foundation had tweeted during the summit about how “the right people were in the room,” and then praised Gov. Dan McKee for his “positive attitude,” it provoked a flash of anger. Particularly after being told by Beth Bailey, the press spokeswoman for the R.I. Office of Postsecondary Commisioner, that the sponsorship of the Rhode Island Foundation involved paying for breakfast and lunch. It made being excluded from participation in the conversation that much harder to swallow.

The question was: How was it possible to proclaim that “the right people were in the room” if the news media was excluded from the event? Without an attendance list, how could you reach such a conclusion?

Who was in attendance?
Not everyone was properly identified in the Facebook live presentation, and the transcription service used was not necessarily accurate. Gov. Dan McKee, for instance, was translated as “Gov. Pam Keith” on the screen. Chalk it up to the perils of machine learning and AI.

Here is a partial list, garnered from watching the nearly five-hour summit and reading the name cards of the participants when possible:

• Neil Steinberg, president and CEO of the Rhode Island Foundation.

• Elena Nicollella, the current president and CEO of the Rhode Island Health Center Association, and a member of the Senate legislative commission looking at the future organization of R.I. EOHHS.

• Tina Spears, executive director of the Community Provider Network of Rhode Island, and a member of the Senate legislative commission looking at the future organization of R.I. EOHHS.

In total, the named participants represented approximately 25 percent of the people who attended the summit, but the group captures the flaovr of who was represented, as best ConvergenceRI could determine. One missing participant, who was invited but did not apparently attend, was Peter Marino, president and CEO of Neighborhood Health Plan of Rhode Island.

What was said
Here is a brief collection of comments made during the nearly five-hour summit that stood out when ConvergenceRI watched the Facebook Live recording. [Editor’s Note: If the quotes appear to be choppy in their content,  they are; it was difficult to capture what was being said, because the audio quality was often poor, and the real-time transcription inaccurate.]

Lynn Blais talking about the labor market in health care: “I have grave concerns about where we are and where we are going.”

Marianne Raimondo, talking about the fate of students entering the workforce: “They get hired, and then we throw them to the wolves, with heavy case load, and a lack of supervision and mentoring. They don’t have leaders that they can talk to.”

Sandra Powell, talking about the need to expand the vision of the workforce to older adults: “We need to look at adult learners who enter the workforce.”

Marti Rosenberg, talking about missing information about the workforce: “What data are we missing?”

Elizabeth Roberts, talking about the need to move forward with the new public-private group being proposed to work on workforce issues: “We need to create a planning council where we have a place to engage, a place to bring us together.” Roberts added that “bureaucratic recovery, it’s a path.”

Neil Steinberg, talking about outcomes from the summit: “We need to present the top ten bullet points and present them to legislative leaders.”

Tina Spears, talking about the underlying issues with workforce development – and the desire by workers to have a fulfilling life. “We need to create the pathways to a living wage; without a pathway to a living wage, workers will leave our state. Having the hard conversation about wages is paramount if we get the opportunity to keep [workers here in Rhode Island].”

Laurie-Marie Pisciotta, talking about the connection to the need to raise Medicaid reimbursement rates and to look not just at costs but at longer-term savings: “Our leaders need to invest in Medicaid reimbursement rates. It is not about costs; it is about savings down the line. We need to modernize how we look at costs, using dynamic modeling and cost savings, which are more accurate, even if those savings are a year or two down the line.”

Ana Novais, summing up the summit: “We knew, coming in, we had a health care workforce crisis. The pandemic exacerbated it, but it didn’t create it; it highlighted the deep rooted disparities in our health care system and in our society.”

Novais continued: “We have the expertise in this state to come up with solutions. The summit reminded us that we have data needs that are important.”

Further, Novais said: “Seventy percent of the health care workforce is white. We know we have issues of access, we know we need to learn how to train the workforce, and how to retrain the workforce. We need to address the leadership not just in education, but in providing a livable wage that fulfills workers.”

In conclusion, Novais said: “When equity and environment depend on health, we are saying education, employment, health, it requires a collaborative action, our collective commitment and staying power, developing an action plan, challenging our leadership and ourselves to act.”

Under the Radar Screen

All of the events related to the health care workforce summit, with the goal of creating an inter-agency, private-public partnership to create a new, unified health workforce board, occurred far, far under the radar screen. It was a major occurrence that went unreported by the Rhode Island news media, perhaps because there were so many distracting stories in the last two weeks.

At the same time, the selection of a new license plate for Rhode Island drivers, which bears a remarkable resemblance to the old license plate, provided distraction, perhaps, from the ongoing war of terror unleashed against the civilian population of Ukraine by Russia, which has rightly been called war crimes and genocide.

Then there was the Senate confirmation of the first African-American woman, Ketanji Brown Jackson, to become a U.S. Supreme Court Justice. At the same time the Governor announced a transition team to guide R.I. EOHHS in seeking a replacement for Secretary Womazetta Jones, who departs on May 1. Under Gov. McKee, his administration has overseen the departure of two African American women from high-ranking positions in his cabinet. Will voters take notice?

The Governor named Kristin Sousa as the director of the R.I. Medicaid office, during a time of major upheaval – the re-procurement of Managed Care Organization insurance plans to deliver services roughly one-third of all Rhode Islanders. If and when the federal emergency from COVID-19 is lifted, those numbers will be downsized around financial eligibility considerations.