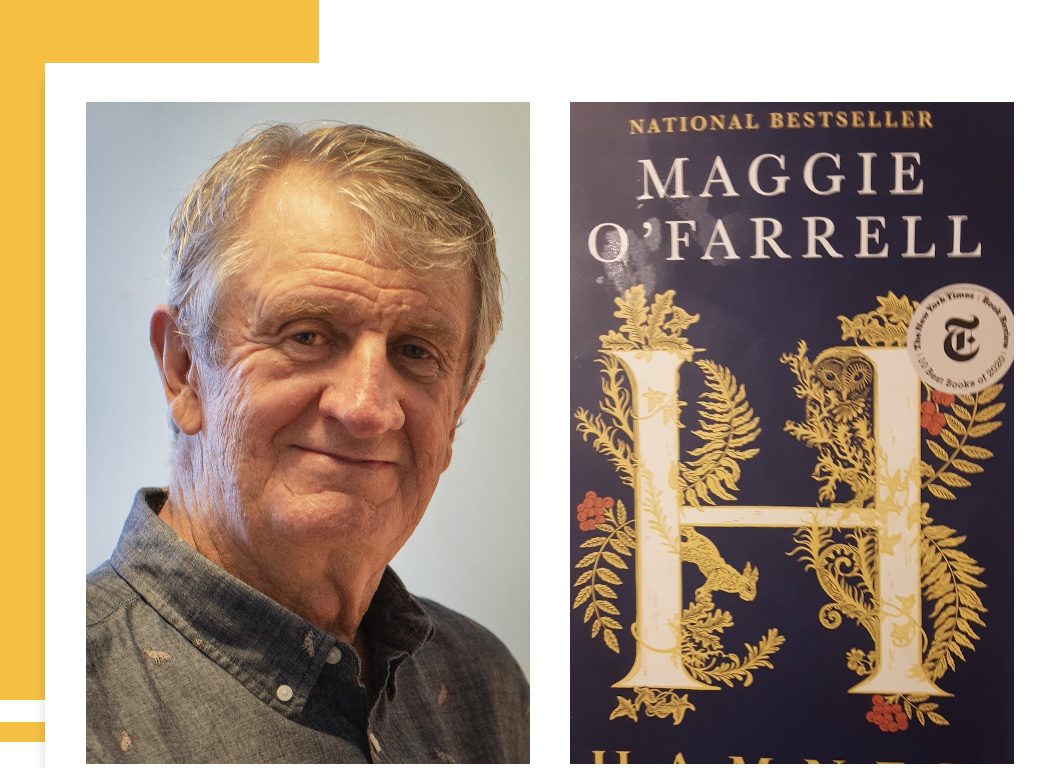 The book’s title is Hamnet, he is the son of William Shakespeare, but make no mistake this is definitely the fictional story of the Bard’s wife, Agnes. (Shakespeare’s wife is widely known as Anne, however her father listed her as Agnes on her death certificate.)

In Hamnet, Maggie O’Farrell’s best-selling new historical fiction, the author creates an amazing, heart wrenching imagining of a woman’s life in Stratford, England in the 1580’s.

O’Farrell boldly places a single page before the beginning of Chapter One:

In the 1580’s, a couple living on Henley Street, Stratford, had three children: Susanna, then Hamnet and Judith, who were twins.

Four years or so later, the father wrote a play called – Hamlet.

O’Farrell has offered this bare-bones synopsis of true events from which she conjures up her fabulous tale. It is noteworthy that she uses the word “father” in this historical note. Not once in this epic novel do the names, Will or Shakespeare, appear! He is referred to in oblique ways; son, brother, father, playwright…etc. It is a clever sleight of hand by O’Farrell to keep the focus on Agnes.

There are two story lines in Hamnet, separated by 15 years of time. It begins near the chronological end of the later tale with the plague striking Agnes’ twins, but often reflects back to the sensuous and dangerous beginning of her courtship, shot gun marriage and the burden she carries running the household while her husband vacillates between working at his father’s glove making company and his nascent attempts at writing.

Readers will be tempted to try and cull fact from fiction in this work. That would be a mistake. It is best absorbed as a brilliant character study of a woman trying to hold together a family and a marriage in the not so bucolic life in 1580’s England.

Agnes is a feral, mystic and earthy woman who grew up in the woodlands. She is shunned by many for her eccentricities, sought out by others for her near miraculous skills with medicinal plants and potions. Fiercely independent, she does however fear her husband’s extremely long and frequent absences from Stratford as he strives for success in the burgeoning London theater scene.
O’Farrell’s amazing descriptive talent is showcased throughout the work, but the most obvious example is the ten-page long chapter chronicling how the disease-ridden flea which ravages the Shakespeare’s family came to their household. This diabolical journey flows from a glassmaker in the Murano section of Venice, through a crew ship sailing into Alexandria, then stopping at Constantinople, finally arriving at a London dock where it is transferred to a seamstress shop in Stratford where Judith Shakespeare is helping out. The author’s rendering of the unlucky happenstances, the dumb, bad luck and serendipity of this journey could be described as comical and lighthearted were it not for the multiple deaths accompanying it.

Cruel death, suffering and grief are ever present in the lives portrayed in Hamnet.
Shakespeare has to grow to maturity before he can fend off the abusive attacks of his father. Shortly after marrying Agnes’ widowed father and becoming her stepmother, Joan takes a kitchen knife and lops off the young girl’s hair declaring she, “…hadn’t the time to be attending to that every day”. Not much parental love went into forming the odd couple who would become Mr. and Mrs. William Shakespeare.

The most difficult to read sections of Hamnet are also the most heartfelt. Agnes’ anger, her futile commitment to curing her child, her denial then anguished acceptance of death are vivid portraits of almost unbearable parental angst.

This is not easy reading. Viewed through the lens of our current pandemic, Agnes’ losses seem even more profound.

Hamnet is O’Farrell’s ninth novel. It is her first historical fiction. It will be of great interest to see where her vast literary skills bring her next.