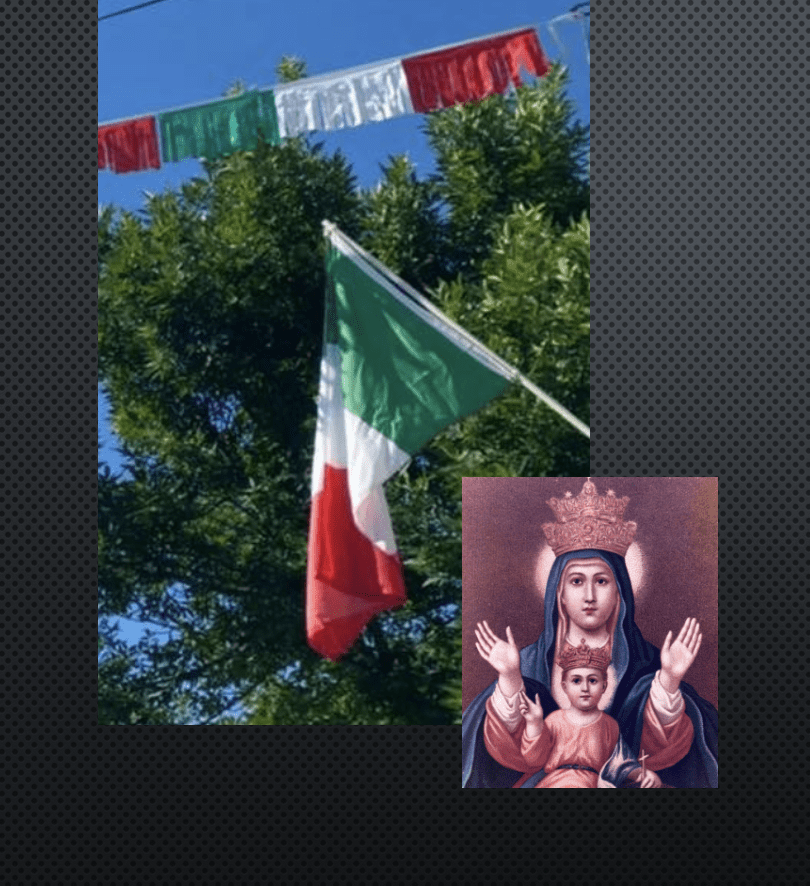 Note: This weekend welcomes St. Mary’s Feast of Madonna Della Civita in Cranston. Until recently, the Feast has always been celebrated on the 21st of July, the author’s birthday and namesake. It seems appropriate to reprint this to provide the history of the Feast on this, her 70th birthday.

One of my favorite childhood bedtime stories was an old Italian legend that I called ‘the miracle story”.

“Once upon a time, in the Civita Hills in Itri, Italy, a deaf-mute cowherd lost one of his cows. He panicked and began to search high and low throughout the hills, only to stumble upon a rather strange sight. He found his cow kneeling at the foot of a great oak tree. The cowherd knelt beside the cow and from that vantage point he noticed a painting nestled in the branches. Upon further inspection he was surprised and pleased to discover that he recognized the woman in the painting – it was the Blessed Mother and she seemed to be smiling at him. And with that smile he immediately regained his hearing and speech. He was so excited that he ran all the way down the Civita Hills to tell all the villagers what had occurred. The date of this miracle was July 21, 796.

The villagers were astounded when they heard the young boy speak and followed him back up the hills to see the painting for themselves. Sure enough, the painting was exactly where the boy had found it. The villagers gently and reverently removed the painting from the oak tree and carried it in procession to the main church in their village of Itri. The next morning, the villagers were astonished to find that the picture was missing from the church. No one admitted to having removed it, so they traveled back up the Civita Hills, and there the painting was in its original location, between the branches of the oak tree. The villagers then understood that Our Lady, the Virgin Mother, wished to be honored in the small place where she had originally appeared. A chapel was then built on the site of the tree and called the Sanctuary of Civita.

In 1527 the plague descended on Itri and killed most of the population. In despair the villagers brought their prayers to the Madonna Della Civita. A large crowd gathered at her sanctuary on July 21 and carried the sacred painting in a procession throughout the villages of the surrounding area, all the while begging the Madonna to free the people from the Black Death. Suddenly a dark cloud was seen emerging from the earth and dissipating into the sky. The plague ended. Ever since then, July 21st is the solemn feast day of the Madonna Della Civita – about half a million pilgrims come each year to this holy place.

In Itri itself, there are 3 days of local festivities and religious processions. The silver statue of the Madonna and Child, both wearing golden crowns adorned with precious stones are carried through the streets of town on a golden throne. The procession concludes at the top of Mount Civita. Villagers celebrate the feast with fresh figs, black licorice root, and fireworks. All businesses and schools close and the villagers run through the streets of Itri to catch a greased pig.

Shortly after World War II, many people left Itri and the hills of Civita, immigrating to America, many to Cranston, Rhode Island. They brought with them their culture and tradition and continued to celebrate the Madonna Della Civita on July 21st of each year. Businesses and schools closed, they chased a grease pig throughout the city of Cranston and created a 600 lb. reproduction of the statue of Maria Santissima Della Civita for the annual procession at St. Mary’s Church.  Since 796, The Madonna continues to provide miracles, beginning with the miracle of the deaf and mute cow herder. It is said that you cannot leave the feast until you have touched the statue of the Blessed Mother, for she will grant your miracles.

The end of the story was my favorite part. “Mary, you were born over a 1,000 years later on the same date that the deaf-mute cowherd found the painting of the Blessed Mary. While the fireworks from the feast of Madonna Della Civita graced the sky in Cranston, Rhode Island, Mommy gave birth to you. Your birth on the day of the feast is a sign, a minor miracle as we gave you the beloved name of ‘Mary’. You are meant for great things.” Eight weeks later I was baptized Mary, with all the pomp and circumstance accorded to a chosen one.

I attended the feast of the Madonna every year, touched the statue and asked for miracles. I also attended Catholic elementary school, where I was chosen to be the “Queen of the May” during the feast of the Blessed Mother. I expected to be treated as the chosen one at school as well, except for a physical anomaly that symbolized demonic possession to the Catholic Church. I was left-handed. It became the nun’s duty to exorcise the demons in me by making me right-handed. I experienced daily beatings with rulers, yardsticks, anything that would result in bloody knuckles, rendering me unable to write with the “devil’s hand”. To ensure this metamorphosis, my left hand was tied behind my back as well. The beatings resulted in a child’s simple conundrum. How can I be the chosen one, born on the feast of the Madonna, given her name, yet beaten daily for my left handedness?

Eventually I morphed into a rebellious child, which resulted in “inappropriate and disrespectful behavior”. I was in the third grade when my name began to appear on the blackboard, included in the daily list of students who had detention. I remember looking at the list one day and noticing that almost every name listed was Mary or John. Suddenly I felt common, ordinary, and unexceptional. I spent an afternoon trying on different spelling variations of my name. I finally settled on “Mari”.

I was pleased with my altered spelling identity and when I saw Mari on the list for detention, I was proud. My new moniker became a symbol of defiance, an alias that, to my family meant I did not value my legacy to the Madonna. They cajoled, yelled, prayed, all in vain. At times I felt like I was faced by an ecumenical council, but I refused to relinquish my restored uniqueness. They, in turn, refused to acknowledge the new spelling and kept it a secret from the family. My grandmother died in her eighties, never knowing about the “I”. Even an imprimatur from the pope wouldn’t have changed their views. I was no longer chosen; I was a sinner.

However, in the hindsight available only in adulthood, is it not the bloody knuckles or my identity crisis that fills me with dread, panic and fear, but the sight of a black limousine. Sociologists might refer to it as a symbol, psychoanalysts as a trigger, behaviorists a stimulus. To me, that black limousine meant only one thing. I would not be taking the bus home, chatting with my friends as we walked to our respective homes. I would not walk into the house welcomed by the smell of garlic browning in oil, or my mom stirring the pasta, the steam circling her as she stood by the stove. No, the limousine was there because my mother was in the hospital.

Whenever my mother was rushed to the hospital, my father would pick us up in the funeral home car and take us to Nana’s house. When I saw the black limousine I was scared, emotionally dislodged, hating the unpredictability of the predictable. However, my classmates were very impressed with this frequent occurrence, and although they teased us about being rich, the envy in their taunts was palpable. I just wanted to shout at them, beg them to stop, because this sleek, black, shiny limousine was not a sign of social status – it was my nemesis.

I loved the bus. The bus meant everything was common, ordinary, and unexceptional. One day I was taking the bus home reveling in the normalcy. When I arrived home, an ambulance was parked in the driveway. It seems the time elements had overlapped, and the limousine driver didn’t have time for proper notification. As I walked up the driveway the attendants were carrying mom out on a stretcher. I attempted to say hello, but she was unresponsive. I stood catatonic as one of the wheels of the stretcher rolled over my foot. I thought… “So, this is the picture I missed while sitting in class, my eyes darting from the clock on the wall to the window, praying the bell would ring at the sight of a fat, yellow, happy bus and not the sleek, shiny black limousine. Perhaps I should have touched the statue more often, prayed for different miracles.” Later my dad told me that this time was serious, and I would have to take care of my brothers.

This would be a long hospital stay and we would not be going to Nana’s house. He said mom was in the hospital and she was receiving a treatment to make her forget about all the things that made her sad and help her to stop crying all the time.

In my childhood mind’s eye, I pictured one of the erasers that the boys had to clap at the end of the school day. Maybe this “treatment” was an eraser that would simply make all the sad things disappear, like the names on the board for detention. And when she came home, she would be happy.  In adulthood I now know the treatment was electric shock therapy, a more advanced method of erasure.

When I was 12, I was old enough to visit my mother. As I entered her room, she looked quizzically at me and said, “What a pretty little girl! What is your name?” I answered “Mari, spelled with an “I”.