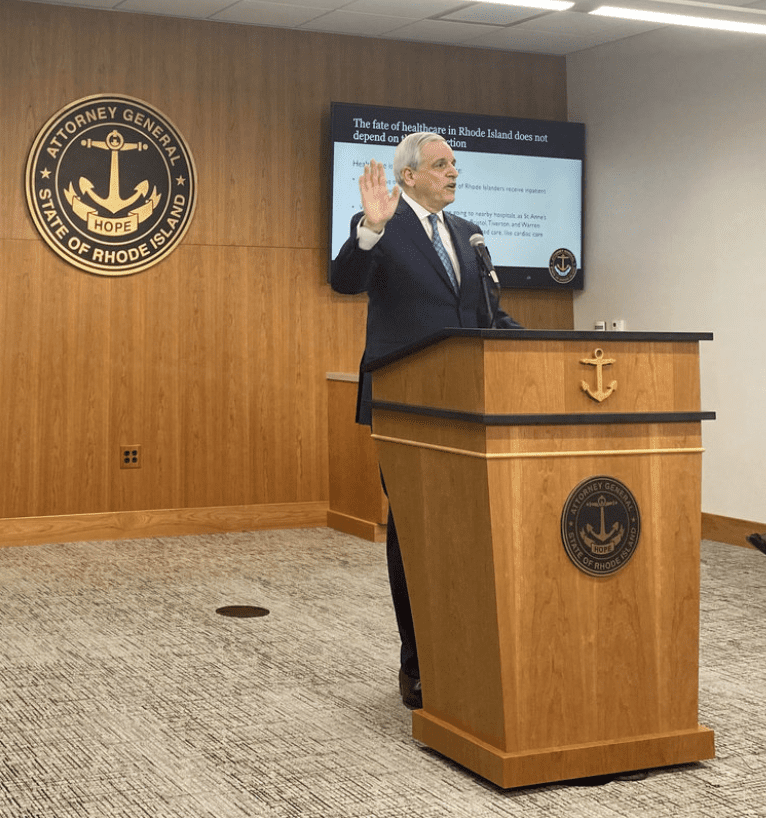 Getting to no… rejecting the Lifespan, Care New England merger application – Richard Asinof

RI Attorney General nixes merger between Care New England, Lifespan, calling them out for failure to produce an integration plan that detailed the costs and benefits of such a merger.

At a hastily called news conference held on Thursday morning, Feb. 17, Attorney General Peter Neronha announced his decision to reject the merger application – as well as his plans to join the Federal Trade Commission in a lawsuit opposing the merger on anti-trust grounds in federal court in Providence.

With members of his legal team seated to his left, [including Civil Division chief Miriam Weizenbaum, Kathryn Sabatini, chief of Policy, Dan Sutton, deputy chief of Policy, and Jessica Rider, the Health Care Advocate], in a public display to recognize their hard work and diligence, Attorney General Neronha spoke for nearly an hour, then briefly answered questions.

He demolished the arguments put forth by proponents of the merger, in convincing fashion, calling bullshit on the failure by Care New England and Lifespan to produce an actual integration plan – only a promise to do so once the merger had been approved.

“The parties had been, frankly, unwilling or unable to describe with any precision how they intended to integrate these two [health] systems and deliver on the benefits they promised,” Attorney General Neronha told the assembled news media. “What they wanted this office to do, under the Hospital Conversions Act, was to make a decision [approving the merger], and let them figure it out later [how they were going to make it work]. That is rubber-stamping a transaction. And, that is something that this office, as long as I am here, will not do.”

Attorney General Neronha shared his great frustration that, after months of requesting an integration plan for the merger – including a personal request he made directly to the Dr. James Fanale, president and CEO of Care New England, and to Dr. Timothy Babineau, president and CEO of Lifespan, what was received was not an integration plan, but a promise to create such a plan sometime in the future in a document known as the Chartis Report. “Just read the first line,” Neronha said, which began: “The parties will develop…”

Neronha voiced his disappointment at what he deemed the lack of response by the two health systems. “What is the plan? What are the costs? Can you pay for it? Because, if I don’t know those things, I can’t weigh it against the potential harms.”

Neronha said he could not approve a transaction if he didn’t know what it is. “I can’t approve a transaction if I don’t know what it is. I can’t approve something if you don’t tell me what the plan is.” Without a detailed plan, Neronha continued, it was difficult to answer the question: Did the combined system have the financial wherewithal to deliver on any promised benefits?

Getting to no
In rejecting the proposed merger of the state’s two largest health systems, Care New England and Lifespan, Neronha argued:

“Compared to everyone else not involved in this transaction, they already have a lot [of beds],” Neronha began. “Look at those bed numbers, they have a ton of beds, they already control the market separately. Who is going to compete with them? Intuitively, you don’t have to be an antitrust expert to understand that. What does it mean for you and your family? It means that you are going to spend more on health care.”

Neronha then addressed the concept of market share. “Let us talk about …market share,” Neronha said. “We are not pulling these numbers out of newspaper articles or from thought leaders. These numbers come out of the research that we did, based on real data that we had available. This is what it showed. That, if this merger [were to be] approved, a single health care system would control:

• 79 percent of the Rhode Island market for inpatient psychiatric care

• About 50 percent of commercial health care spending will be on patients whose primary care physician is part of the merged system’s three Accountable Care Organizations [ACOs] The three ACOs are Integra [Care New England], Coastal Medical [Lifespan]. and the Lifespan Health Alliance [Lifespan[.

“Remember our metric,” Neronha said, which is that market share over 30 percent is presumptively anticompetitive under antitrust law [emphasis added] when determining whether a proposed merger violates antitrust law.

“Thirty percent is the metric. And these are the numbers [for the merged entity combining Care New England and Lifespan in market share] – 75 percent, 80 percent, 79 percent, 60 percent, 50 percent, and 67 percent.

“We analyzed other markets, but that is where almost everybody starts, in the courts and elsewhere, when we are evaluating antitrust. It is the best product market for analyzing antitrust.”

In Connecticut, Neronha continued, “where Yale New Haven [health system] is considered to be the ‘big dog,’ they have 31 percent of the statewide market for inpatient hospital care.”

But wait, there’s more. Utilizing a second metric to show market concentration and market power, known as the HHI Index, to determine whether the merger would violate antitrust law, a review by the experts retained by Attorney General Neronha showed that before the merger, Rhode Island would have had a baseline HHI Index score of approximately 3,315, showing a highly concentrated health care market.

The proposed merger would raise the score by more than 3,100 points, for a total of an overall HHI Index score of 6,499 points, according to Neronha.

Neronha displayed a slide of a bar graph that showed all the cases in the last 18 years where the FTC had sued to block a merger because of antitrust concerns, related to HHI Index increases. “And the Lifespan/Care New England is much higher than any others. So, it shouldn’t come as a surprise to the parties, or anyone else, that this transaction creates a serious antitrust problem,” Neronha said.

• The parties had never provided detailed evidence of having an “integration plan,” detailing the benefits achieved, and how much it would cost – only a promise to develop such a plan once the merger had been approved.

“Don’t give us a set of objectives,” Attorney General Neronha said, expressing his frustration that Care New England and Lifespan had failed to produce an actual integration plan for the proposed merger, despite repeated requests. “Don’t speak in generalities. Don’t give us things that all sound good. Tell us exactly what you are going to do, where you are going to do it, who you are going to affect, and then let us know how you are going to pay for it. Getting answers to those questions proved to be elusive [emphasis added].”

• The merged entity would operate outside the capacity of any effective regulatory umbrella in Rhode Island to control the increasing costs, pegged at a minimum increase of 9 percent by experts.

“I fight with health insurance companies all the time, those of you [in the news media] who follow this office know we are always objecting [to rate increases],” Attorney General Neronha said. “I know, Richard, you follow that [the first of several shout outs to ConvergenceRI during the news conference]. I have no love for the way that insurance companies raise their rates. It’s not personal; I just think they go up way too much.”

Neronha continued: “But when you talk to insurers, they know that their ability to have any leverage in negotiating rates – remember, those rate increases are passed on to all Rhode Islanders. It will be very difficult with an entity with an 80 percent market share.”

All the evidence, the Attorney General argued, pointed to how such a high concentration of market power resulted in higher health care costs. “Across the country, over and over and over again, what studies [have shown], and experts have recognized, that mergers that result in high market concentration, lead to an increase in health care costs. Dr. Pflum, our expert hired to examine Rhode Island data, confirmed what has happened nationally and what will happen here. He concludes that the increased leverage of the new [merged] system could increase prices starting out by at least 9 percent.”

Neronha said further: “We all know that insurers don’t eat those costs [emphasis added]. Insurers pass those costs on to consumers through higher premiums and out-of-pocket costs. Whether you are buying your health care on the individual market, or whether you are a small business or a large one, buying it for your employees, consumers and small businesses and employers are all going to have pay those costs.”

Neronha then debunked the idea that the R.I. Office of the Health Insurance Commissioner and a rate cap placed on hospital rate increases could constrain such a merger entity with so much market power.

“The OHIC Commissioner [Patrick Tigue], for [whom] I have a lot of respect, acknowledges that OHIC rate caps are insufficient to control the anticompetitive nature of this merger,” the Attorney General said. “These are his words: ‘Rate caps are insufficient by themselves to adequately mitigate the risks to affordability resulting from higher prices that could materialize following the proposed merger of CNE and Lifespan.’”

According to Neronha, the OHIC Commissioner then warned about the likelihood of operating in an unregulated environment. “We regulators, like myself, this office, and the Department of Health, should evaluate ‘the likely price effects of the proposed merger of Care New England and Lifespan, assuming an unregulated environment.’”
Neronha asked, rhetorically: “So, what does that tell me?” and answered: “Don’t count on OHIC, and Rhode Islanders shouldn’t count on OHIC, either.”

Neronha then elaborated on the problem with depending on OHIC rate caps in a merged environment. “The problem with relying on OHIC’s rate caps – listen, this is why the commissioner said it, he understands what the limitations are – they could be overridden by the R.I. General Assembly at any time.”

The OHIC rate cap, Neronha continued, “Only applies to inpatient hospital services, they don’t apply to physician groups. They don’t apply to services performed in non-hospital facilities; they don’t apply to ambulatory surgery centers – and, as everyone knows, that is where medicine is going. And, rate caps don’t do anything to help with the other problems, the non-price problems arising from the elimination of competition.”

Editor’s Note: In PART Two, ConvergenceRI will detail Attorney General Peter Neronha’s responses to the problem of “conditions” not being able to solve the antitrust concerns, and the undetermined role that Brown University played in the proposed merger.