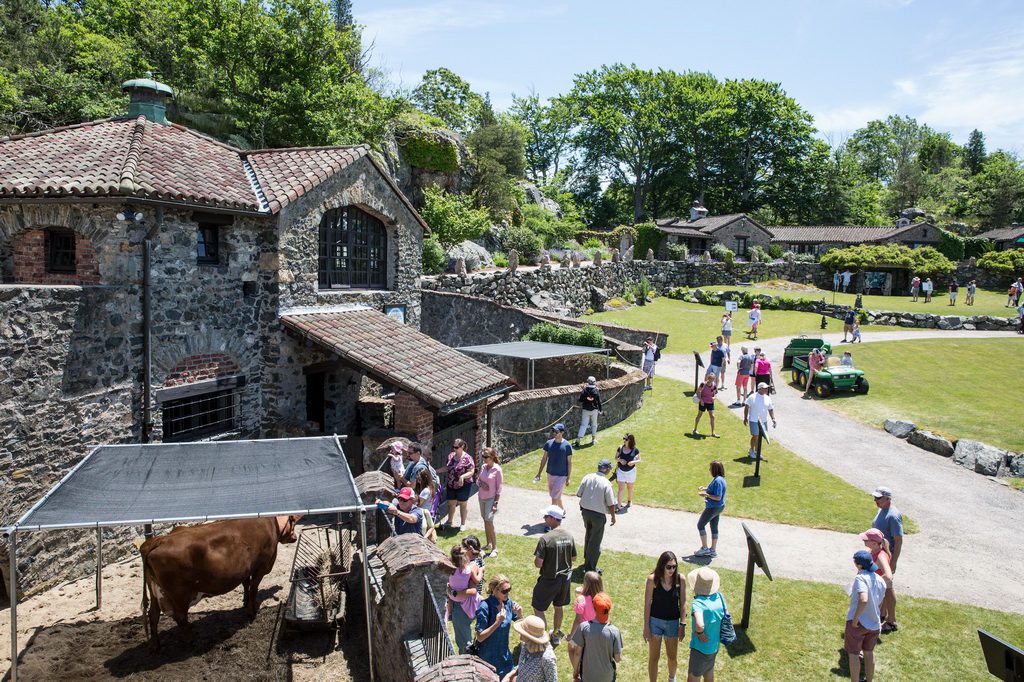 The SVF Foundation (SVF) a 501(c)(3) nonprofit organization, announced today that it has completed its 20-year mission to cryo-preserve the genetics of rare and endangered domestic livestock breeds and granted a conservation easement to Aquidneck Land Trust (ALT) governing approximately 24 acres of land in conjunction with its sale of the property at 152 Harrison Avenue in Newport, Rhode Island. In addition, SVF said that Ocean Hour Farm will operate the property.

“The SVF Foundation’s goals have been attained,” said SVF Executive Director Peter Borden, “and it’s time to preserve the property and pass it on to a new steward.” Conservation easements are binding agreements between a landowner and a land trust that permanently restrict development to protect the land’s conservation values. The conservation easement is the primary tool that has been used by ALT to protect critical open space on Aquidneck Island. SVF will donate the proceeds of the property sale to the Hamilton Family Charitable Trust to be dedicated to charitable purposes on Aquidneck Island, thus continuing the Hamilton family’s commitment to the community.

Founded in 1999 by Mrs. Dorrance H. Hamilton, the SVF Foundation has been operating since 2002 on two historic properties. The first, considered the main campus, was most famously developed by Arthur Curtiss James in the early 1900s. In 1916, James added the Surprise Valley Farm, or what locals referred to as the “Swiss Village” because of its resemblance to the southern region of Switzerland. The second property, a nearby 11-acre site, was formerly part of Hammersmith Farm. The SVF’s 15 buildings on the site include animal facilities, a procedures laboratory, an infirmary, a cryo-room, offices, and residences.

“We are honored to build on the legacy of the SVF Foundation and serve as the next stewards of this unique and beautiful land. Our goals for the future include integrating regenerative agriculture practices, developing experiential education programs, and continuing a robust science program,” said Rob MacMillan, a representative of Ocean Hour Farm.

Borden noted that early in his tenure, a large commercial hospital building was removed, restoring five acres of impervious cover to pasture and open space. “Mrs. Hamilton wanted to restore the historic exteriors of the Swiss Village, which were severely dilapidated at the time, while rehabilitating the interiors for a multitude of modern uses,” he said, adding that a 3,500 square foot post-and-beam barn was constructed for the housing of critically endangered livestock as well as the processing of genetic material. In April of 2003, SVF was awarded the Preservation Project Award by Rhode Island’s Historic Preservation & Heritage Commission.

“The permanent conservation of this historic treasure is tremendous news for our community,” said Chuck Allott, Executive Director of Aquidneck Land Trust. “We are grateful to the SVF leadership for their commitment to preservation, and we thank Ocean Hour Farm for becoming the next stewards of this superb property.”

More About SVF Foundation
The SVF Foundation was founded in 1999 by Dorrance H. Hamilton, a long-time Newport, R.I. resident and philanthropist whose interests included the preservation of important historical buildings and landscapes. Generous in spirit and vision, Mrs. Hamilton provided funding to meticulously renovate the 12 original buildings on the SVF’s farmstead in Newport.

SVF’s mission was the preservation of rare and endangered breeds of food and fiber livestock (cattle, sheep, and goats). To that end, SVF, with the assistance of Cummings School of Veterinary Medicine at Tufts, collected and cryopreserved over 100,000 samples of germplasm (semen and embryos), blood and somatic cells from over 1,100 animals, representing 36 breeds.

Over the course of the project, SVF thawed embryos from approximately 30 of the cryopreserved breeds, which were then transferred to surrogates, proving, upon birth, the viability of the collection process. This treasure trove of genetic material now resides at the Dorrance Hamilton Cryo Conservation Laboratory, at the Smithsonian Conservation Biology Institute in Front Royal, Virginia. www.svffoundation.org

More About Aquidneck Land Trust
Aquidneck Land Trust’s time-sensitive mission is to preserve and steward Aquidneck Island’s open spaces for the lasting benefit of the community. The organization has conserved 2,641.11 acres on 85 properties across Aquidneck Island since its founding in 1990. ALT is a 501(c)(3) non-profit organization and the first land trust in Rhode Island to have received national accreditation. For more information, visit www.ailt.org.