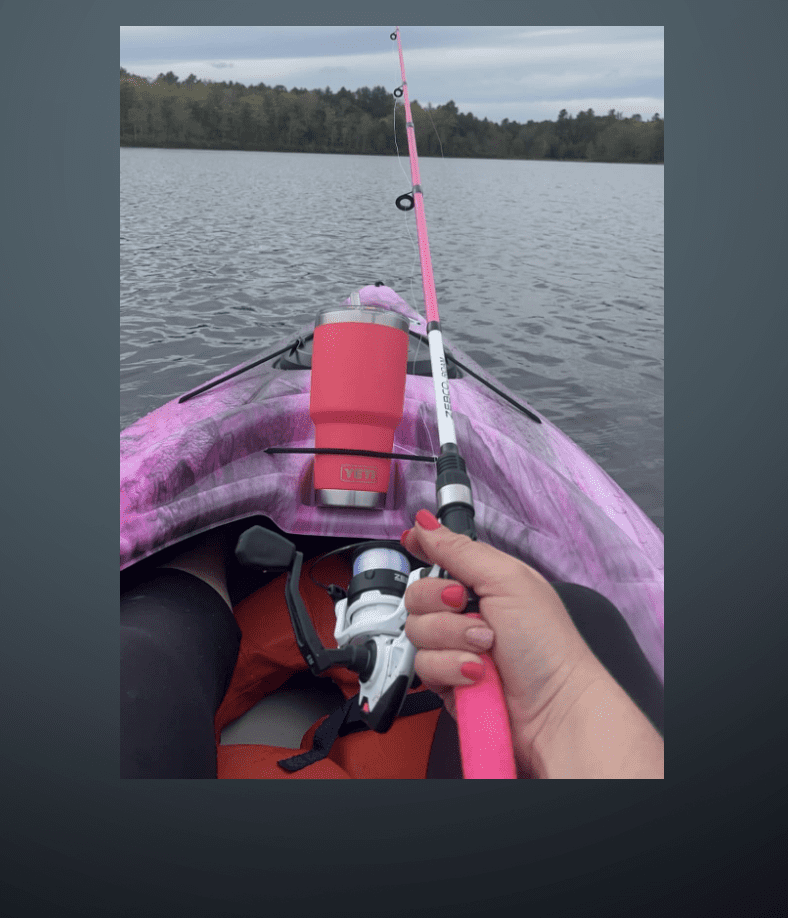 The bite is on. People are slamming bass all over the state with a large number of bass in the 4-5 lb. range and a few lunkers in the 6.5 lb. range. Some great photos of the same are posted on the Facebook Page “a better 401 fishing”. Trout are doing well also as friends are out taking trout on every other cast.  With the weather in the 90+ range this weekend this will drive the trout deep. It will be time to drop power bait or night crawlers on the bottom.

For those folks wanting an easy way to get on top of the fish try a kayak. At 40-50 lbs. almost anyone can lug a kayak from their vehicle to the portage. Don’t have a pick-up truck? There are a number of different racks to fit various vehicles that allow easy on, easy off. (Don’t forget to double check your locks and straps as the person behind you may not want your Kayak embedded in their windshield.)

After seeing the dark blue rig pictured turns out the author has an unused pelican fishing kayak sitting collecting dust in the backyard. Time for a shake-down cruise. If one watches the sales a decent kayak can be purchased in the $299-$399 range. Don’t know about you, but a coffee mug holder is a must have! If one is lucky to tie into a 5-6 lb. bass, they will drag you for quite a ride as a Maine 6 lb. bass dragged this writer and 200 lbs. of gear in a 14 Aluminum bass boat about 20 yards before it tired. In a kayak a 6 lb. fish may get your bow up on plane.

It is another banner year for Turkeys. Gentlemen: what is the story?  The ladies are showing you up something fierce as they are harvesting some fantastic birds. A small number of hunters have actually had the luck of taking 2 birds in one day. Surprisingly, there have been few turkey road kills. Supposedly one of the smarter birds, maybe they are aware of the threat of cars, unlike deer.

Just noticed that trap shells (12 ga 1 oz 7.5 shot) in some locations are priced at $18/box of 25 rds. Time to locate the old Lee load-all 12 gauge loader. Didn’t ever think it would be cost effective to load trap shells but here we are.

Years ago, there was a Myron’s 20 Gauge Sauce. It was on display at the Worcester Centrum sports shows some years ago. Chicken and fish were samplers offered marinated in the 20 Ga Sauce. It was unique and phenomenal!  Lee’s Supermarket in Westport, Mass was the only local Market that was willing to stock it, otherwise it was mail order. Much to the dismay of many a hunter and fisher 20 ga was discontinued. Cancel culture struck as they found the container, labeling and name offensive.  Talking to the Myron’s Parent Company CEO, he stated there was no plan to package in a different manner. He also would not divulge the recipe.  After some various attempts the closest match I found so far is 1 cup Soy Vay Teriyaki sauce, 1/8 cup Chardonnay or Sauvignon Blanc, dash of Emeril’s Dijon Mustard, Light Dash of Hot Sauce and 2 tablespoons of Italian dressing. Marinate for at least 2 hours. Works extremely well on Pheasant breast and drumsticks, as well as venison. Then fire up the grill!