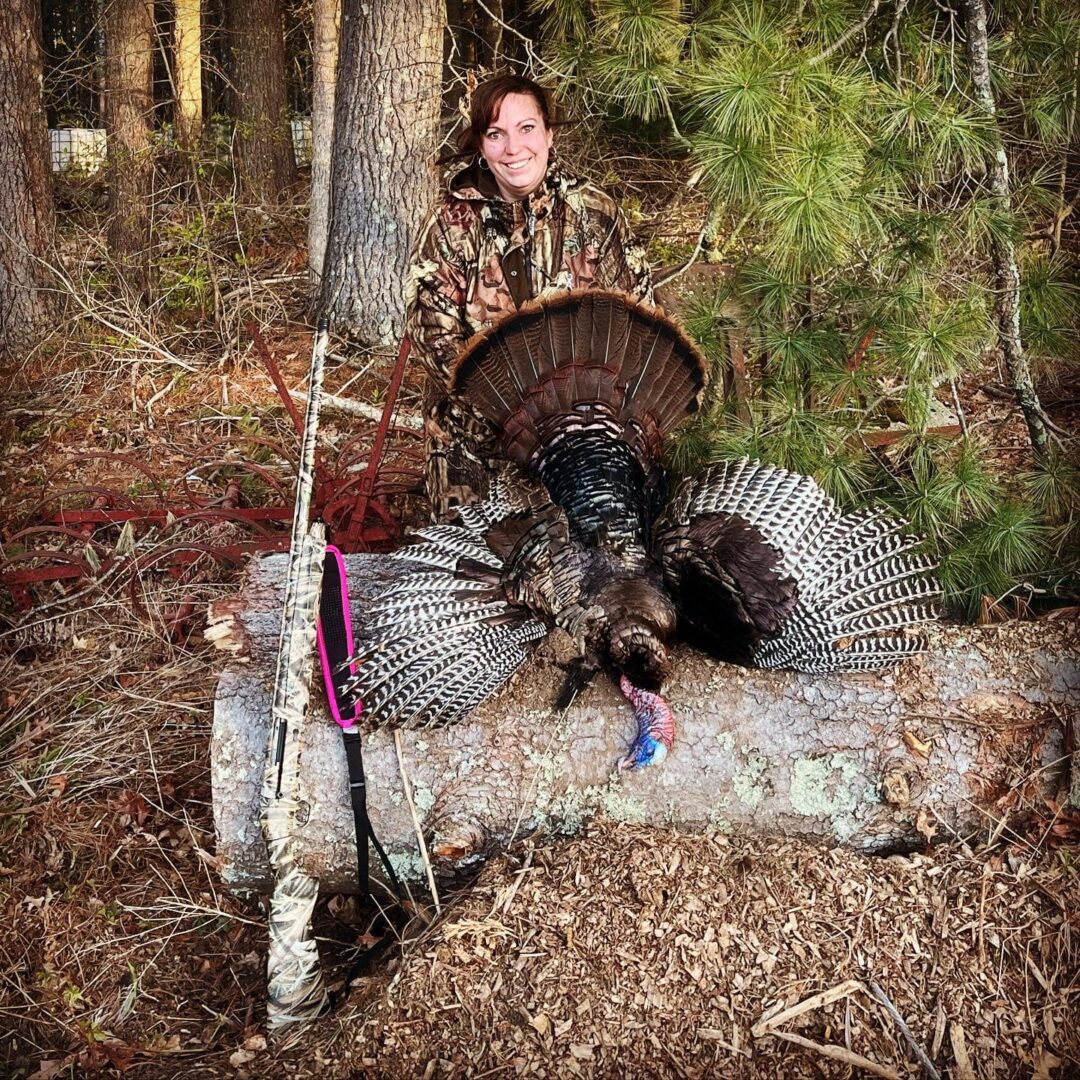 The Turkey hunters are having a lot of success this banner season. Numerous Toms have been taken by many friends around the state. Kayla Masse took this large bird on Sunday, creating a lot of pride in her family. What is outstanding, according to the National Turkey Federation, Kayla recorded the first Trophy Turkey for a female in Rhode Island.  Her bird scored 59.5 total, longest beard 9.75, longest spur and most weight. First in many categories. This was reconfirmed at 2100, 5/5/2022. Congratulations, Kayla, and great job!

The wildlife are in plain sight. This Tom was spotted near my house on my friend’s property. Though he looked a little thin, he had quite the beard.  He would not let me get up close to measure it exactly.

Looks like another banner year for deer as there are reports of does with 2 fawns. Reminder: if you see a fawn curled up like this little guy, leave him alone as mom is nearby.

There are fish to be had.  The ice was broken Monday with 7 decent rainbows caught in 40 minutes. Tuesday, same situation. For you naysayers “they are not stocking”,  I can attest they absolutely are!  Don’t be focused on fishing the same old way. 20 years ago, trout would slam a 2” floating Rapala with ferocity.  Now they won’t even look at it.  Time to think outside the box.  Monday night a lure that sat in the box unused for 3 years was pulled out and the rest is history in the picture. Same situation occurred Tuesday with the same neglected lure. If one sees still water and nothing on the surface, then one can figure the fish are on the bottom. A friend has good luck putting junk food on the bottom with a pea sized split shot. He states that the power-bait floats up off the bottom about 6” and is above any weeds or debris.  Some couples were catching some 18” Rainbows off the bottom in this manner about 2 weeks ago.

Looking to introduce someone to fishing? Free fishing weekend this weekend in Rhode Island, May 7th & 8th; Massachusetts, June 4th and 5th ,and new this year in MA, June 18th and 19th, Salt Water. Other states can be located in the following link:

For you boaters, kayakers and canoeists:  There is legislation in the RI State House directing the DEM to safeguard, monitor, and have jurisdiction over any and all dams in Rhode Island. This is to protect the water level and quality.  This will ensure safe boating as well as ensuring proper conditions for fish and wildlife going forward.

For all you Wildlife hunters: Petitioning the DEM to institute a Wildlife Trophy/Awards program. They feel this is good idea and will go hand in hand with a Landowner recognition program as well.

For you Clubs that stock game birds:  Please see the wildlife proposed regs 2022-2023 as there are multiple new changes regarding data information, stocking, and harvesting. Pages 25-28: