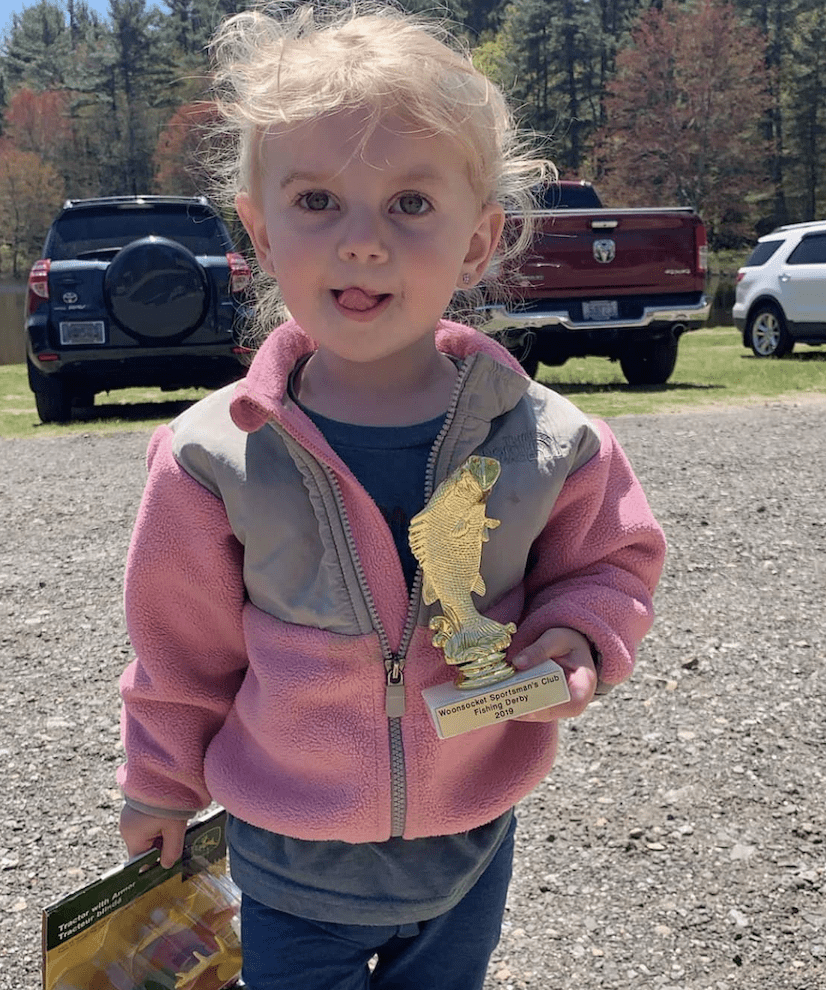 As fishing season is in full swing, various clubs are hosting their children’s fishing derbies. If you would like to advertise your club’s derby or the trophy ceremony, contact me.  Nothing is more eye catching than seeing the happy smile like with the cutie, above, holding her 1st trophy.  Even a tough as nails writer or even a club president gets mushy during these moments! Don’t know who is more ecstatic the youngsters or the parents who hold the fond memories dear. So don’t be timid – contact me at the email below to announce your fishing derby. I also have access to other online networks and will help you get the word out.

The ponds and lakes will have significant boating traffic now that the warm weather (exception being the damn wind!) is here. A reminder to all boaters:  People fishing must be given a 200’ buffer zone (~ 70 yards) and it is your responsibility to avoid the fishermen.

They did an excellent job, and the meeting went very smoothly.  At the request of RIFGPA members and also Facebook’s RI Small Game Hunters page, this writer addressed pertinent questions. The Dutch Island Management area is closed to hunting as remedial clean up continues. Opening the island to hunting will be determined by the Army Corp. of Engineers. Extending the Woodcock season is not possible as Federal Fish and Wildlife sets the number of days allowed to hunt woodcock. However, changing the timing of the window was met with interest and is a possibility into mid-December.  Back in the day, Woodcock opened November 1st.  Reopening on November 1st will push the season into mid-December which will benefit many of us as we saw woodcock December 1 through the 15th.  Stay tuned on that issue.

Coyotes are a major problem in Rhode Island. Many requests were made for nighttime hunting of Coyotes. It was met with interest.  More discussion will occur next Thursday. In the meantime, a colleague’s small dog was killed by a Coyote recently. Last week a 2-year-old Dallas, Texas toddler was attacked on his front porch and required surgery because of his wounds. As written before, Massachusetts has had numerous attacks on children that were scoffed at by some Coventry residents.  It is only a matter of time before a Rhode Island child becomes a victim unless the Coyote population is severely reduced. This reduction will have a colossal impact on the pheasant stocking program as well.  If one has input on this or other hunting matters the RIDEM will accept written input until 4 pm EST May 17th.  Speak up – that is how changes occur.  Speaking of changes, I think if hunters contact the RIDEM enforcement and say “We are going out night hunting at these locations” this will make it easier to legalize night hunting of Coyotes”.

For the Sports shooters:  The 9th Circuit Court of Appeals on Wednesday May 10th ruled that the ban on under 21-year-olds purchasing ALL semi-automatics including Modern Sporting Rifles was declared unconstitutional and violated the Second Amendment.  With things quiet for the moment in the RI State House it is time to hit them with a broadside. Use the above information to email or call your State Rep. and Senator.  Don’t know who they are contact me I’ll be happy to help, or contact your town or city hall.  The town or city halls will have that information right on the spot.  Even those of you on the West Coast reading this feel free to use any included information to support the 2A cause. Many legislatures across the USA are realizing the “handwriting is on the wall regarding Anti-Gun laws.”

Kayakers and Canoeists, Paddle-boarders. The wind has finally quieted down. The weather appears relatively calm so fire up those paddles and enjoy!