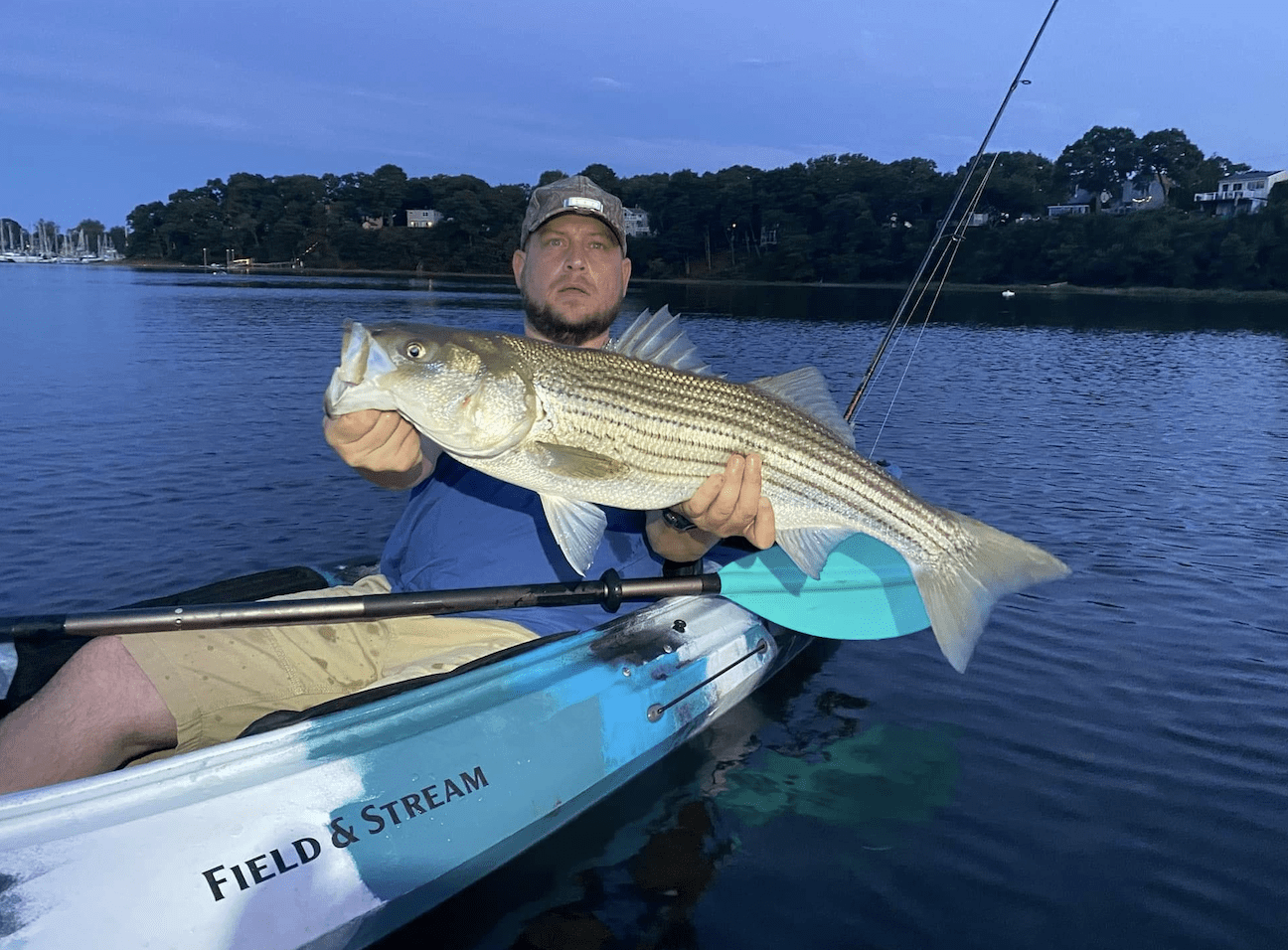 Two topics to cover today. First, is the great fishing occurring right now in New England. In Maine, freshwater Bass of both species are attacking anything thrown their way. A diving lure is often ambushed as it just hits the water surface. If there is any belly in the line one will miss the strike, however if your line is tight and set the hook right away, you’ll get the fish.

This writer had an oddity happen when 2 small mouth Bass hit the lure at the same time. They are pictured in the side photo.  A gentleman on A BETTER 401 FISHING Facebook page first photographed an incident like that about a month ago with 2 Rhode Island Bass.

On the Rhode Island scene Striper fishermen and women are slamming Stripers left and right. A photographer colleague is pictured with a really nice fish; unknown what he caught it on. A friend and RIFGPA member took another nice Striper again in the West Bay area of Narragansett Bay. Seated in a kayak, the fish must have taken him for quite the ride. Even if one doesn’t have a boat look for bait movement or seagulls working from the shore.  Either will show you signs there are Stripers or Blue Fish in the vicinity.

Second topic, following the 2A community gun legislation locally, and action at the Supreme Court. Now this is going to ruffle some feathers, but truth be told always!  It came to light this week that a local law firm wants, we’ve been told, $50,000 (50K) as an upfront initial down payment to litigate the RI Magazine Ban. Allegedly, a single different lawyer will litigate the under-21 ban and the longarms in public issues. Numerous ads are out asking all of you to donate to the “Cause”.  The donation collectors are the same that gave the money to the anti-gunners. There are some problems with this methodology:

1)  When a law firm wants money up front, in my opinion, that is indication that they may be more concerned about the money rather than the objective.  Edward Caniglia in Cranston battled his case all the way to the US Supreme court (SCOTUS) with ZERO help from ANYONE in RI.  His lawyers knew they would win and received a healthy chunk from the damages award in compensation. They did not ask Caniglia up front for any money. 1A) By asking for RI money up front the Magazine Ban, lawyers still get paid if they lose the case. 1B) If the other Magazine Ban cases or Assault Weapons Ban case, of which there are 3 cases total currently in SCOTUS with a 4th on its way – if any of these 4 SCOTUS cases wins in the gun owners favor, which more than likely will happen, then the RI cases will be moot. The 50K paid is likely kept and not returned. This is often the practice in Rhode Island as this writer had his lawyer state “Money paid up front is not returned to clients”. So, beware.

2) It is prudent for RI to sit back and see what happens next at SCOTUS now until mid-October. Word inside the DC beltway is SCOTUS will take a High Capacity case next. RI would be smart to ride it out until then. Who you donate money to is your choice and business, but after the 2A money going to the anti-gun local politicians, this writer is not donating to the same group and will wait to see how everything plays out. This was information available at 10am Thursday, June 30th

3) ALERT: Hats off to Brian Delfino and Mark Haley for alerting me to the SCOTUS decisions regarding 2 different Magazine Bans, a Modern Sporting Rifles ban and Hawaii’s Open Carry Ban at 1900 Thursday June 30th. We of the 2A world just hit a Grand Slam. The analogy of the NYC CCW case being the gun owners “Battle of Midway” stands true. All 4 major carriers (issues) have been accepted at SCOTUS for Writs of Certiorari and remanded back to the lower courts for a new judgement. Basically, “get it right this time”.  This is the turning point for all gun cases. Our legislative leaders, Joe Shekarchi and Domenic Ruggerio should have listened – because the RI Magazine Ban law possibly just went right out the window!

Alas, this writer did have one casualty during all of this commotion – he lost a good friend for unknown reasons, no explanation. She can rest assured my word of always having her back still stands. When this blocking was noticed on FB, this writer was en route to the north end of McGrath Pond to fish.

Going almost full throttle to blow off some of the displeasure of the situation, a small mammal was noticed treading water in the middle of the pond, one mile from any point of land. I cut the engine and circled back and saw a Shrew treading water for all his life. Yes “his” life – he doesn’t have a gender identity issue.  A few milliseconds was all it took to determine that just because I felt abandoned did not mean the same was going to happen to this little guy. Chivalry is not dead on my watch. All God’s creatures must be protected regardless of size. I scooped up R2D2 with a net and he ran under my middle boat seat.  He was appropriately named R2D2 as he made all these buzzing, squeaking whistling and chirping noises while under the boat seat as I was fishing. To show how life can have a ripple effect. What if I was 10 degrees more to Port or Starboard – I would not have seen him.  It was my intention to go to the very end of the lake. Instead, because of R2D2 I stopped with a half mile to go and fished there.  I hooked into a fat 16″ 3lb small mouth bass. Talk about a fighter!  Again, like other fish this week,  this smallie also slammed the lure the instant the lure hit the water. Newton’s 3rd law fits in here. If my boat was 10 degrees either way, no Shrew. No Shrew then the far end of McGrath Pond is a reality and no 3lb small mouth bass is caught.  A shrew is a feisty little guy with a strong will to live. A survivalist,  I don’t think the story of R2D2 is over. To quote my editor: “Nothing is a coincidence, anymore”

We need to protect America now more than ever as new threats will emerge, more than likely from within. Like the NAVY slogan, “Projecting power on all corners of the globe & protecting America from those that threaten both foreign and domestic”.

See you next week with Champagne in hand. Happy 4th!