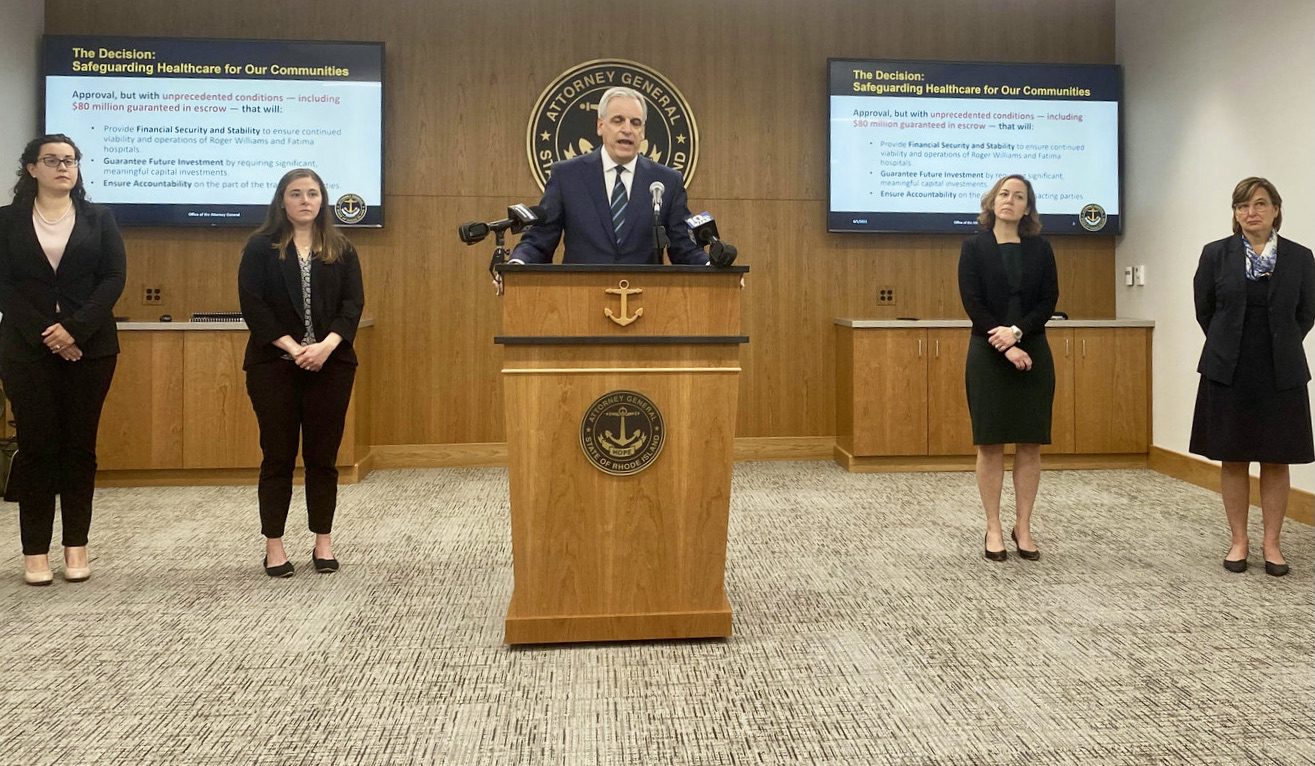 Photo: R.I. Attorney General Peter Neronha, surrounded by his legal team, announcing the decision to approve the transfer of ownership of Prospect Medical Holdings for two Rhode Island hospitals, conditioned on the creation of an $82 million escrow account.

R.I. Attorney General Peter Neronha showed his true grit, acting as the state’s number-one public health advocate with authority granted him under the Hospital Conversions Act, refusing, as he put it, to be “rolled” by the for-profit private equity owners of Prospect Medical Holdings.

At a 40-minute news conference held on Tuesday, June 1, Neronha laid out, in succinct fashion, his conditional approval of the sale by for-profit Leonard Green Equity Partners of its 60 percent share of Prospect Medical Holdings, for the sum of $12 million.

The purchase was conditioned on the placement of $80 million in an escrow account to secure the financial stability of the two hospitals in Rhode Island owned by Prospect Medical Holdings, in order to cover operating expenses and debt obligations over the next five years.

In addition, conditions were placed on the new owners, Sam Lee and David Topper, who now control 100 percent of Roger Williams Medical Center and Our Lady of Fatima Hospital, that will prevent them from selling the hospitals and then leasing them back in order to pay off an existing debt of some $113 million in a note that comes due in July of 2022.

Neronha called his actions “unprecedented” but necessary to protect Rhode Islanders. The purchase agreement comes after several months of contentious debate between the R.I. Attorney General and the owners of Prospect Medical Holdings, often played out in the news media.

‘We’re going to do our job’
Neronha laid out his rationale for what drove his decision-making, providing a 21-page slide deck that outlined in graphic detail the financial analysis that precipitated the placement of $82 million in an escrow account to protect against potential failure by Prospect Medical Holdings to finance the hospitals’ continued operations and sustainability.

In doing so, Neronha provided the kind of expert documentation of everything that appears to be wrong with for-profit, private equity financing of hospitals and health care delivery systems, which appear to put financial return above the well being of patients and workers.

“We shouldn’t be the cheerleaders for transactions; we’re a regulator,” Neronha said, responding to a reporter’s question about implications of the Prospect Medical Holdings’ decision and its potential impact on the pending merger of Lifespan, Care New England and Brown University.

“I think the …takeaway is this,” Neronha continued. “We’re going to do our job, and we’re going to look at these transactions carefully. And, if we feel that we need to fight on behalf of the people of the state of Rhode Island, we are going to do that.”

Neronha then shared his belief about the proper role of a health care regulator that the Attorney General plays. “As regulators, you can’t get rolled,” he said, and repeated: “You can’t get rolled. You have to stand up. Sometimes that means fighting on behalf of the people of the state.”

Neronha praised the legal team working with him, which included sharing the spotlight at the news conference on June 1 with four members of his legal staff – Miriam Weizenbaum, the chief of the civil division, Adi Goldstein, the R.I. Deputy Attorney General, Jessica Rider, health care advocate, and Maria Lenz, from the civil division, praising them as “terrific lawyers.”

“We are building an organization that will fight for the people of this state. And, I really believe that when we do that, we get great outcomes. But you can’t be afraid to take a stand. And that’s what we did here, I think. I am confident that we’ve achieved a good result for the people of the state.”

A most important conversation
For all the ongoing discussions about health care delivery in Rhode Island, including last week’s Facebook community gathering hosted by Gov. Dan McKee and moderated by CommerceRI Secretary Stefan Pryor, the R.I. Attorney General’s skillful presentation was one of the most important discussion about the future of health care in Rhode Island, in ConvergenceRI’s opinion.

To set the stage, ConvergenceRI believes it is important to summarize what transpired in the transaction, with numbers shared from the financial data crunched mind-blowing.

The song that kept playing in ConvergenceRI’s head as Neronha gave his presentation was the Led Zeppelin lyric: “You need coolin’, baby/ I’m not foolin’/ I’m gonna send ya back to schoolin’… The R.I. Attorney General, it seemed , was returning the owners of Prospect Medical Holdings back to financial school from re-grooving.

Astounding numbers
The actual financial numbers involved in the conditional approval of the transaction in which Leonard Green sold its 60 percent share of Prospect Medical Holdings are, by themselves, astounding:

• The sales price was $12 million, to be paid by Prospect Medical Holdings, not by the new owners, Sam Lee and David Topper.

• As part of the deal, Leonard Green was asking to be absolved of some $3.1 billion in Prospect Medical Holding debt.

• In 2018, the board of directors of Prospect Medical Holdings did a $457 million leveraged dividend recapitalization that substantially weakened the balance sheet of the firm.Translated, the board took out a $1.12 billion loan, paid off some existing debt, and then paid $457 million in dividends to Lee, Topper, and Leonard Green partners and investors.

• In 2019, to pay down its debt and raise cash, Prospect Medical Holdings sold 14 of its 17 hospitals to a real estate investment trust, Medical Properties Trust, Inc., for $1.4 billion, then leased them back for 15 years.

Translated, these transactions benefited the shareholders and weakened the financial position of Prospect Medical Holdings, according to expert analysis conducted on behalf of the R.I. Attorney General’s office.

Takeaways
There were several takeaways that should be mentioned up front in talking about the R.I. Attorney General’s conditional approval of the sale by Leonard Green of its 60 percent share of Prospect Medical Holdings.

First, the R.I. Attorney General has built a crackerjack team of attorneys to regulate health care in Rhode Island.

The public relations efforts by Prospect Medical Holdings to claim, falsely, that the R.I. Attorney General’s office was trying to impose financial conditions that would force the closure of two hospitals backfired, big time.

With his June 1 decision, the R.I. Attorney General has emerged as the primary driver and regulator of hospital transactions in Rhode Island, with the R.I. Department of Health apparently taking on a lesser role. Subsequent to the decision announced by Neronha, the R.I. Department of Health did issue its own writen approval to the deal, in conjunction with the findings of the Attorney General.

The one item that drew ConvergenceRI’s attention, which was found on Page 15 of the director’s decision, under Condition 20, was this: Within six months of the transaction, Prospect Medical Holdings will meet with the collaborative partners of the local Health Equity Zones to develop a written plan for the investment of $500,000 over five years to support the HEZ collaborative, with a minimum of $100,000 to be invested each year of the five-year time period. Translated, Prospect Medical will be investing $500,000 of its own money to support the Health Equity Zone initiative in Rhode Island.

To follow this story and its continuing sections, go to: http://newsletter.convergenceri.com/stories/exposing-the-pitfalls-in-private-equity-financing-of-hospitals,6589