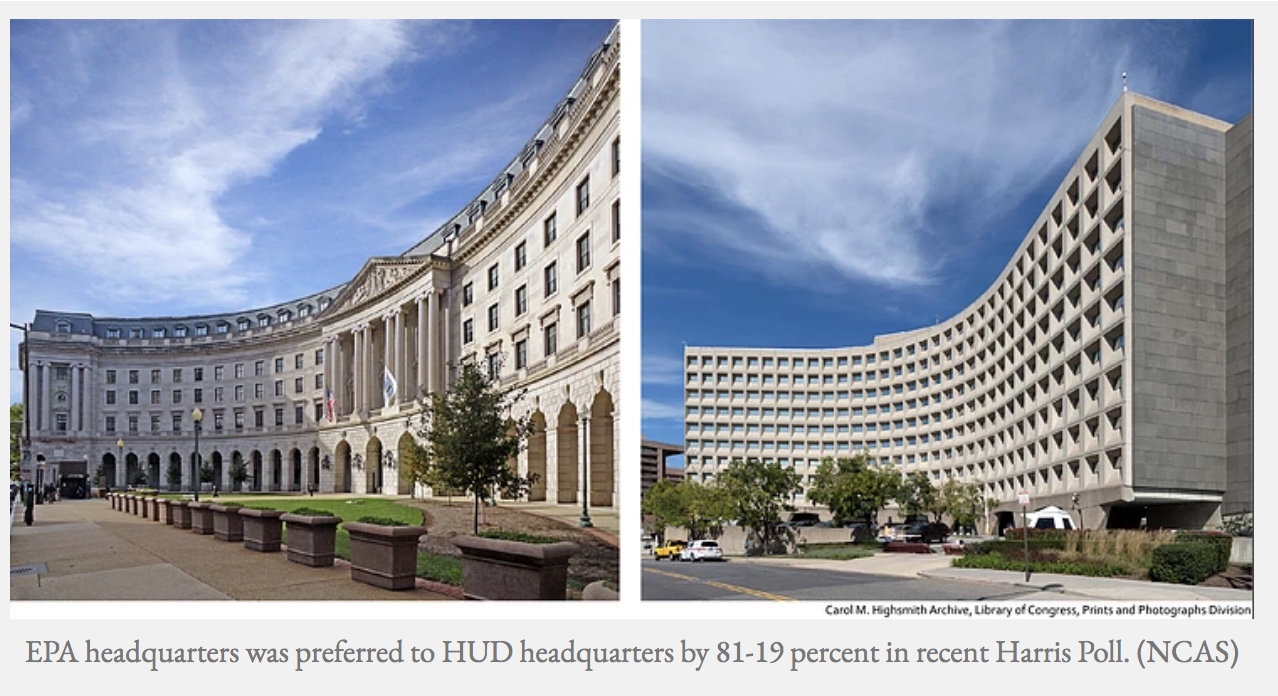 I have just now learned that the draft executive order on federal architecture that was leaked last April has today been signed by President Trump. “Making Federal Architecture Beautiful Again” is now called “Promoting Beautiful Federal Civic Architecture.” I see no major changes that would affect its purpose of making classical and traditional styles the default design for new and redesigned federal buildings in Washington and around the nation.

This is excellent news. If Joe Biden ends up replacing Trump as president, the executive order will make it easier for him to use classical architecture as a means of unifying the country after a difficult election campaign. If he chooses to reject the executive order or its purpose, he will not be able to do so without publicly rejecting the sentiments of a large majority of the public.

Events at the General Services Administration hint that the old mandate in favor of modern architecture for federal buildings, which was instituted in 1962, has come into disfavor. At least two new federal courthouses have been proposed for construction in classical styles, and at least two such courthouses in classical styles have recently been completed, both in Alabama.

Whoever was elected president – which has not, I think, been factually or legally established – more new federal buildings designed in one of the wide variety of classical or traditional styles will beautify their locations and, as beauty naturally aims to do, raise the spirits of the general public. As stated in the E.O.:

Societies have long recognized the importance of beautiful public architecture. Ancient Greek and Roman public buildings were designed to be sturdy and useful, and also to beautify public spaces and inspire civic pride.

Eight years after Daniel Patrick Moynihan wrote the original modernist guidelines adopted by the GSA in 1962, he wrote:

That was the result of Moynihan’s guidelines, which asserted that “an official style must be avoided.” But whether it was his intent or not, his guidelines have served as an official style. He wrote them while he was a counselor to LBJ, which means that the guidelines originated, for all practical purposes, as an executive order. It was no more and no less a “mandate” than is Trump’s executive order, and indeed the idea that a mandate somehow reflects an abuse of power is false: it depends on what is being mandated. Laws passed by Congress are mandates, and so are the regulations designed either to carry out laws or, as any old Washington hand will admit, to bury them in the coils of the vast bureaucracy. Mandates characterize every government, not least our own federal government.

Trump’s signing of the executive order follows his signing last summer of an order mandating figurative rather than abstract design for sculpture on federal premises, including U.S. parks and the grounds of U.S. buildings. Where this statuary E.O. originated I don’t know. The architecture E.O. appears to have originated, as do many ideas taken up by the federal government, with an organization devoted to public policy, in this case the promotion of classical design. If some people are reluctant to credit this E.O. to a recent evolution in Donald Trump’s widely deplored aesthetic taste, they may feel free to credit the National Civic Art Society, whose president, Justin Shubow, sits as a Trump appointee on the U.S. Commission of Fine Arts. No doubt others inside and outside the White House were involved. Shubow and his organization nearly defeated the Frank Gehry design for a memorial to President Eisenhower, and they have also proposed a restoration of New York’s Penn Station using the demolished original design by Charles Follen McKim of the famous Gilded Age classical firm McKim Mead & White.

Whoever is president, if this E.O. is carried out and becomes policy at the federal level, it will eventually have a profound influence on architecture at every level of society. More schools of architecture will institute additional curricula to teach classical in addition to modernist principles and techniques. More classicists will graduate, and they will get jobs at firms that had previously refused to hire any but modernist architects. Cities and towns will be more likely to consider classically designed proposals for local government buildings. Development agencies will allow a more level playing field for projects in classical styles. As more classical buildings are built, the public will learn, at last, that classical architecture is a source of beauty that has not been relegated to the past, as modernists have long insisted, but is available today as a practical alternative to the reigning ugliness.

This is how leadership operates and how society can change to reflect progress in social attitudes. A Harris Poll found in October that nearly three-quarters of the public, as a whole and in a wide range of demographic categories, prefers classical architecture to modern architecture for federal courthouses and other buildings. One startling result of that survey was a column by Aaron Betsky, a polemicist at the American Institute of Architects, that said the general public’s preference for classicism was only natural. He pretty much took it back in the second half of his essay – to which I expect to devote a post soon – but he would certainly not have made such a concession without the publication of a persuasive survey by such a reputable polling organization.

The fate of this executive order is no more or less certain than the fate of Donald Trump’s presidency. The Oval Office could – and looks as if it will – be occupied by Joe Biden, but who really knows? Either way, the restoration of beauty to our built environment is more likely to be achieved if the discourse on American architecture is allowed to proceed without the baggage of American politics.