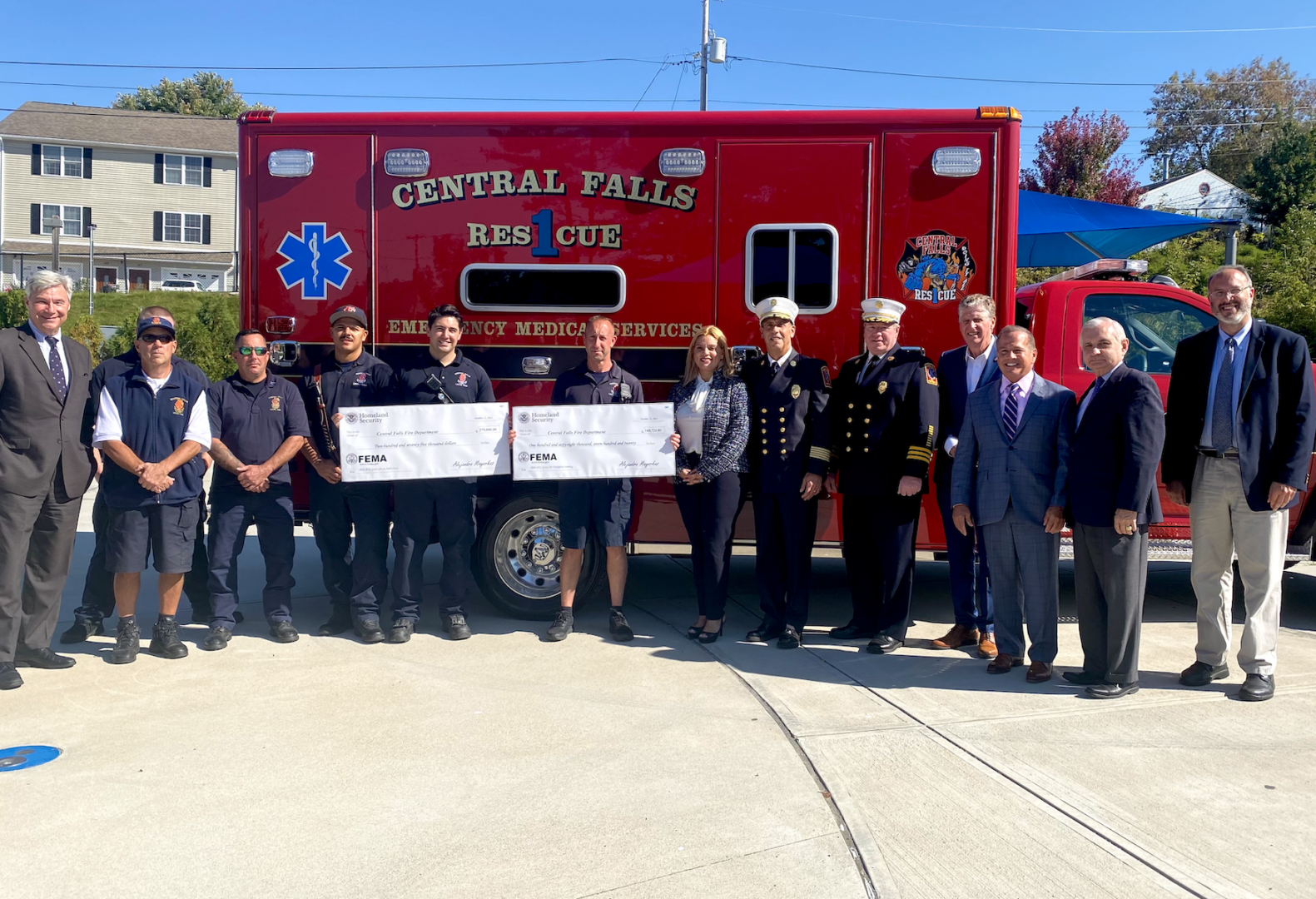 Hard-hit by COVID-19, the City has been without use of an ambulance for eight months despite thousands of EMS calls

As the City of Central Falls was devastated by COVID-19 throughout the early and peak days of the Pandemic, there was one specific hurdle making the battle to beat COVID-19 even more challenging: the City’s first responders didn’t have a single working ambulance. Through collaboration with Rhode Island Commerce and Congressional Leaders, the City of Central Falls announced today it has won more than $800,000 in critical federal grant funding to provide the Central Falls Fire Department with two new ambulances, important firefighter training, and other necessary equipment.

“Among the stressors of the Pandemic, all of this was made 10 times more difficult because our City didn’t have a single operating ambulance vehicle for eight months. As one of the busiest fire departments in the state responding to roughly 4,000 EMS calls a year, this was a huge challenge for us and our ability to provide life-saving services to our residents,” said Central Falls Mayor Maria Rivera. “Thanks to the incredible collaborative work of our Congressional Leaders and Rhode Island Commerce, with our City’s Fund Developer and the life-changing investments by our grant funders, we now have critical resources to provide reliable emergency services.”

Through the Pandemic, Central Falls EMTs have responded to hundreds of COVID-specific emergency calls, on top of other critical health emergencies, like back-to-back life-threatening house fires, requiring EMT services. The lack of a reliable ambulance has exacerbated health hurdles in the City, until now.

“Central Falls is one of our cities most impacted by the COVID-19 pandemic, and firefighters and EMTs were working under extremely challenging circumstances,” said Governor Dan McKee. “Today’s announcement of funding that will go towards two rescue vehicles for the city is a helpful step in the right direction. Our communities rely so heavily on our first responders, perhaps now more than ever, and it is crucial that we continue to support them and utilize available federal resources. Congratulations to the City of Central Falls on this much-needed investment in public safety, and thank you to the local, state and federal partners who made it happen.”

“When I first became the Fire Chief in Central Falls, I faced an enormous challenge of how to provide first rate care to our residents without an operating rescue vehicle. The rescue we had was being repaired which took months to accomplish and tens of thousands of dollars. I had to very humbly ask approximately 10 different communities throughout RI and nearby Massachusetts to borrow their spare rescues so we could still provide care to the residents,” said Central Falls Fire Chief Scott Mello. “With the unmatched support of Mayor Rivera and our Federal Delegation and Rhode Island Commerce Secretary Pryor this realization of two brand new rescues would have never been possible. Their support has allowed myself and the Central Falls Fire Department to continue to provide outstanding care to all of our residents.”

“I’m pleased to see federal grant programs my colleagues and I have worked to support are paying dividends in Central Falls,” said U.S. Senator Reed, a senior member of the Appropriations Committee. “I commend Mayor Rivera, Chief Mello, and everyone who worked together to make these competitive federal grants a reality. By tapping federal resources under the Community Development Block Grant and other programs, the state and the city are maximizing the investments for the community in a way that will help improve public safety and city services far into the future.”

“Central Falls has been through so much over the past year and a half. The hardest hit part of Rhode Island had to rely on ambulances from other cities and towns to transport patients to the hospital during the height of the pandemic,” said U.S. Senator Sheldon Whitehouse. “It’s a relief that we were able to secure this federal funding so that the City can soon have two rescues of its own.”

“Our first responders work tirelessly to protect our communities,” said Congressman David Cicilline. “The new rescue vehicles, equipment, and training, supported by federal funding, will help our front-line heroes do their jobs safely and effectively while serving the people of Central Falls.”

“We are pleased to help make this critical investment in Central Falls’ public safety and public health. We salute Mayor Rivera for her leadership, Governor McKee for his support, our federal delegation for delivering these resources, and our Office of Housing and Community Development including Michael Tondra for today’s announcement,” said Rhode Island Commerce Secretary Stefan Pryor.

The Central Falls Fire Department has recently started utilizing its first new ambulance, with the second set to arrive in the City in the coming months, which will bolster the Fire Department’s fleet and help provide outstanding care and compassion to residents for years to come. The training grant will be utilized throughout the next two years to provide advanced training and professional development to the members of the department – a vital piece of the entire standard of care the Department strives to provide to the Central Falls community.

“During a time when Central Falls has needed resources for our first responders more than ever, our City’s ambulances have become less and less dependable, with repair costs completely out of reach,” said Central Falls Fund Developer Derek Collamati. “As the City’s Fund Developer, I saw first-hand how engaged our Congressional Leaders and Rhode Island Commerce were in helping us secure these federal grant dollar solutions. I’d also like to give a special thanks to the USDA for going above and beyond to help our City during a time of great need.”