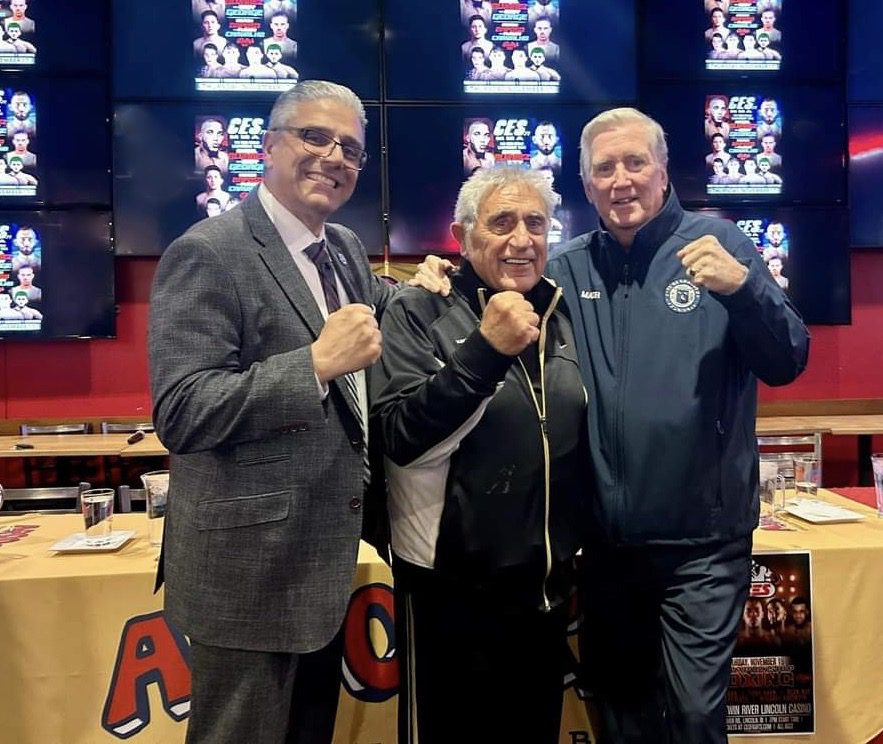 Big week ahead for Burchfield and CES – Brendan Higgins

A press conference was held this past Monday at Arooga’s in Warwick to announce a blockbuster weekend of CES Boxing and MMA action coming to Bally’s Twin River Lincoln Casino.

As usual, promoter Jimmy Burchfield is pulling out all the stops to deliver the best in Combat Sports. These events will have something for everyone. First, on Thursday, November 17th, an exciting night of MMA action. Then on Saturday, November 19th, a Boxing doubleheader beginning at 1 p.m. with the 2022 Rocky Marciano Tournament finals featuring top amateur stars Will Guilmette and Cranston’s own Aiden Balletto. He is the son of Gary ‘Tiger” Balletto. Both were in attendance for the press conference along with special guest, Cranston Mayor, Kenneth Hopkins. It was clear how much the mayor supports this young fighter.

Another undefeated fighter competing Saturday night is heavyweight Sean Bey (7-0, 7 KOs) fighting out of Big 6 Boxing in Providence. All 7 wins have come by knockout. Not only is Sean Bey undefeated, but I have also yet to see anyone hit him. He has developed a reputation of taking his opponents out in the first round. On Saturday night, Bey will be put to the test by journeyman Terrell Woods (28-55-9, 20 KOs) of Forrest City, Arkansas. Woods has 92 professional fights under his belt.

All CES fighters make time for their fans. At the press conference, Sean met one of his fans, Kelly Gentile, of Stoughton, Massachusetts. The same town Bey grew up in. During their introduction, Kelly shared some personal history of hers with the fighter. She said, “I bet you didn’t know we have something in common.” Sean curiously asked, “What’s that?” Kelly said, “I beat cancer just like you did.” For a moment they both stood in silence before Sean smiled and gave her a hug. It was a special moment for both.

In the main event Saturday night, the exciting Toka Kahn (28-2, 19 KOs) from Providence, will tangle with Jonathan Oquendo (31-7, 19 KOs) from Vega Alta, Puerto Rico. These two warriors will clash in a 10 round super featherweight fight with ranking and title implications on the line. On Saturday night you will also see undefeated super welterweight Francis Hogan (12-0, 11 KOs) aka Frank “The Tank.” Two more fighters also in action from the Ocean State include featherweight Michael “Bling Bling” Valentin (6-1-1, 1 KO) and middleweight James Maner (2-0, 2 KOs) of Johnston.

You don’t want to miss any of this exciting MMA and Boxing action coming your way. For tickets and more information on these and all CES events visit cesfights.com