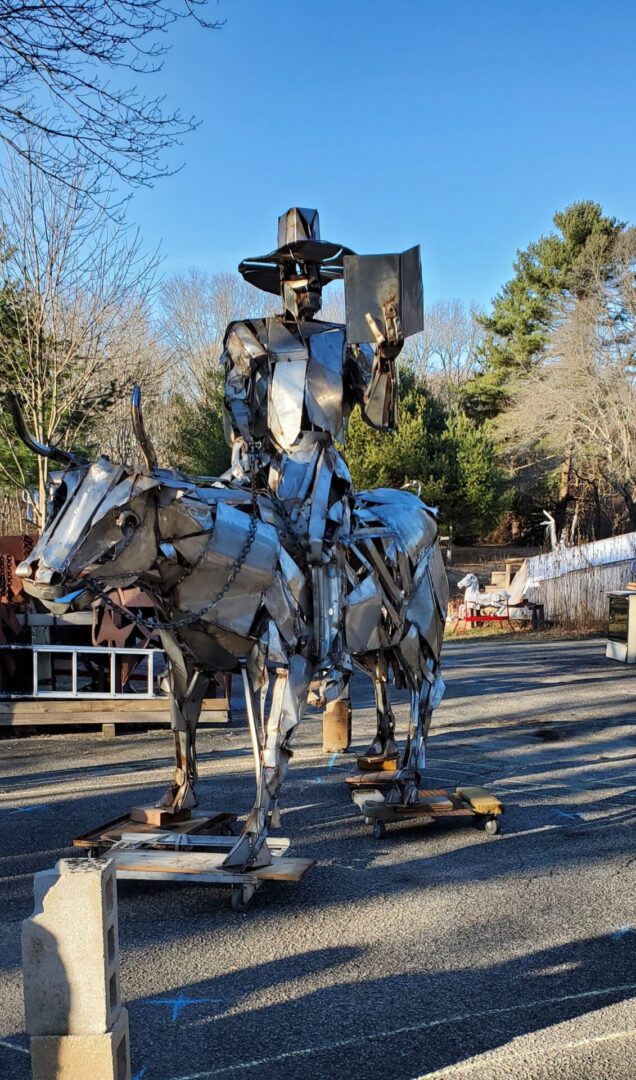 Peruko Ccopacatty’s work can be seen in several Rhode Island locations, including Kennedy Plaza. As of yesterday, an 18 foot sculpture was installed at the corner of Roosevelt & Exchange in downtown Pawtucket, just across from the fire station. Sure to catch the eyes of returning Tolman High School students, the Don Quixote-like sculpture depicts William Blackstone, the namesake of so many sites in the greater Pawtucket area.

Louis Yip, Sunny Ng and designer Morris Nathanson commissioned the statue, and financing was provided by Ng and Yip.

The statue, as is the case with many public art projects is not without controversy and Blackstone’s past was called into question as inappropriate to be recognized due to historical issues with Native Americans at the time of the founding and development of Pawtucket.

Educational components will be added to the statue area that will further education visitors on the full story and rich heritage of Native Americans to the city, working with The Tomaquag Museum.

In a statement by the artist, Ccopacatty said he “hopes that Pawtucket will celebrate their history with this communal sculpture named “Toleration” and their many-faceted historic community evolved from centuries of immigrant skill and energy joined with the founding and wise welcoming native peoples of this valley, this earth, named Blackstone and earlier in the language of the Narragansett tribe named Sneachteeconnet *, meaning rocks in or along the river.”

More on this discussion at: https://blackstonevalleytourismcouncil.org/william-blackstone-monument-discussion/

Public art can be fun for families to get involved in – Ccopacatty’s work can be seen in many locations. One of the most recognizable is his work in Kennedy Plaza, Providence:

Peruko Ccopacatty is an international artist known for dramatic and monumental works in metal and the wall mural spanning four decades.  Born on Lake Titicaca in the Andes of Peru, Ccopacatty is an indigenous artist of Aymara heritage. He is a unique voice for indigenous Andean peoples.  His work expresses his personal identification to his rich cultural history while focusing on the power of art to synthesize and express a universal humanity.

The work of Ccopacatty is exuberant, dynamic, tragic, structurally stable. The forms grow from his life, in the Andes of Peru; from his ancient culture, the Aymara; from Lago Titicaca, the sacred lake of the Inca and his island birthplace. That place and people are the point of departure in his themes of family, work, struggle and triumph, evolving sculpture and sculptor to the universal human drama and the universal human. He says, “My sculptures have a relationship to time and distance. My work reminds me of my history, my spirit doesn’t forget this ancient dimension. As a sculptor, I have this same urgency to connect the past with the future. I am still answering this question. It has to do with a process of investigation, pre-historic stone, modern techniques,unification… “.

Ccopacatty’s art is dramatic and monumental, notable for his particicular ability to define movement. His sense of the dynamic is established in the open construction of his pieces. The drawing clings to the finished work, an element of how the construction began, an insinuation of tendons, bones, muscles. In his search he says, “I look for the dynamics of movement and externalize the internal structure of the human form”.

Amongst others, dancers and doctors find great joy in his work, the first because he has captured a gesture halfway between one movement and another, the second finds surprise in the accuracy of the human structure, expressively composed beyond the rigid limits of the material. The fluidity achieved in his metal sculpture, comes from Ccopacatty’s insistence.., “to master technique, to dominate the material”. He uses the material of technology to sympathize with a humanity victimized by its own discoveries. He hopes in liberating metal to art, in re-use of the discarded, to relate the idea of humanity as its own solution.

Ccopacatty is interested in art as a communication, interested in large-scale art as a way of sharing. The sculpture, the murals and reliefs hold one thread, that of a monumental, heroic humanity, gathering together in great energy, in a particular moment called art or prophesy. He amplifies his artistic search, by focusing on the power of art to synthesize and express a universal humanity. The success of his effort, may be measured in the words of one critic, who says: “Since arriving in the United States, his work has increased in power and importance. Using his South American perspective, he may be the most prolific and articulate recorder of American life”.

Ccopacatty visits Peru frequently and maintains a studio in West Kingston, Rhode Island, USA.  He is represented by Skye Gallery in Providence, Rhode Island and responds to commission requests.