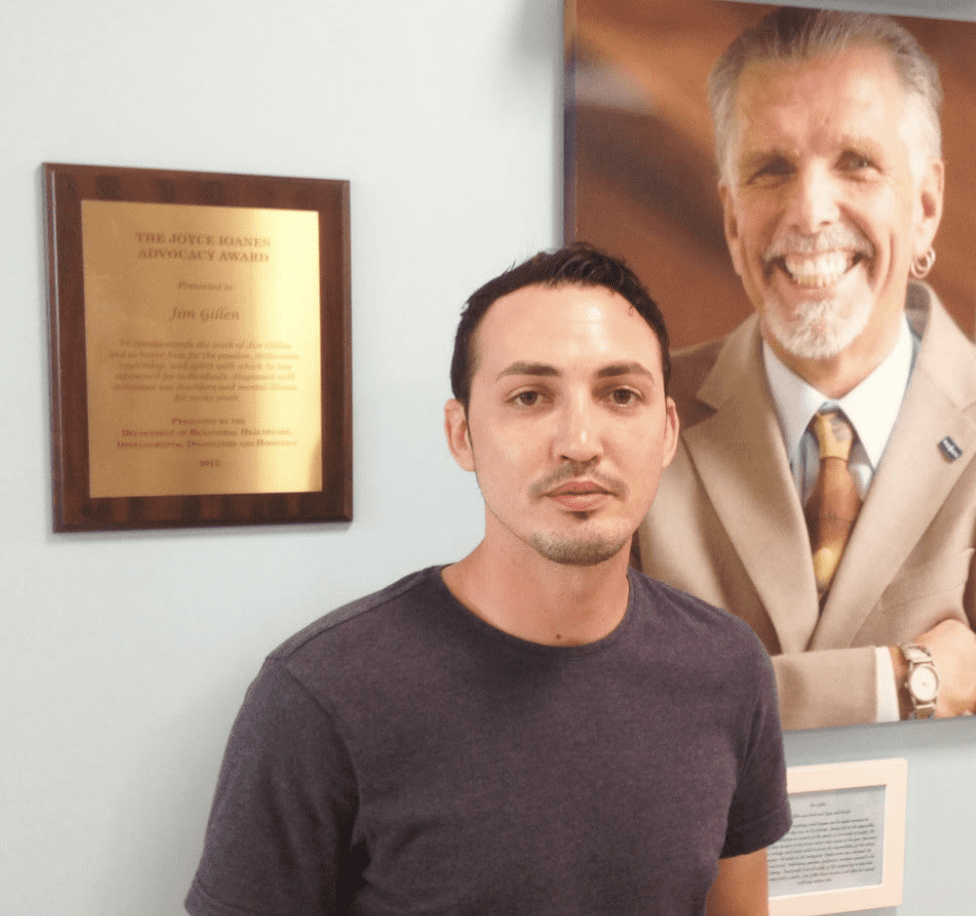 Photo: Jonathan Goyer, standing underneath a portrait of Jim Gillen

A recommended slate of five expert and community members chosen by the chairperson did not allow for other potential candidates to be considered and voted upon.

Call it the liveliest experiment now ongoing in Rhode Island. Thanks to the innovative legal strategies pursued by R.I. Attorney General Peter Neronha, more than a hundred million dollars in settlements from lawsuits against drug manufacturers such as Purdue Pharma,, drug distributors such as McKesson, and consultants such as McKinsey & Company have been placed in a fund focused on “opioid abatement,” to be disbursed over the next 18 years through the auspices of an Opioid Settlement Advisory Council. [See link below to ConvergenceRI story, “Holding bad corporate actors accountable for their misdeeds.”]

Instead of the money from legal settlements flowing into the coffers of the state’s general fund, in a novel approach, 80 percent of the dollars are to be disbursed through the new advisory council, under the direction of the R.I. Executive Office of Health and Human Services, with participation from community members, experts, and state and county officials.

In addition, in a settlement announced on March 22, the drug manufacturer Teva agreed to supply Rhode Island with large enough quantities of Naloxone and Suboxone that are sufficient to meet the state’s projected needs for the next 10 years, according to state health officials. The supplies include 50,000 kits of Naloxone [100,000 nasal sprays] valued at $62.5 million, and Suboxone medication valued at $16 million over 10 years.

The Opioid Settlement Advisory Council held its first public meeting on Friday morning, April 29. Unfortunately, no members of the Rhode Island news media thought it was “important enough” to cover what happened – save for ConvergenceRI.

For the second time in a week, ConvergenceRI found himself to be the sole media representative reporting on a critically important meeting tied to the future public health and economic prosperity of Rhode Island.

It is one thing to seemingly shirk reporting responsibilities and allow a public forum on the spending trends analysis for $8 billion in state health costs in 2020 to go “uncovered.” [See link to story in this week’s edition, “Distraction rules: Are $8 billion in annual health care costs the ‘third rail’ in RI politics?”]

But was it an error in news judgment not to cover the initial meeting of the Opioid Settlement Advisory Council? Some potentially serious problems arose at the meeting, problems that could undermine how the new funds are to be invested.

Ongoing public health emergency
The opioid overdose epidemic has morphed over the last decade, moving away from the way that addictive prescription painkillers such as OxyContin were marketed and sold by unscrupulous companies. Today the public health emergency continues, but fentanyl, in the potent form of an illicit synthetic street drug, has become the major driver of overdoses and deaths in Rhode Island – and the nation.

The latest data from the R.I. Department of Health underscores, in chilling fashion, the lethal consequences: the ever-increasing death toll from the opioid epidemic in Rhode Island, exacerbated by the stresses of the coronavirus pandemic.

• In 2021, there were 435 overdose deaths in Rhode Island, a dramatic increase from 2020, when 384 overdose deaths occurred – an increase of 51 deaths over the previous year, which had been the highest death toll ever.

Members appointed
In recent weeks, the first 12 members serving on the Opioid Settlement Advisory Counsel have been appointed, without much publicity and little public scrutiny.

The Council’s chairperson chosen was:
• Carrie Bridges-Feliz, Vice President of Community Health and Equity at Lifespan, and a member of the board of directors at the Rhode Island Foundation.

The major task at the first meeting of the Opioid Settlement Advisory Council was to select the five remaining representatives to the Council – two members from the community and three experts.

Chair Carrie Bridges-Feliz presented her recommended slate of new members – and that is where the discussion appeared to go sideways.

Empathic break
The proposed slate included five individuals who had apparently been hand picked by Bridges-Feliz. The problem was that there were several potential members and experts who had been nominated but who had not been included on the slate. And, with Bridges-Feliz running the show, the “voting” process that was followed was an adapted version of consensus decision-making, where the proposed slate could be approved – but no other candidate could be added to the list or voted on.

One of the people who had been nominated to serve as an expert on the Council was Jonathan Goyer – but his potential candidacy was effectively rejected by Bridges-Feliz, leaving Goyer frustrated and confused. In respectful fashion, he called into question the validity of the voting process, calling it “undemocratic.”

In the heat of the back-and-forth conversations, Bridges-Feliz admitted that she did not personally know Goyer, who has been a mainstay of the Governor’s Task Force on Overdose Prevention and Intervention, serving as an expert. That led one member of the current Governor’s Task Force to ask for a clarification about what was the intended relationship between the Task Force and the new Opioid Settlement Advisory Council.

In the document establishing the Opioid Settlement Advisory Council, it stated: “[The council] will work closely with key organizations coordinating the state’s response to the crisis, including the Governor’s Overdose Prevention and Intervention Task Force.”

The apparent lack of knowledge exhibited by Bridges-Feliz about Jonathan Goyer and his role as an expert for the Governor’s Task Force – his advocacy for recovery housing, his lived experience, and his leadership as a peer counselor, all seemed to raise questions about how the chairperson viewed the ongoing relationship between the Advisory Council and the Task Force and the recovery community.

In a conversation after the meeting, one source expressed worry that the new Opioid Settlement Advisory Council was, like many “bureaucratic inventions,” seen as a bright, shiny new object, and all the history and hard work accomplished during the last eight years by the Task Force was going to be “disregarded” by the Advisory Council in making funding decisions.

Red flags
From ConvergenceRI’s perspective, having reported on the recovery community for more than a decade, the apparent “ignorance” demonstrated by Bridges-Feliz raised a number of red flags. By admitting she didn’t know Goyer, it raised the question about whether there was an apparent lack of “curiosity” to find out who he was and what were his qualifications, before rejecting him from her slate of recommended candidates. Furthermore, given the amount of publicized advocacy efforts by Goyer over the past decade, one might question  how experienced Bridges-Feliz is on the issues of opioid-related drug overdoses in Rhode Island.

What was missing, in ConvergenceRI’s opinion, was any kind of proper interview process that might have made sense to accompany the development of a slate of potential candidates for positions on a council that would be making funding decisions involving tens of millions of dollars. Twenty-four nominees and applicants were accepted, yet only the chair-reocmmended five were an option for approval.

There are some critical funding decisions to be made in the near-term that will greatly impact the future work of the recovery community in Rhode Island. The question is: How well educated will Bridges-Feliz be about those issues?

In September of 2021, BHDDH announced that they planned to cut some $2.3 million from ongoing programs being administered by the recovery community. The recovery community, in response, staged an intervention and walked out of the next Task Force meeting, leading to the re-instatement of funding, rescinding the cuts. [See link below to ConvergenceRI stories, “BHDDH cuts more than $2 million in funding for recovery programs,” and “Hard of hearing? BHDDH’s Charest and Gov. McKee seem to be tone deaf.”]

As one recovery community advocate pointed out to ConvergenceRI, in the aftermath of the first Opioid Settlement Advisory Council meeting, there are still many current ongoing recovery programs that are under-funded and under-staffed — seven months after the conflict over the rescinded funding cuts,

Another source told ConvergenceRI, there are still no answers forthcoming from either R.I. EOHHS or R.I. BHDDH on the details of the Opioid Stewardship Funds – an issue raised during the intervention in September of 2021. It is assumed that the state has significantly underspent this fund by millions of dollars since 2019,  while treatment capacity decreases and the workforce shortage continues.

Another participant in the Council meeting, a long-time member of the recovery community, raised a number of pointed questions about the process of electing a slate of predetermined candidates.

Goyer, the source said, was/is one of the designated experts on the Governor’s Task Force, since the beginning. “His extensive and wide-ranging lived and professional experience and system knowledge make him more qualified than any one on the slate or anyone else that we can imagine,” the source said. “His exclusion is so incomprehensible that we can only conclude that he was blackballed,” adding, “You can quote me on this.”

The source continued, asking: “Why was the Council presented with a predetermined slate, instead of being given all the names prior to the meeting and given the opportunity to vote from all the nominees?” According to the source, it was “clear” that the intention was that there would not be any alterations to the proposed slate.

Finally, the source called the experience a “very managed and cynical exercise,” reflecting how R.I. EOHHS and other state agencies think that community involvement should work, in the source’s opinion.

Although the selected five experts and community representatives are qualified, the methodology used to choose these members of the Advisory Council  seemed to undermine the concept of trusting community input, another source shared with ConvergenceRI.

What the future holds
Even as the process for disbursing funds from through the Opioid Settlement Advisory Council moves forward, with apparent plans to invest as much as $8 million in the coming months, the political reality is that the shape of the government agencies heavily involved in the process, particularly R.I. EOHHS and R.I BHDDH, as well as the R.I. Department of Health, may undergo significant changes in the next few months, given the contested Governor’s race, the anticipated potential retirement of Director Richard Charest from R.I. BHDDH, and new appointments pending at the directorship levels at R.I. EOHHS and the R.I. Department of Health.

To read the complete story, go to: http://newsletter.convergenceri.com/stories/opioid-settlement-advisory-council-may-have-stumbled-out-of-the-starting-block,7244