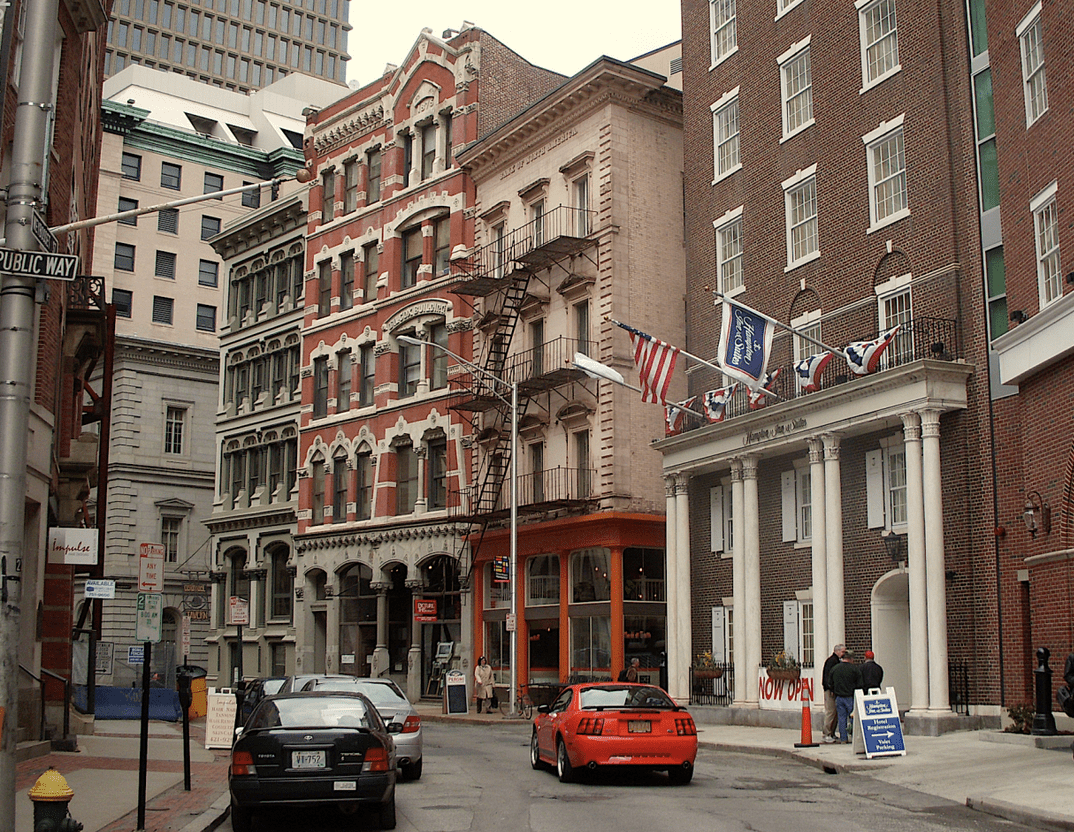 Weybosset Street, just as it curves into its merger with Westminster Street, in downtown Providence, surely is the apex of beauty in this historic city. On a fall day in 1984 I emerged for the first time from the Providence Arcade (1828) onto Weybosset, turned my head left and beheld the view pictured above: two sets of building facades facing across the narrow venue, all completed between 1856 and 1927, all between four and 11 stories, all embellished in the high and variable style of that era. At that moment I fell in love with Providence.

Custom House, an even narrower street, hangs a right off Weybosset, which along this stretch is one way heading northeast. It is where I dined en famille at Pot au Feu last night, and is, if anything, even more elegant.

It may be less than a block in length, cut short after its burst of elegance by a sad several acres of parking lots, but Custom House Street merits a spot on the list of a dozen architecturally intact streets in Rhode Island’s capital, in Chapter 11 (“Lost But Not Listed”) of my book Lost Providence (2017). These streets are minimally, if at all, marred by parking lots or modernist buildings. The intact streets include downtown streets first – Weybosset, Westminster, Washington, Custom House, Dorrance, Eddy, Union, Mathewson and Empire – and then Benefit, Hope and Broadway.

It is a partial list; other streets downtown, on College Hill and in other parts of town deserve a place on the list. Most of Chapter 11 is devoted to descriptions of 14 buildings that probably deserve chapters unto themselves as one of the ten best lost buildings had my analysis cut this way or that. Or, as the March 27, 2014, column that inspired the book puts it, “[H]appily, the chief difficulty of identifying the city’s ten best lost buildings was that so very many are not lost at all but survive to grace the streets of our fine downtown.”

The fabric of these streets rivals and in most cases surpasses, in intactitude, those of more famously preserved cities in America, such as Charleston, Savannah, Portland (Maine), parts of downtown Boston, and others. Most of these cities are rightly celebrated for their intact historic neighborhoods, and for intact historic districts within their downtowns, but their downtowns as a whole have been far more blighted with modern architecture and vast parking lots than downtown Providence, which, it should be noted, extends to historic fabric just across the river on College Hill that rivals, in size and quality, historic neighborhoods anywhere in the country.

The website Bankrate recently listed the 20 best U.S. cities to live in 2022. Providence ranked 7th. The citation didn’t mention the city’s beauty, but it did add, curiously, that “[t]his small-state city is poised to become an even bigger draw if plans for a new downtown riverwalk become reality.” Huh? When was this actually written? I haven’t mentioned the extraordinarily beautiful river walks and a dozen charming bridges, designed in styles sympathetic to the city’s heritage, along the intimate, newly uncovered rivers separating downtown from College Hill, but they were built in 1990-96. What could they be referring to? One famous urbanologist saw the river walks when they were new and wrote that they were a century old.

I toot the horn of a great city in spite of its leaders’ concerted efforts over more than half a century to ruin it with the self-same parking lots and ugly modern architecture. Testifying to the resolve embodied in its historical fabric is that in spite of the scores of insensitive development projects erected over the years, the city appears resolutely old. Some day, when our dear planners come, willy-nilly, to understand the good sense of building in styles that preservationists once laid down in front of bulldozers to protect, the city will correct its errors and build a future even more beautiful – and therefore more successful – than its shambolic recent decades.