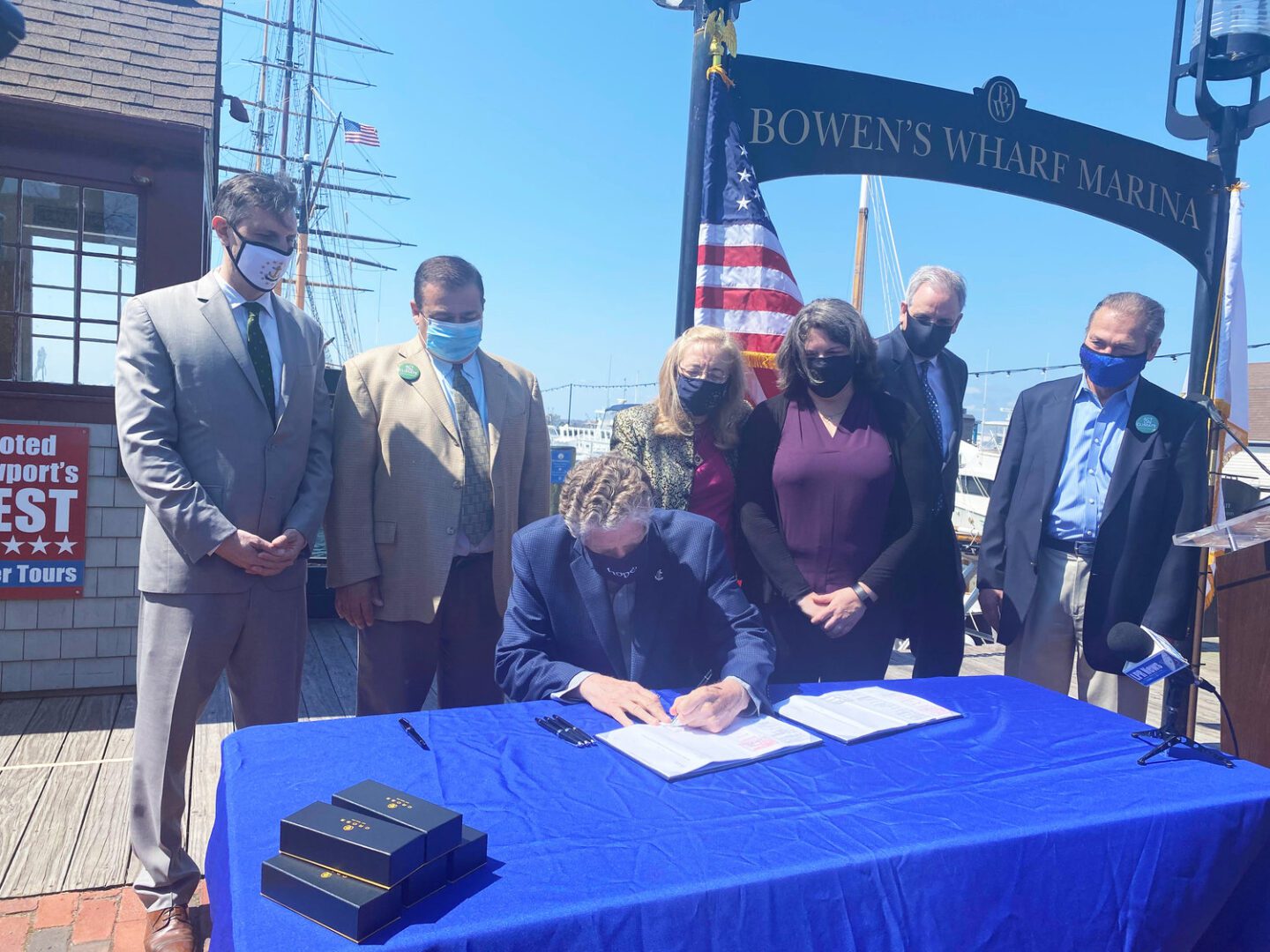 A sea change in Newport – and in RI – Richard Asinof

ConvergenceRI attended the signing ceremony for the new Act On Climate law, held at Bowen’s Wharf in Newport on Saturday, April 10. It proved to be revelatory about the sea change that has occurred in politics in Rhode Island.

First, R.I. Gov. Dan McKee gets it. At the signing ceremony, McKee began by paying tribute to the late Erika Niedowski, his one-time communications director, saying that he wished she could have been there to witness the signing of the Act On Climate bill into law. It was a remarkably poignant moment.

“The science is undeniable,” McKee continued, speaking in plain English, endorsing the state’s effort to put words into action by setting zero emission goals by 2050. “The Ocean State is on the front lines” of fighting climate change, McKee emphasized.

The public political alliance with Neronha, who has billed himself as the state’s public health advocate, seemed particularly telling, given all the push back from Republicans, who put out scads of misinformation about the new law, claiming falsely that it could lead to a flurry of nuisance lawsuits. All the noise seems to have backfired; the converse also appears to be true: when it comes to climate change, many Republicans in Rhode Island still don’t get it.

The time to act is now
Equally telling, McKee and Neronha joined with all of the elected officials behind the podium in showering praise on the critical role that advocates played in pushing to enact the legislation. Shekarchi paid tribute to Amy Moses, formerly of the Conversation Law Foundation, for her persistent advocacy. Ruggerio lauded the passionate advocacy of his colleague, Sen. Euer; in turn, Euer returned the compliment, saying that Ruggerio was always willing to listen.

Magaziner called the Act On Climate law a pathway to thousands of good-paying jobs and a transition to a green economy, with the need to reduce the state’s reliance on fossil fuels.

Moving forward
Perhaps it was the warm spring April weather that was infectious, but the other notable sea change observed was in the attitude by the McKee communications spokespeople – a sharp contrast from the tight command-and-control under former Gov. Gina Raimondo. McKee said he welcomed the opportunity to sit down and do an interview with ConvergenceRI, and unlike with Gov. Raimondo, odds are that it will happen.

The questions that need to be asked:

Will Gov. McKee play a leadership role in supporting efforts by community advocates from Allens Avenue in promoting an initiative to plant trees to restore the canopy in South Providence? How does the new law align with efforts being led by Buff Chace and Curt Spalding to scope out a plan of climate resiliency for Providence? As the state’s public health advocate, will Attorney General Neronha pursue new legal actions against industry polluters of Narragansett Bay? Will FERC consider revoking the permit of the Enbridge natural gas compressor station in Weymouth, Mass., given the continuing leaks and emergency shutdowns that have plagued the facility?