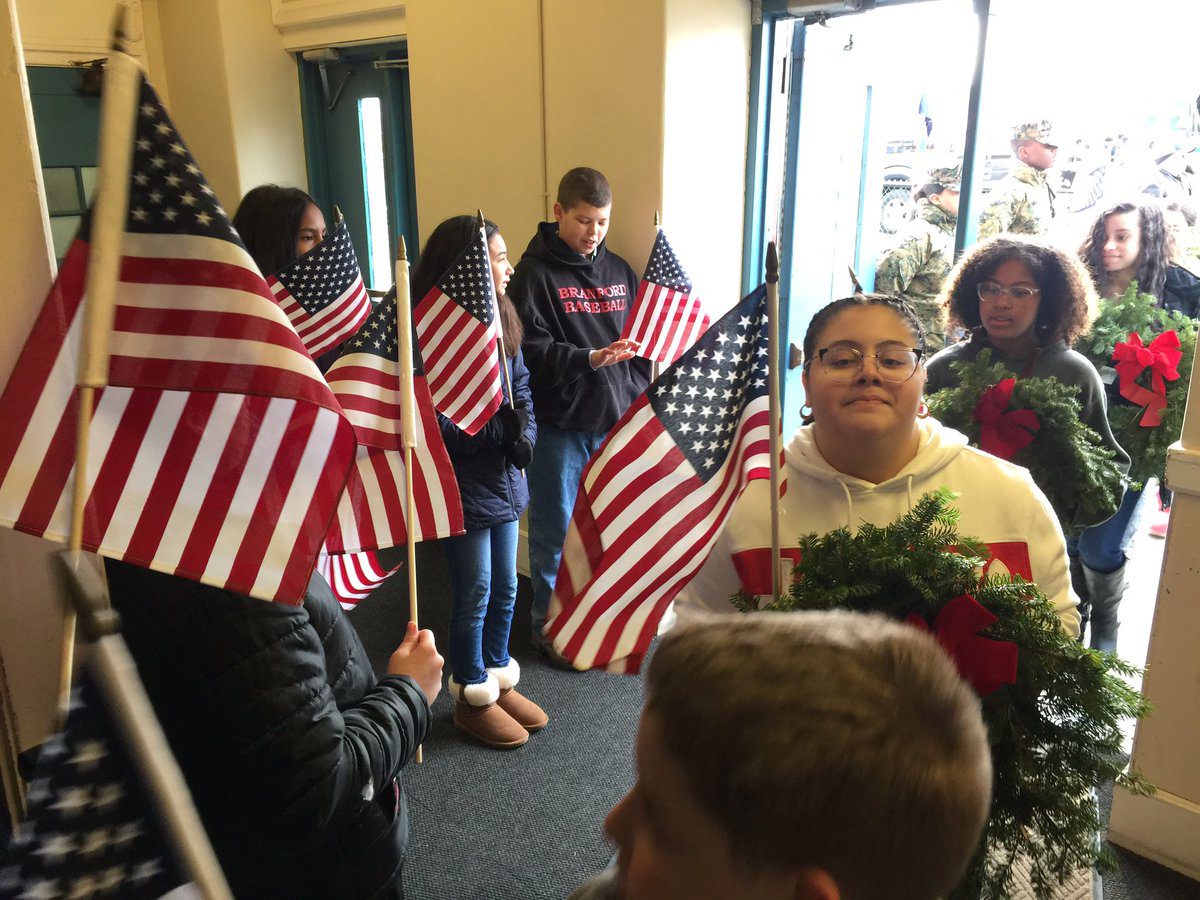 A School Seen in a Different Light – by Jim Raftus

We have all been reading about the horrendous conditions at Rhode Island’s public schools for decades. Some reports have described chaos and confusion in classrooms locally. Because of these reports, it was with a jaundiced eye that I attended the Goff Middle School’s Wreaths Across America ceremony on December the 13th.

As I parked my car across the street from the familiar building (I grew up two streets away in the 1950’s and 60’s), I saw every top knob of the long metal fence which surrounds Goff adorned with an American flag. The side yard was filled with practically every student from this middle grades school. Other students lined both sides of the walkway patiently holding full sized flags on long poles forming a promenade for visitors and honored veterans. Students were also unloading a truck of boxes containing the many wreaths for later distribution. Everything was orderly and efficient.

Are these the unruly sixth, seventh and eighth graders I’ve long heard and read about? Scuttlebutt has it that middle school is…“where we lose them.”

The program began once we were all seated inside the packed auditorium. Two students, Emma Such and Chesney Scarpetti, deftly performed a short, poignant playlet, “Ragged Old Flag”, paying honor to a battered, but unbowed flag. I am a veteran who has served my time. I love my country but am wary of overt jingoism. This little scene struck a wonderful tone of reverence and respect which was maintained throughout the ceremony.

The Goff Middle School Chorus then gave us a strong rendition of our National Anthem and it was on to the adults who handled most of the presentations and speeches. The program was impressive, highlighted by tributes to two wonderful World War II veterans and Pawtucket natives, Raymond Gannon and Chrispino DiCarlo, who were in attendance. Proclamations from the Governor and our state Senators were bestowed to them for their service. White roses were also presented to the many Gold Star family members in the audience. Melissa Coutu, mother of Goff graduate PFC Kyle Coutu who died in Afghanistan, gave a remarkable and brave presentation. It was the first time she had spoken of her loss in public. Keynote Speaker and decorated veteran Joshua Chissini gave a vivid picture of the call to duty and the obligation to our fellow citizens.

All marvelous, however, in reflection my mind keeps going back to the kids. How purposefully they fulfilled their duties from bringing the wreaths up for presentation at the stage to lining up somberly holding the military boots to remind us of those who are now gone. The ceremony lasted slightly over two hours and I saw nary a snicker or eye roll. I heard not one giggle the whole time. They were immersed, invested in the meaning of the day.

In the school library were displayed multiple projects the students had worked on for weeks prior to the event. They had created personalized, custom greeting cards of good wishes to be sent to current military members. They had collected snacks and non-perishables to be shipped as well. To them this was more than a one day event.

Although I’d not attended before, this was the 3rd Annual Wreaths Across America event at Goff. As in past years after the ceremony, a busload of students and faculty went to Slater Park and placed wreaths at the Pawtucket’s 21 Heroes monument and other individual memorial plaques nearby. A long, hopefully fulfilling day for these youngsters.

The administrators and teachers at Goff Middle School are doing a wonderful job with these students we place in their care. Kudos to them and the many adults involved with the Wreaths Across America campaign.

The three word theme for this year’s event is; Remember/Honor/Teach.
I know I will long remember this day. It was an honor to observe. It taught me to have hope in our future.