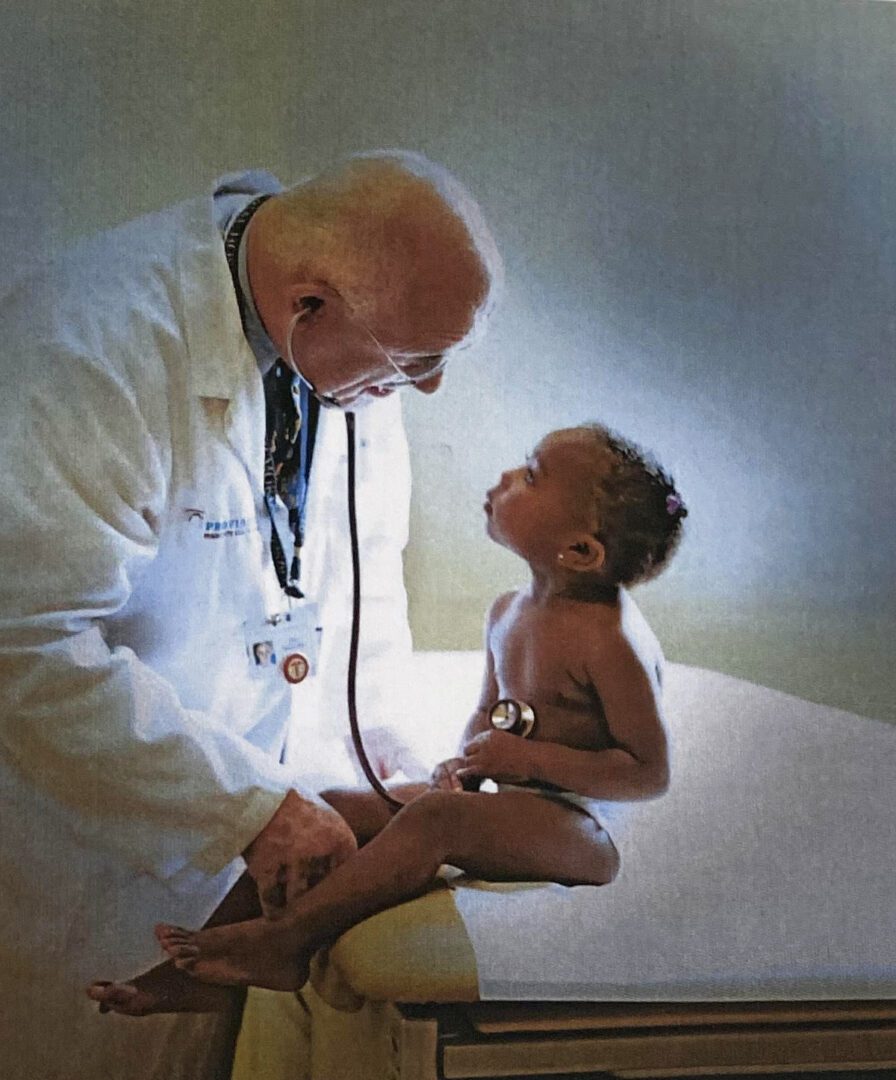 A life well lived by a pioneering pediatrician – by Richard Asinof

Photo: Courtesy of Families and PCHC – Dr.John Moran with a patient

The gathering on Saturday morning, May 22, at Swan Point Cemetery celebrating the life of Dr. John Moran, was filled with music, stories and reminiscences, sharing reminiscences about a life well lived.

Moran, 78, who passed away on May 5, had served as a pediatrician for more than 47 years at Providence Community Health Centers, the first full-time employee of the community health center, beginning in 1973.

More than 100 participants, including family members, doctors, nurses, former colleagues, neighbors, sailing and quahog enthusiasts, and musicians, share memories about Moran. [One tidbit in his obit was the fact that Moran had been the bass player in the group fronted by Taj Mahal in Western Massachusetts when Moran had been an undergraduate at the University of Massachusetts in Amherst.]

As one colleague described the adventuresome career path chosen by Moran: “In his obit, there’s a mention of how John was the first full-time doc that the very young health center ever hired. True stuff.”

“In 1972, Nixon was gunning to kill the Office of Economic Development and every Great Society program he could. At the last second, Sen. Ted Kennedy moved the community health center program over to HEW and thus saved it.”

“In the early years, the health center could only afford a handful of support staff. They would pay docs in private practice to come work a half-day per week.”

Who in their right mind would take a full time gig as a doc at a place where you weren’t certain about the next paycheck, and the Nixon was out to kill your meager federal funding?

Honoring Moran
In a more formal tribute, the Providence Community Health Centers’ Capitol Hill Health Center addition, which is now under construction, will be named in honor of Dr. Moran.

The new addition will provide new clinical and support space, with a goal of caring for approximately 4,000 new patients. To accommodate the additional patient volume, Capitol will be adding two new care teams by the expected completion date of December 2021.

A personal reflection
Dr. Peter Simon, a retired pediatrician who worked alongside Dr. Moran at the Providence Community Health Centers, wrote about his long-time friendship with Moran., entitled: “A friend and colleague.”

Dr. John Moran was the first pediatrician I met in 1977 when starting the third year of my pediatric training at Rhode Island Hospital. We sat together in the cafeteria at lunch and I heard a lot of what I know about John in the almost sudden way he used to talk.

I learned that he had recently arrived in Rhode Island from a stint with the U.S. Navy at Annapolis. He loved sailing and I never was quite sure why he left that job in Maryland, but it gave us something in common, since I was leaving Maryland, too, at that time.

He told me about his boat, his love of music, his training in Rochester and his work with the Providence Community Health Centers. He was an attending on the wards, an activity that I think meant a lot to him. He liked to be seen as someone who kept up with the newest and best science even as he spent almost all of his time with patients on the more mundane.

I was in awe of that aspect of his practice. Later, after taking a position with the R.I. Department of Health, I was permitted by the State Ethics Commission to work one night a week at PCHC at the request of its medical director, Dr. Stan Block, MD.

Dr. Block saw this as a key aspect of the relationship between the Community Health Centers and the R.I. Department of Health, as I remember it. I saw patients at the center on Smith Hill where John spent about half of his time.

We talked about lots of things, some medical, some social. He was interested in what I was doing and loved to talk about his skiing trips, sailing stuff and every once in a while a problem with a patient.

John never missed a Simon Lecture at the Medical School, an event based on my Dad’s belief that physicians need to be humanists in addition to scientists.

For 25 years, up until recently when Covid-19 shut it down, John a consistent, enthusiastic presence, enjoying a chance to meet the speakers and engage with young medical students.

Toby and I were frequently invited to his home for Super Bowl events as well as when he would give piano recitals at the Music House.

His friends at these gatherings were a wide range of people from all aspects of his life. He embodied the term “renaissance man” by interests and facility discussing so many things he loved.

The one story I remember best is when John talked about his frustration trying to overcome the system barriers to getting care for a child with special needs insured by Medicaid.

I had just taken a professional development course with the Association of Maternal and Child Health in Washington, D.C., and told him of a little-known part of the statute that I thought might be able to help.

John listened, and several weeks later, he told me that Medicaid was now paying for all the services that he had wanted for his patient. I remember nominating him for a Community Pediatrics award for his efforts.

I could go on. I will miss John Moran.